No going back on energy, says Finkel Review

As expected, the Finkel electricity market review sees a Clean Energy Target as the best -- and cheapest -- way forward to address Australia's energy problems while moving to zero emissions.

Declaring that “there is no going back from the massive industrial, technological and economic changes facing our electricity system,” the review of Australia’s electricity market led by Chief Scientist Alan Finkel has, as expected, recommended a Clean Energy Target as the primary mechanism for establishing a reliable and secure energy sector.

The review, released this afternoon, puts forward a significantly different regulatory framework for the electricity market composed of:

The review makes clear that the fantasy of climate denialists that coal continues to play a major role in the future of Australian energy simply won’t happen. “Australia’s coal fleet is old and coming towards the end of its design life. Investors have signalled that they are unlikely to invest in new coal-fired generation,” it says. Its modelling concludes that for both residential consumers and industry, a Clean Energy Target — which would operate like the current Renewable Energy Target, but be extended to any generation technology below an identified emissions intensity threshold, will produce lower prices than an Emissions Intensity Scheme or if the current “business as usual” scenario continues. 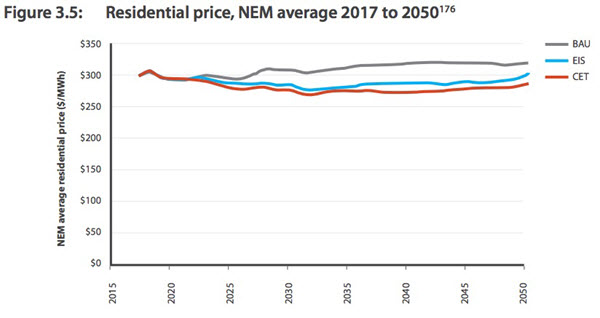 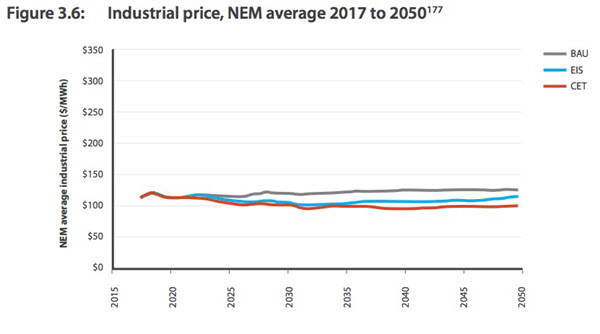 However, the review doesn’t recommend a preferred emissions threshold for a Clean Energy Target, saying this is a role for government. Coal industry rentseekers and their lobbyists, like the Minerals Council of Australia, will be pushing for a high threshold in order to ensure that current coal generation technology could be included as “clean,” defeating the intention of what the Review says should be an “orderly transition” to a zero-emissions energy sector by 2070.

The review also joins the chorus of demands for significantly greater transparency in the badly corrupted gas market, saying: “AEMO should have better oversight of gas supply contracts for gas-fired generators … Gas industry performance data should be transparent, clear and accessible.”

Some pollies and their powerful friends would have us burning coal until the last human on Earth drew breath. I live in the hope that there are enough of us with commonsense to put pressure on these dullards who impede our way to total renewables, and silence them.
My message to these “coal huggers” is here . . . .

I may have missed something, but Finkel’s report has the air of a magic pudding about it. He seems to be claiming that by pretty much doing nothing, emissions and energy prices will both go down faster than if we kept MRETs.

That hasn’t stopped the mouthbreathers on Turnbull’s back bench from screeching that they want 100% guarantees that energy prices will fall, and (if I understand them) that we must continue to burn coal.

The extremely disappointing Finkel Review is inexplicit about targets, unacceptably implies long-term use of fossil fuels, and its “Generator Reliability Obligation” implies that welcome new clean energy will have to be backed up by an unspecified amount of storage or of dirty energy. From a 5 decade career scientist below are just some of numerous major matters utterly ignored by the seriously defective and quantitatively inexplicit Finkel Review:
(1) science-trained Pope Francis and numerous climate scientists and activists demand that the human and environmental cost of pollution be “fully borne” by the polluters;
(2) Dr Chris Hope from 90-Nobel-Laureate Cambridge University has estimated a damage-related Carbon Price of US$200 per tonne CO2-equivalent, this indicating an inescapable Carbon Debt for future Australians of US$.7.5 trillion that is increasing at US$400 billion per year and at US$40,000 per head per year for under-30 Australians;
(3) Finkel-approved gas is 85% methane (CH4) which has a Global Warming Potential (GWP) 105 times greater than that of CO2 on a 20 year time frame and with aerosol impacts considered – CH4 leaks and at a 2.6% systemic leakage (circa 3.0% in the US) the global warming from the leaked CH4 is the same as for the CO2 from combustion of the remaining 97.4% of the gas; (
(4) numerous countries, states, cities, towns and corporations have committed to 100% renewable energy by 2020;
(5) numerous institutions, organizations and corporations have heeded the advice of economists like Dr John Hewson and completely divested from fossil fuels;
(6) numerous climate scientists, notably coral scientists, demand a rapid return of atmospheric CO2 to circa 300 ppm CO2 as espoused by 300.org (350.org demands less than 350 ppm CO2) from the present disastrous 405 ppm CO2 that is increasing at 3 ppm CO2 per year – but the cost of doing so by future generations can greatly exceed the present profit from pollution i.e. stop exploiting fossil fuels ASAP;
(7) also ignored are Australia’s huge greenhouse gas (GHG) exports and methanogenic livestock and land use which contribute over 50% of GHG pollution;
(8) with its existing hydro system as a hydrological energy storage, windy Tasmania should be the renewable energy capital of the Southern Hemisphere;
(9) Melbourne University-linked Beyond Zero Emissions and Professor Peter Seligman have both published detailed schemes for rapid acquisition of 100% renewable energy for Australia with thermal or hydrological energy storage, respectively;
(10) the Paris Agreement’s plus 1.5C will be exceeded in 4-10 years and a catastrophic plus 2C is now unavoidable – but we are obliged to do everything we can to make the future “less bad” for our children and future generations (for details and much more “2011 climate change course”: https://sites.google.com/site/300orgsite/2011-climate-change-course and “Are we doomed?”: https://sites.google.com/site/300orgsite/are-we-doomed ).

One major shift recommended in the Finkel Review is the focus on carbon as the problem, and on non-carbon as the solution.

We no longer have to persuade unsophisticated people that the world is not running out of non-renewables. Thus the “RET” is to be replaced with a “CET”.

The use of the word “clean” to describe low/non-carbon energy is still something of a political assertion, as for many people the word “clean” is used to forgive our copious use of gas. Perhaps that is a battle that we only need address later, as we try to close on our emission reduction targets for 2050.

The “agreed emissions reduction trajectory out to 2050” is to be achieved by gradually reducing the criterion for an energy source to be labelled as “clean”. The report uses 700 g/kWh as an example, but the changing value would be set politically (by the legislature).

An open cycle gas turbine running at 28% efficiency would emit 700 g/kWh CO2. Although the efficiency of OCGT could be tweaked to remain under the criterion for several successive reductions of the criterion, eventually OCGT will be punished out of the energy market. At that point, wind farms will have to look elsewhere to find “adequate dispatchable capacity” as their backup.