In Media Files today, the long list of staff leaving Fairfax continues, as we hear yet another gloomy forecast for the future of legacy media.

Fairfax departures. At The Age, picture editor Leigh Henningham finishes up today, and photographer Penny Stephens, who has worked for the paper since 1996, will be leaving at the end of the month, saying that the journalism coming out of Fairfax was better than ever:

“I’m especially proud of the younger women in the office who have stepped up before they maybe felt ready to and are also really changing the culture in there for the better. I look forward to this latest evolution of The Age.”

Former editor and senior writer for The Age Clare Kermond is going, and The Age‘s state political correspondent Josh Gordon and court reporter Jane Lee have also announced they will be leaving. Senior correspondent Daniel Flitton leaves this week, tweeting his regret at being unable to find his favourite article from the last 10 years, about attending a Britney Spears concert: 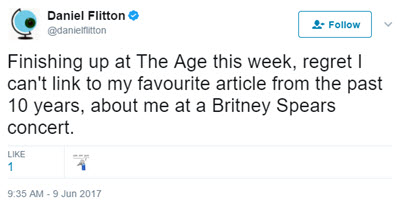 The names of those leaving will continue to be updated in this piece on the Crikey website as they are confirmed.

Gloomy forecast for traditional media. The latest global survey from accounting and consulting firm PwC has painted a gloomy five years ahead for the legacy entertainment and media sectors, with the firm suggesting they are approaching “a plateau” in which revenue growth with slow and earnings will come under increasing pressure. But watch for intelligent devices and services to emerge rapidly in the next five years.

PwC says companies in the entertainment and media sectors face the prospect of weak revenue growth — or declines — over the next five years, with mature segments like film, pay TV and television advertising under pressure and digital content expanding at a slowing rate. The big growth area will be artificial intelligence via products such as Apple’s Siri, Amazon with its Alexa device, Google and Microsoft (all the old tech names). PwC sees these products becoming more integrated in everyday life, especially mobile — all at the cost of desktop and laptop paid internet search and ad revenues.

Newspapers, meanwhile, will be getting smaller and more irrelevant.

Film will struggle over the next five years, PwC predicts, with US box office revenue only growing by 1.2% compound annual growth, increasing from US$10.6 billion in 2016 to US$11.2 billion in 2021.

As expected, internet advertising is another booming area, growing in the US, with mobile advertising set to explode. It accounted for 50.5% of total US internet advertising revenue in 2016 and will represent 74.4% in five years, PwC estimates. But even amid these riches, there will be dramatic changes, according to the survey.

Yarn of the week. ABC Tasmania’s Carla Howarth nailed her piece to camera earlier this week for a story about Cecil the “Sheep” (actually a ram, but then the alliteration wouldn’t work, would it?) and his life on the lam, which allowed him to grow the second-heaviest recorded fleece before he was caught and shorn. Snuggling up to Cecil post-haircut, Howarth delivered her script direct from the shed: 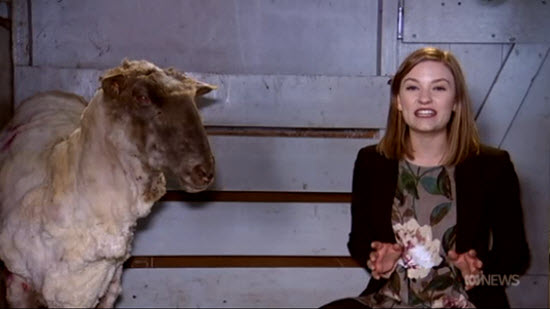 In what must surely be an oversight, the ABC hasn’t uploaded the pun-tastic package to its website, but the online yarn from Howarth’s colleagues is here.

Comey through the front pages. Fired FBI director James Comey has given evidence to the US Congress, and it’s dominated US front pages:

Body-slamming pollie says sorry. The Republican candidate in the US who body-slammed a Guardian reporter, breaking his glasses, during a recent election campaign has issued a grovelling apology and donated $50,000 to the Committee to Protect Journalists. According to The Guardian, Greg Gianforte has apologised for his assault on reporter Ben Jacobs:

“My physical response to your legitimate question was unprofessional, unacceptable, and unlawful. As both a candidate for office and a public official, I should be held to a high standard in my interactions with the press and the public. My treatment of you did not meet that standard.”

The apology was part of a civil settlement, but Gianforte still faces criminal charges.

Glenn Dyer’s TV ratings. A feat of football last night as the NRL on Nine went up against the AFL on Seven, and the World Cup qualifier was on Nine’s Go network. The NRL game between Cronulla and the Melbourne Storm (a re-run of last year’s grand final, won by Cronulla, and the second game this season between the two — the first was won by Cronulla) was won by Melbourne, the Swans beat the Bulldogs, and Australia won the World Cup soccer qualifier. The bottom line is that the NRL game was on free-to-air and on pay TV.

Media briefs: Rip it Up closes down … something’s fishy .. when Bernie bros attack …