The long list of journos leaving Fairfax continues, and the UK papers pull out all stops for their election editions. Plus more media tidbits.

Today in Media Files, the long list of journalists leaving Fairfax continues and the UK papers pull out all stops for their election editions.

March out of Fairfax continues. The roll call of journalists leaving Fairfax in the latest round of redundancies continues. Deputy news director Liam Phillips and journalist Kim Arlington have already left the Sydney Morning Herald. SMH tablet editor Connie Levett, who did a stint as Southeast Asia correspondent and has done various editing roles for the paper, has also taken a voluntary redundancy. National social media editor Georgia Waters will be leaving tomorrow after 10 years, and Herald urban affairs reporter Leesha McKenny also finishes up tomorrow. The Australian Financial Review‘s Fleur Anderson announced last night on Facebook she had also taken redundancy, saying that after 20 years as a journalist she would be moving on to something new:

“What a fabulous, fun profession! Just like our readers, I’ve been inspired, moved to tears and to anger. As always, writing about real people is the most compelling and satisfying thing a journalist can do. Lately though I’ve had a hankering to try something new. I want to be part of something that has an outcome. Something where your byline count/followers/retweets is not necessarily a measure of your success. I want to work with clever innovative people, not just report on them.”

We’ll be updating this story from yesterday with names of those leaving Fairfax as we confirm them.

Vale Jill Singer. Walkley Award-winning journalist Jill Singer, 60, has died after suffering a rare blood disorder, which was diagnosed earlier this year. Singer, who was misdiagnosed with depression, wrote for the Herald Sun earlier this year of her struggle to find out what was wrong:

“It was like being trapped in a never-ending Fellini film that could only have one possible end.”

UK press support May. Voters go to the polls today in the UK, and the national papers have mostly come out in support of Prime Minister Theresa May. 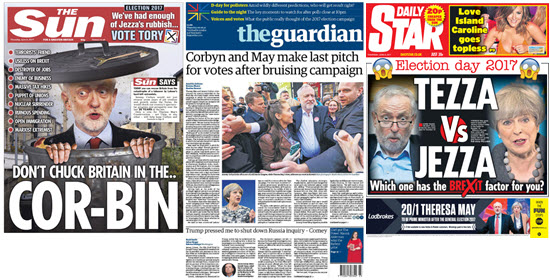 Meanwhile, the PM has caved in to veteran Channel 4 anchor Jon Snow, who complained on Twitter yesterday that May was the first in the seven general elections he’s covered to refuse him an interview. The refusal generated a flurry of attention, which Snow tweeted this morning our time had “forced her minders’ hands”: 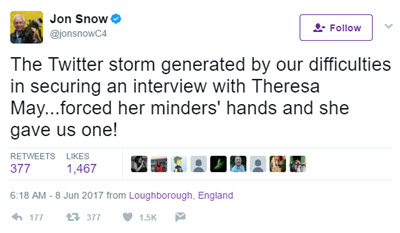 McTernan around. Who’s this popping up on Newsnight on the eve of the UK election? Why it’s our old friend John McTernan, Anglosphere Labour’s intercontinental omnishambles! What does this transcendent political genius have to say of a two month campaign, at the end of which Labour is polling between six and ten points higher than where Tony Blair and Gordon Brown left it? “Jeremy Corbyn has an appeal which cannot be ignored.” Thanks, slick. Guess that’s why you earned the big bucks running Labour campaigns in Scotland (lost control of national assembly), parts of number 10 during the cash-for-peerages scandal, Julia Gillard’s government (lost leadership, then election), Scotland (Labour wiped out) and then going into bat for Hillary. Indeed, Corbyn’s numbers are all the more impressive, given the degree to which Blairites inside and outside the party have spent years trying to destroy him.

Now, John gets cross when we point out this catalogue of disasters, so let us stipulate for the record: centrist Labo(u)r and Democrats failures have nothing to do with the people assigned to play key roles in them. The arrogance of their politics, superficiality of their analysis, cynicism towards their rank-and-file, indifference to the human cost of foreign wars, absurd striking of Churchillian/Orwellian poses, smug certainty that they “knew the mood of the public”, and their tendancy to rehire each other no matter how great or many the failures, had nothing at all to do with the internal collapse of these parties, the legitimacy of their centre, and the slow capture of them by a left they despise. It was all just a series of terrible coincidences, good people in the wrong place at the wrong time.They have not wasted years of their lives achieving the very things they sought to contest. They have no need to reflect deeply on whether their whole approach to politics is simply wrong at the root. They are not a bunch of media zombies shambling from one news org green room to the next to give three minutes of blather. They are not nothing more than hyper aggressive dimwits who forced their way to the middle, and now have to be worked around. This we are happy to stipulate. Thanks to you and all of yours for the insights. — Guy Rundle

The media elite’s echo chamber. A survey has found that media, marketing and advertising types are a bit out of touch when it comes to how most people consume social media. The survey, commissioned by Think TV — a research and marketing company founded by the commercial networks and Foxtel — found that people working in advertising, marketing and media (dubbed ‘AdLand’ by the survey) completely overestimated how much regular people use social media.

Those in AdLand thought 100% of people used Facebook, where the actual figure was 79%, they thought 89% of people used Instagram (real figure 33%), and 53% used Twitter (really 13%). The survey of more than 1600 AdLand professionals and more than 1000 “normal” people found that the industry professionals were far more into social media, were younger, more likely to shop at a local farmer’s market and to have gone for a recent swim at a local beach.

Mamamia does news. Women’s lifestyle and comment website Mamamia has been the subject of a social media pile-on with a piece about the Melbourne terrorist attack, asking why the media hadn’t been all over who the hostage was — could it be because she was a sex worker, the piece by Jacqueline Lunn asked?

Well, no, it’s because she asked not to be identified and her name was suppressed by the Victorian coroner.

The piece remains online, but has been slightly edited (without any indication it has been) to say that if even with a suppression, there would usually be more information about the woman:

“Normally by now there would be another identifier to describe her. We would be demanding to know more and, even though her identity might be suppressed, news outlets would be reacting to our curiosity. Telling us she is a mother of three. Or a sister. Or a teacher. Or a 27-year-old local. Or blonde or brunette or regarded as the life of the party or a good friend and neighbour or kept to herself.”

Glenn Dyer’s TV Ratings. A below average night — the top programs were news and current affairs which as always tells us that viewers did not find the later offerings compelling. Masterchef should have really done better — House Rules on Seven and The Voice on Nine are now approaching their finals, so the number of weekly episodes has dropped, clearing the way for Masterchef, but viewers haven’t switched back. It grabbed a national audience of 1.18 million last night. Overall Nine had won total people, Seven won the main channels and Ten did well in the demos. Seven dominated regional viewing with Seven News on 720,000 on top, followed by Seven News/Today Tonight with 570,000, Home and Away was third with 520,000, Border Security was fourth with 482,000 and the 5.30pm part of The Chase Australia was fifth with 480,000.

It was a pretty dire night’s viewing on Foxtel if we are to judge by the fourth most watched program — the 1949 release, 12 O’Clock High on Fox Classics with 58,000 viewers. That 68 year old movie was out in cinemas before I was born. It’s called raiding the vault. Still the movie helped Fox Classics to the second spot on the most watched Pay TV channels last night.

Tonight, there’s NRL on Nine and AFL on Seven. That’s why the AFL Footy Show was broadcast on Nine last night in Melbourne, Adelaide and Perth. It managed 155,000 viewers in Melbourne, a long way from the heady days when it was the most watched show on the night. It had 320,000 nationally and 245,000 in the metros and 76,000 in the regionals. Time it was sent for a long spell. — Read the rest on the Crikey website

A similar assessment can be made of the overwhelming majority of expert commentators in the liberal press here. You do not have to be an UK Blairite to be smug, superior, self satisfied, have huge self esteem and no self reflection and have a disdain for reality and observable facts, you can be an Aussie political reporter/commentator working for Fairfax or The Guardian.

Meanwhile what a surprise that Murdoch is batting for the Tories.

Does anyone who writes for Crikey read the other contributions?
Derryn Hich obviously didn’t read this, he writes above:
“And something else that really disturbed me this week: Why was the innocent woman taken hostage in Brighton been treated with such disdain? Ignored by our leaders. She had a night of terror. Was she not mentioned because she was a prostitute?”