Cousens and Marcus have a change of heart ... Bolt the (photoshopped) Pugilist ... is NDIA splashing out on PR? ...

Marcus my words. While the Vivid festival in Sydney is mostly about pretty lights, last night it included a fiery and confusing “reverse debate” about cultural appropriation, featuring Australia’s, ahem, best and brightest debating the statement, “Artists shouldn’t be restricted by cultural boundaries in creating their work”.

Speakers were required to take the opposite position to the one they personally held, which led to an interesting time for Ms Tips’ spy. It meant “Girl Friday” and commentator Daisy Cousens (whose swift transition from pop feminist to hard-right provocateur is certainly a singular example of adopting a new culture) and Sky News presenter Caroline Marcus, both had to argue against cultural appropriation. They struggled to get into the spirit of the debate, somewhat. Marcus opened her speech with typical nuance and subtlety by saying, “it goes against everything I believe about free speech and identity politics” before pegging her argument — as best as our source could fathom — to the premise that all Australians are racist, and invoking the Nazis and book burning as though it were a good idea. You know, like progressive people do. Cousens dedicated her speech to Gillian Triggs and then argued that cultural appropriation should be banned to avoid hurting anyone’s feelings.

Luckily, they had artist and illustrator Bronwyn Bancroft as their third speaker, who seemed to understand that the evening was about attempting to genuinely engage with ideas other than your own, rather than a platform for clunky satire or cheap strawman arguments. Bancroft admitted she wasn’t quite sure what her teammates had been arguing, before basing her argument on the plundering of Aboriginal art and stories in Australia. The debate, presented by  Sydney PEN and Settlement Services International, went to the affirmative team, comedian Chris Taylor, novelist Thomas Keneally and lawyer and author Deng Adut. It would appear the usually combative and forthright duo of Marcus and Cousens might have been happy to throw this particular fight.

By Odin’s Beard! Minister for Trade, Tourism and Investment, Steven Ciobo grabbed a snap with actor, Tourism Australia ambassador and professional level hunk Chris Hemsworth, and is very keen that we all see it. Looking at the pic, which has turned up in a tipster’s Instagram feed as sponsored content, we have to say Ciobo was brave in picking a pose that would not only accentuate their respective biceps — a comparison few would wish to invite — but also featured Hemsworth pointing at Ciobo and narrowing his eyes, like he’s trying to remember where he’s supposed to know him from.

While it cropped up on the tipster’s Instagram feed this week, it’s actually a relatively old pic — he originally posted the photo in response to stats — which illustrated that the Hollywood star is, who knew, quite popular — that came out in mid-May. Ciobo clearly just wants to remind everyone of that time he got a pic with a big time celeb — and hope that he becomes more memorable by association. And hey, what else is Instagram for? 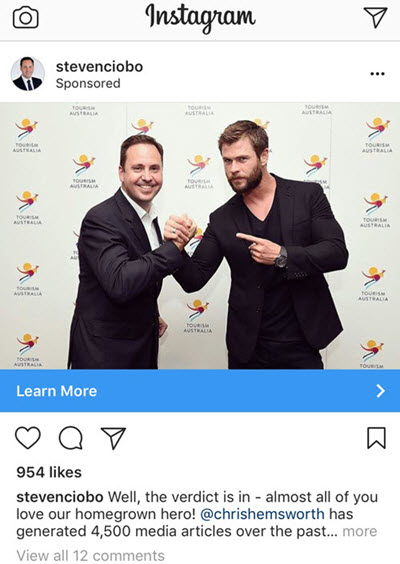 ND I guess? What’s going on at the National Disability Insurance Agency? A tipster tells us that while staff are struggling to put together packages for clients and deliver on the promises of National Disability Insurance Scheme, a “very expensive PR agency” has just been appointed to manage the agency’s image. The NDIS has recently been subject to some unfavorable media coverage — have they decided more money is needed to fix the perception of the issues, rather than the issues themselves? We contacted the agency to ask if this was true, and if so, how much money was being spent on it and they refused to confirm whether they had engaged new Public Relations firm — a spokesperson simply told us “the National Disability Insurance Agency works with a range of partners to deliver communications”. Well that clears that up then. Know more? Let us know.

Worth fighting for. The attack on Andrew Bolt has been providing a lot of material for media outlets around the country, and it should not be much of a surprise that the prolific correspondent on the topic has been none other that Andrew Bolt. Bolt’s blog has 11 posts on the subject (at last count) since it happened, and he’s talked about it several times on Sky, both on his own show and others. Just so we don’t forget he landed a few punches, today his byline in The Daily Telegraph is mocked up to place his head on the body of Rocky Balboa.

*Warning: The sight of a shirtless, glistening, muscle-bound Andrew Bolt is one you can never unsee. 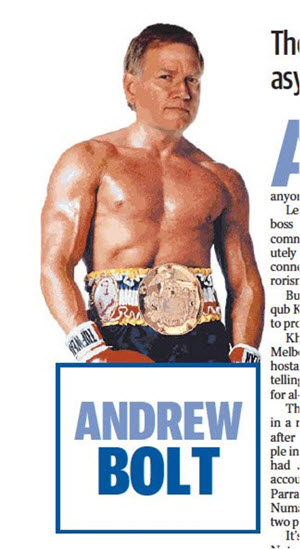 Knocked (or pushed) someone onto the ground, and while he was laying there, kicked him. Why am I not surprised?

And nobody thought to mention that this demented contemptible parasite invites stuff like this with his hate speech and his pointless blog and his pathetic TV show.

Blot had great fun a couple of weeks ago when Alan Joyce was cream pied coz he was then able to indulge himself with another homily on the violence of the left. No, I didn’t get it either but, that’d Blot.
If he didn’t exist, it would unnecessary to invent him.