Paper defends Mirabella defamation claim ... Shorten not hateful enough for the Oz ... Culleton gets what he wants (sort of)

Great heights for a story. What do you do when want that scoop? In the aftermath of the “bomber that wasn’t” drama in Melbourne last week, a couple of TV journalists wanted to get to the passengers for interviews when they were finally allowed to disembark. We hear a couple of enterprising TV journos decided to buy an international ticket so they could get past customs and security. Some of the print journalists present apparently observed, a little wistfully, that it must be nice to be able to spend that amount of money on whim. Melbourne Airport confirmed two TV journalists did buy airline tickets — although we’re not sure where they bought a flight to; “somewhere tropical” one of them apparently joked. As it turns out, it was all for nought — once the crew got past the lines, the passengers ended up coming out of the main door anyway. According to the airport, it’s not illegal to buy a ticket and not board a flight, so the reporters didn’t do anything wrong, beyond a fairly minor example of chequebook journalism that didn’t work anyway.

Mirabella tells paper to shove it. The tiny rural paper being sued for defamation by former Liberal MP Sophie Mirabella is standing firm. Documents lodged in the County Court show The Benalla Ensign plans to defend — on the grounds of truth — its original claim that Mirabella shoved rival candidate Cathy McGowan out of a photo opportunity in the lead-up to last year’s election.

Mirabella’s statement of claim said she had been “seriously injured in her feelings, her career and in her reputation” by the articles. The Ensign’s barrister David Gilbertson told the County Court that “the articles were substantially true”. True or not, the paper still apologised for the them last October, but Mirabella said this was inadequate, as the election was over by that point.

From the desk of … ?  Self-proclaimed “senator-in-exile” Rod Culleton hasn’t left parliament quietly, with attempts to convince everyone he is a still a senator. Whether it’s conspiracy theories about WA law, or applying to privy council, he’s left no avenue unexplored. Yesterday Pauline Hanson’s One Nation (PHON) sent an email alert out demanding and end to foreign political donations “now”.  Beneath the picture of smiling new PHON Senator Peter Georgiou sits the caption “from the desk of Senator Culleton, One Nation Federal Senator for WA.” 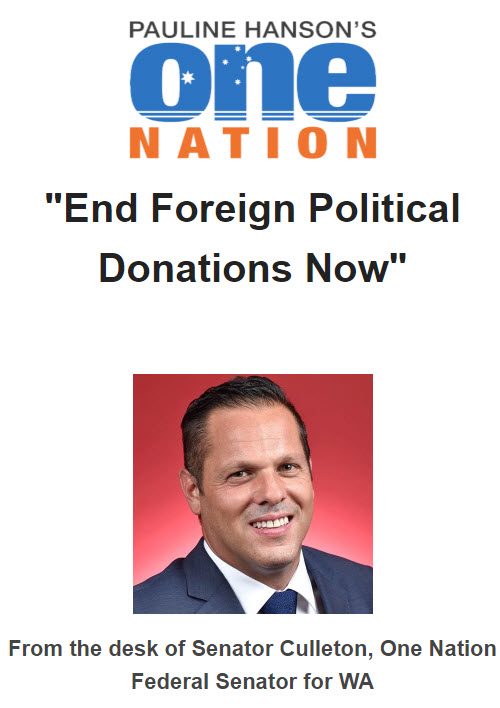 Just goes to show the power of persistence.

Shorten short on Islamaphobia, say the Oz. “Let’s not pussyfoot around this. There are some people of Islamic faith who are committing criminal acts of terror and we’ve got to call it for what it is,” Labor leader Bill Shorten declared yesterday. Strong words. But not strong enough for Joe Kelly of The Australian, who accused Shorten of the crime of not being Islamophobic enough in a front page report: “Senior Labor figures have failed in the past few days to link radical Islam with the London and Melbourne attacks,” Kelly thundered. “Bill Shorten has been attacked for failing to aggressively blame radical Islam as the root cause of a series of terrorist attacks.”

Great scoop, Joe — and we eagerly read on to see which security experts, intelligence officials or senior ministers had attacked Shorten. Alas, all we could find was Liberal backbencher and climate denialist Craig Kelly — so poor an MP he had to be saved from losing his preselection by Malcolm Turnbull — and that doughty crusader against the Rothschilds, One Nation’s Malcolm Roberts. An alternative headline for Kelly’s story might have been “extremist politicians attack opponent”. We’ll say one thing in Roberts’ defence, though. He might be a lunar right conspiracy theorist, but the bloke’s a Queenslander through and through. He must be mortified to have been transplanted south of the border by Kelly.