Alan Stokes, Rohan Connolly and Adam Morton are among big names to be leaving Fairfax, with decades of experience walking out the door in the latest round of redundancies.

Popular Fairfax columnist Alan Stokes has written his last column for The Sydney Morning Herald, as one of the victims of the latest round of cuts at Fairfax Media.

Stokes, who had written for the The Australian Financial Review before moving back to the Herald, where he’d also previously worked, wrote movingly about his battle with his mental health earlier this year — one of more than 400 columns — and wrote his final column as a “love letter” to his readers:

“A newspaper is at its core a community of readers who share a trust that what they read will be honest, open and fair; that issues will be treated on their merits, not passed through some biased filter.

“The community of Herald readers is constantly being replenished. Their loyalty astounds me. Members age and move on, while technology brings in new ones.

“I believe as long as the Herald holds true to its proud history of listening to its community, it will survive in some form. But that growth and change will occur without me.”

Cartoonist Alan Moir has been hit by the cuts, tweeting this morning that he will now only appear in the paper on Saturdays. Moir has been an editorial cartoonist for the Herald since 1984, and is a two-time Walkley Award winner. 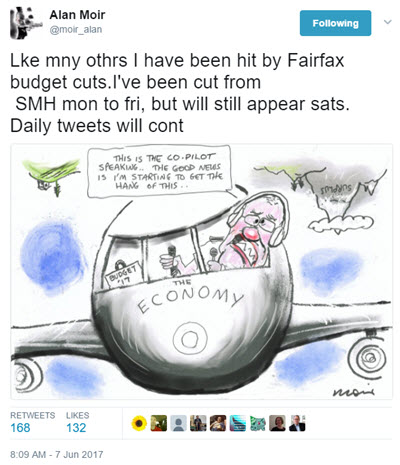 Among the many decades of experience walking out the doors of Fairfax over the next few weeks will be Sydney Morning Herald court reporter Louise Hall, who has been working for the Herald for more than 12 years.

AFL reporter at The Age Rohan Connolly also took a redundancy, and will finish at the end of the month. He tweeted yesterday that he would continue to work in radio for 1116 SEN, on the Marngrook Footy Show and some writing:

“The Age has been a massive part of my life from the time I was 22. I have loved what the place has stood for, the quality it has pursued, and the people I have worked with. But we all know these are perilous times for newspapers, and the simple facts are that after that long, this is an opportunity which I literally can’t afford not to pursue.”

Veteran music writer Bernard Zuel will be leaving Fairfax after 25 years, where most recently he’s been the senior music writer and reviewer.

Herald digital editor Stephen Hutcheon is leaving too. Hutcheon was the founding editor of the Herald‘s tablet app, and is a previous Beijing correspondent for the Herald and The Age.

Sydney Morning Herald senior journalist Kelsey Munro will be leaving this week. She has been editor of News Review, acting education editor and reported on state politics.

Adam Morton, a senior writer for The Age, also finishes up this week after 12 years, tweeting that he had enjoyed his relationship with readers, and suggesting readers subscribe.

As expected, the national video desk will be cut, with national editor Simon Morris announcing he will be leaving at the end of the week. Morris said he was “happy and sad” to be leaving.

Over the next few days, Fairfax management will be assessing whether they need to make any forced redundancies or redeploy staff in order to meet their targets. Fairfax announced in May it would cut 125 positions to help meet $30 million in savings, as well as reviewing columnists’ and other contributors’ contracts. The cuts will reduce the metropolitan newsrooms by a quarter, and prompted a seven-day wildcat strike by staff.

Fairfax did not have any comment on the departures.

UPDATE, JUNE 8, 2017: Deputy news director Liam Phillips and journalist Kim Arlington have already left the Sydney Morning Herald. SMH tablet editor Connie Levett, who did a stint as the south-east Asia correspondent and has done various editing roles for the paper, has also taken a voluntary redundancy. National social media editor Georgia Waters will be leaving tomorrow after 10 years, and Herald urban affairs reporter Leesha McKenny also finishes up tomorrow. The Australian Financial Review‘s Fleur Anderson announced on Facebook she had also taken a redundancy, saying that after 20 years as a journalist she would be moving on to something new.

UPDATE, JUNE 9, 2017: At The Age, picture editor Leigh Henningham finishes up today, and with photographer Penny Stephens, who has worked for the paper since 1996, will be leaving at the end of the month. Former editor and senior writer for The Age Clare Kermond is going, and The Age‘s state political correspondent Josh Gordon and court reporter Jane Lee have also announced they will be leaving. and senior correspondent Daniel Flitton leaves this week.

UPDATE, JUNE 13, 2017: The Age columnist Martin Flanagan is yet another of the writers to be leaving Fairfax in the latest round of cuts. Writing his last reflection published over the weekend, he paid tribute to his brother Tim, and reflected on his 32-year career in his final sports column. Walkley-award winning health journalist Julia Medew is also leaving, as is The Age‘s science editor Bridie Smith and political editor Michael Gordon.

UPDATE, JUNE 15, 2017: Sydney Morning Herald managing editor Stuart Washington is among the latest confirmed to be leaving Fairfax in the latest round of cuts. Washington is a former business writer and is the media federal director of the journalists’ union, the Media, Entertainment and Arts Alliance. Beau Donnelly will be leaving The Age this week after seven years, The Age‘s homepage editor Dan Harrison finishes up today, and digital journalist Richard McLeish has already finished, as has reporter Deborah Gough after 30 years. The Age‘s health reporter Rania Spooner will have her last day tomorrow.

UPDATE, JULY 4, 2017: With the end of financial year now past, the majority of those who took voluntary redundancy in Fairfax’s most recent round of cost-cutting have now left the company. Adding to the list, The Sydney Morning Herald’s science editor Marcus Strom will finish at the end of this week. Fellow Herald journalists Jacqui Taffel, Melanie Mahoney, Inga Ting, Leigh Tonkin, Natalie Hambly and Sarah Thomas have left the company. The Age’s Stathi Paxinos and Linda Pearce have also gone, as has Brisbane Times video producer Scott Beveridge and national digital editor Carlos Monteiro.

Where are they now: losses at News, Fairfax are PR’s gain

Even when “no jobs will be lost”, no newcomers will be getting jobs either. By failing to find a way to pay for our reading, we are losing an entire profession.

Not the profession but a nasty cancerous growth on the profession.
Good journos. will not be short of outlets, the stenographers can go do something more useful like pick oakum.

Not sorry to see Martin “metaphor” Flanagan leave the Age. Of all the departures over the past years sports writer Peter Hanlon is the most sorely missed. He was the single best sports writer at the Age, now a thin and miserable shadow of its former self. Mr Flanagan thought he was a sports journalist and historian whose main research technique was to quote someone else, usually comprising a simplistic platitude ( “he was the best”, etc etc)
I used to be a morning paper boy, delivering papers from the bike and the old Saturday Age was a huge pain in the arse being so large it couldn’t even be folded over. The end is nigh I’m afraid.

I can’t agree with Mr Pola. Martin Flanagan has been an ornament to The Age for a very long time. His writing on Aboriginal issues and individuals has been invaluable to reconciliation and is deserving of recognition via the Australian Honours list.