A free ad for Foxtel on its new streaming service, SBS axes its comedy website. Plus more media tidbits.

Today in Media Files, a free ad for Foxtel in the News Corp papers, SBS axes its comedy website and community radio hosts dumped over a saucy song.

News Corp’s free ads for Foxtel. The News Corp newspapers have snapped to attention to promote the relaunch of Foxtel yesterday with a new look, new logo, new offerings and a relaunch of its poorly received streaming video service, which has been renamed Foxtel Now (and not Presto, which flopped). Stories this morning in The Australian, as well as the tabloids’ websites, all pushed the company line — that this is wonderful, the best thing since the last relaunch (with Presto) with the common theme of how the new offering of Foxtel Now is aimed at Netflix (as was the previous launch).

The story in The Australian by David “Lurch” Davidson, the paper’s media editor (News Corp PR) was typical, but contained an intriguing sledge of the 50%-owned family company: “The broadcaster, once an expensive and aspirational brand, is being repositioned to reflect the introduction of cheaper subscription packages that don’t require a cable or satellite connection,” Lurch wrote.

What Lurch failed to mention was that this is the second attempt to attack Netflix, Stan and the kitchen sink. Its previous attempt was in the Presto joint venture with Seven West Media that couldn’t get traction and was folded last year at a cost of more than A$60 million in losses and write-offs, and upwards of 100,000 subscribers in the final six months of 2016. Presto was launched in March 2014 and killed off in January of this year as mounting losses and low subscriber numbers meant it couldn’t compete against Nextflix, Stan and the streaming services offered by the free to air TV networks.

Nor was there any mention in the reports of the US$227 million (more than A$300 million) write-down of the value of its 50% of Foxtel in News Corp’s accounts. And in true News Corp fashion, there was also no acknowledgement of that failure and the impact on Foxtel subscriber numbers  — yet another attempt to gild the lily where subscriptions were concerned.

The loss of 100,000 subscribers in the final months of 2016 was the biggest drop in Foxtel subscriber numbers for years, and that resulted from the failure of Presto (and helped trigger the huge write-down by News Corp).

Foxtel Now replaces Foxtel Play as a streaming service, but with fewer channels available — another fact Davidson missed when claiming that the new service would have all Foxtel’s channels available. — Glenn Dyer

SBS axes comedy. SBS has announced it will cut comedy site The Backburner from next week, instead focusing on video funnies. Creator and head writer James Colley tweeted the news yesterday to a flood of commiserations: 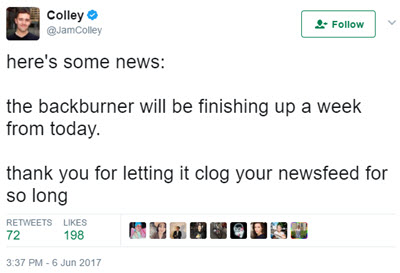 SBS boss Michael Ebeid told Senate estimates the broadcaster had recently reviewed its websites and would be restructuring, with comedy resources likely to be moved over to TV program The Feed. He said there would be some staff changes, including some contracts that would not be renewed.

SBS did not respond to Crikey‘s request for comment before deadline.

Community radio hosts dumped over saucy song. A community radio pair have been unceremoniously dumped from their program just hours before they went to air over the weekend because a song they’d played the week before was too rude. Jank and the Phatman, who have hosted a show on Mt Gambier’s 5GTR for the past year, played a 1989 track by No Face, called Hump Music, which contains 29 F-bombs and some pretty graphic sexual references, just before 11pm. The pair, Steve Jankowicz and Haydon Cox, were told at 6.30pm on Sunday via text from a board member, they would not be allowed to broadcast that evening or to enter the station premises. Jankowicz told Crikey this morning they had been given the green light to play whatever they wanted in the evening slot, and they had played much worse, including songs with references to rape and torture.

“We’ve played songs about far worse. It’s a 1989 house rap song that’s a piss take. It’s a bit of fun,” Jankowicz said. “We’re just a couple of boys that wanted to play some music we love.”

The text sent to the pair, seen by Crikey, said the song was “in complete breach of broadcasting standards and common decency”.

5GTR did not respond to Crikey‘s request for comment this morning.

MVP for terrorism talking heads. The big news stories of the past few weeks have been terrorism-related — there was the Manchester attack, the coroner’s findings on the Lindt cafe siege were released, the topic came up in Senate estimates and a National Press Club address, there was an incident at Melbourne airport, the London attack over the weekend, and, in the last couple of days, another attack claimed by Islamic State in Melbourne. And there are only so many experts in Australia to pad out all the coverage. In fact, it could just be one expert. Greg Barton, Chair of Global Islamic Politics at the Alfred Deakin Institute for Citizenship and Globalisation, has almost single-handedly been handling talking-head responsibilities for Australian broadcasters over the past couple of weeks. He appeared no less than 36 times in the last two weeks, since the Manchester attack on May 22 — including a couple of New Zealand radio slots — from breakfast through to evening slots and pre-recorded interviews. He’s been busiest over the last couple of days, with nine interviews each on Monday and yesterday, including two breakfast shows (Fran Kelly on Radio National and ABC News Breakfast), radio slots during the day and wrapping up with 7.30 last night.

Sputnik reporters ‘fed’ anti-American questions. A former reporter for Russia’s state news agency, Sputnik, has unleashed on the agency, saying he was directed on which questions to ask at White House press briefings. Andrew Feinberg says he was fired by the agency when he refused to investigate the unsolved murder of a Democratic National Committee staffer, which some right-wing media outlets have been reporting was related to a leak to WikiLeaks. In an interview with CNN, Feinberg called the outlet “state-controlled”.

Sputnik reportedly said his comments on the agency were conspiracy theories. Watch the full interview here.

Glenn Dyer’s TV Ratings. An easy win to Seven nationally, in the metros and regionally — Nine ran out of top tier programs but Ten battled on and did better than on Monday. Nine’s Love Child continues to die. Tonight sees the even weaker (and far more appalling) Last Resort appear in Nine’s line up at 9pm. In rating terms that is a well-named program, just as The Biggest Loser describes struggling Ten.

Even though Seven did well last night, its Achilles is the performance of the 6pm to 7pm news hour on the East Coast (Brisbane, Sydney and Melbourne) where Nine beat Seven easily. That is starting to become a trend and should be a concern for Seven management. Nationally its a different story, with Seven News’ hour clearly dominant and producing national wins every night (and national will be the name of the game if and when the audience reach limits are removed). — Read the rest on the Crikey website

Business bites: betting it all … on the ball … oh, what a recall …

The TV-free generation and its role in the NBN debate

Should the Murdochs be allowed to expand their Australian power?