A street in Hebron in the West Bank. Photo by Bernard Keane

Less than one and a half hours from Jerusalem, Gaza is like a different planet, literally cut off from the outside world. Its 2 million residents, suffering huge electricity cuts, polluted water (a recent Oxfam report details Israel’s refusal to allow vital equipment into Gaza to fix infrastructure destroyed by the Israelis) and high unemployment (affecting both Gaza and the occupied West Bank) are often forgotten, seemingly doomed to be permanently separated from the West Bank and Israel.

The 50th anniversary of the Israeli occupation of Gaza, the West Bank, Golan Heights and East Jerusalem will be celebrated in Israel this week as liberation — biblically inspired. Palestinians remain under an Israeli regime of house demolitions, ever-expanding illegal settlements (there are now an estimated 700,000 settlers living in occupied territory) and strict controls over daily life. The Palestinian, political leadership is old, corrupt, complicit with Israel and out of touch.

Palestinian President Mahmoud Abbas is currently in his 12th year of a four-year term. During his recent visit to the White House, both he and President Donald Trump spoke in motherhood statements about peace but offered no concrete path to create it. A just, two-state solution is dead on arrival; decades of Israeli settlement building killed it. The status-quo is one state, with one rule and law for Jews and another, less equal reality for Palestinians. Trump’s recent Middle East tour offered little more than weapons for Arab dictatorships.

Australia’s role in the conflict is small but significant. Successive governments in Canberra, both Labor and Liberal, though the latter has been more proudly belligerent in Israel’s corner, have offered carte blanche to Israeli actions.

Foreign Minister Julie Bishop wrongly questions whether Israeli settlements are illegal under international law (they are, and a UN resolution in December proved that the entire world, except Australia and Israel, knew it). During Israeli Prime Minister Benjamin Netanyahu’s recent visit to Australia, talk of “shared values” was in the air. This was fitting for two nations that ethnically cleansed their indigenous populations and have yet to fully acknowledge, let alone compensate, the victims. 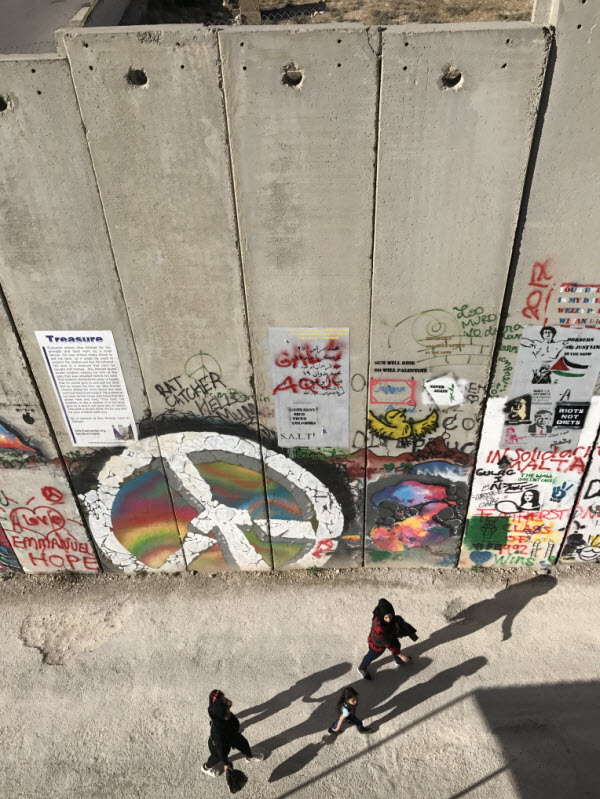 The effect of Australia’s obsequiousness towards Israel, yet another example of Canberra blindly following Washington’s lead around the world, is the danger of being both on the wrong side of history and out of step with public opinion. Israeli settlement expansion has pushed Palestinians in the West Bank to the brink. Australia and many Western nations have spent decades enabling this policy. Australia’s Ambassador to Israel, Dave Sharma, spends his days channelling Israeli propaganda on social media and palling around with extremist, Israeli politicians. The result is a Jewish state that currently feels no pressure to change.

There are, however, signs of change. The latest poll in the US finds that two-in-five Americans now back sanctions against Israel, and Australian citizens, according to a recent Roy Morgan poll, are both opposed to Israeli settlements and supportive of the boycott, divestment and sanctions (BDS) movement.

During a recent visit to Gaza, my third since 2009, I witnessed a population more frustrated than ever before. With the threat of another war with Israel always on the horizon, many in the Israeli military and government are itching to bomb the Gaza Strip again. “Mowing the grass” is the euphemism used in Israel to describe this perennial obsession with attacking the area. The people in Gaza are unable to plan their lives because of it.

I met many locals who didn’t know if they’d be allowed out of Gaza. Israel routinely blocks departures for spurious reasons and the Egyptian border is mostly closed (reflective of leaders in the Arab world, who for decades have paid lip service to the Palestinian cause but done little to practically support it). It’s now not uncommon for couples to marry with one partner in Gaza and the other somewhere else, Skyping into proceedings. They hope to be reunited soon after the event.

Perhaps the most shocking aspect of Gaza today is the desire of so many people there to leave. After years of isolation, it’s an understandable feeling. Not convinced by the rhetoric or actions of the Hamas government, the party operates a police state in the territory, and distrusting Israeli intentions, finding a better home elsewhere is necessary, especially for young people. But the opportunity to depart is mostly blocked by forces beyond their control. Time passes, frustrations grow and lives are stunted. It’s a recipe for future conflict and radicalisation. 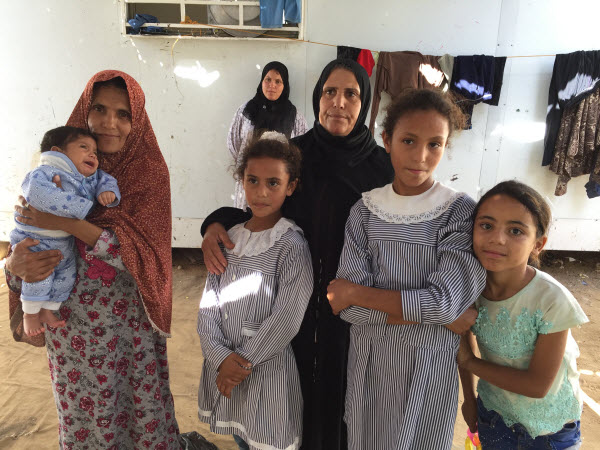 Family in Gaza displaced during the 2014 war with Israel. Photo by Antony Loewenstein

Sitting at her desk in Beit Lahia, Gaza, Aesha Abu Shaqfa battles to be heard above the sound of Israeli fighter jets roaring overhead. She worked as the executive director of the Future Development Commission, a local NGO committed to empowering women. It’s a lonely path in a territory devastated by war, Israeli and Hamas intransigence, misogyny and deprivation.

Wearing a red hijab, Shaqfa recently told me that one of her main goals was to reduce the prevalence of childhood marriage. “In our culture, girls having sex at 14 is not rape so we try and educate the girls about the challenges they will face [when married]”, she said. “Girls at 14 do not know about sex and they think marriage is sweet words, a pretty dress and make-up. The divorce rates of 14-18 year olds, for boys and girls, are rising.”

Domestic violence and sexual abuse against minors and adults are worsening because of regular Israeli attacks, social instability, conservative Islam and high unemployment.

Shaqfa, who is divorced from her second husband, acknowledged the huge challenges in Gaza for achieving gender equality. “I have three brothers and a father and only one of them can make sandwiches and tea,” she explained. “Here, women serve men.”

But she told me that big changes had occurred in the last years, a sentiment I heard echoed across Gaza, despite three wars with Israel since 2007, a repressive Hamas government and suffocating, 10-year siege imposed by Israel and Egypt. “More women are now finishing education, getting work and we’re trying to educate young girls at secondary schools about women’s rights,” she said.

I’ve been living in Jerusalem since early 2016 and returning regularly to Israel and Palestine since 2005. My first book, My Israel Question in 2006, challenged the myopic racism of the establishment, Jewish community and in 2013 I co-edited a collection, After Zionism, that outlined alternatives to discriminatory Israel.

Palestinians are rarely heard in the Israeli media as anything other than a security threat. Arab voices are almost invisible and most Israelis never meet a Palestinian except when they’re serving in the army.

[No free lunch: what journos learned on their Israel junket]

Jerusalem is a divided city, with Palestinians in East Jerusalem subject to discrimination and constant house demolitions. Tel Aviv is a beachside city that’s known as a bubble away from the conflict. Decades of conflict, privatisation and disaster capitalist policies have resulted in poverty being one of the highest in the developed world.

Racism is state-backed and encouraged by the highest levels of the Israeli government, knowing it’ll receive domestic support. Bigotry and incitement against African refugees, Palestinians and minorities is common, reflective of a country that was light years ahead of Trump’s war on Muslims. Trying to maintain a Jewish majority in Israel, or Christian rule in the US, requires discrimination and exclusion. Such policies are the antithesis of liberal democracy. Far-right groups in the US and Europe, traditional enemies of Jews, are increasingly enamoured with Israel due to its hardline against Muslims. Israel often welcomes these new friends.

This is not without controversy, with Israeli human rights lawyers pushing for transparency over arms sales to repressive states such as South Sudan. When I lived there in 2015, in the capital Juba, I regularly heard about Israelis visiting the country to liaise with South Sudanese officials. Its government stands accused of genocide. 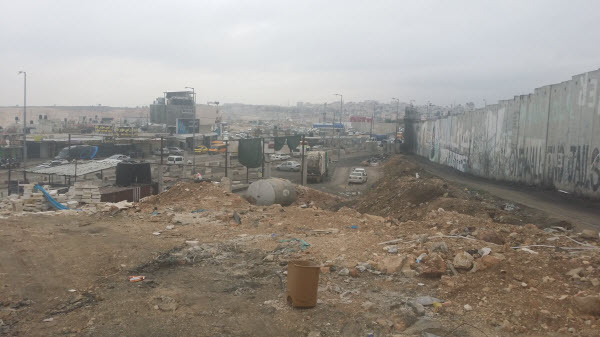 The Qalandiya Checkpoint, between Jerusaleum and Ramallah and the northern part of the West Bank. Photo by Bernard Keane

The 50th anniversary of the 1967 Six Day War will be marked in illegal, Israeli settlements, a perfect place to commemorate colonial acquisition. A recent poll found that Israeli settlers are the most satisfied of all Israelis with their lives. Many liberal Israeli Jews I know are disillusioned with the situation and looking to leave; they have no hope that Israel’s future will be anything other than a far-right theocracy.

From the beginning of the 1967 occupation, voices of dissent were rare. Euphoria was in the air and dominating the Palestinians without full civil rights was defended as necessary. Little has changed since.

During extensive time with Jewish colonists in the West Bank last year, I found arrogance but surprising insecurity about their long-term situation. Yair Ben-David, living at Kashuela Farms near the Gush Etzion settlements, told me that, “the Western world is at war with radical Islam”. He said Palestinians under occupation “know that Israel is the best place to live,” compared to the rest of the Arab world, and they should be grateful for their situation. “Only Israel is helping the Palestinians,” he claimed. We spoke on a hot day while sheep, goats and rabbits roamed around the settlement. Ben-David always carried a loaded gun.

Despite his knowledge that the Israeli army protected his settlement, and without them he would be unable to survive, he said that he was “greening” the environment for the sake of the Israeli state. If he were forced to leave, because of a peace deal with the Palestinians, he would “resist, though not with a weapon. I would eventually go.”

The situation feels hopeless on the ground but there are rays of hope. Israeli attempts to destroy the global Palestinian solidarity movement has failed. Jewish dissent in the US and beyond is surging, no longer content being associated with a Jewish establishment that offers uncritical backing of the Israeli state. A major step towards change will involve educating Jews and others that occupying the Palestinian people for 50 years isn’t the actions of a normal, healthy state. Without outside pressure, as many Israelis and Palestinians tell me, the situation will never change. Israel’s biggest supporters are increasingly the Christian far-right and far-right fanatics.

Occupying nations never give up power voluntarily. Remember, South Africa was economically squeezed for years before it capitulated and ended political apartheid. Israel is facing a growing global movement aiming for a similar transformation.

*Antony Loewenstein is an independent journalist and author of Disaster Capitalism: Making A Killing Out Of Catastrophe

14 thoughts on “‘The situation feels hopeless’: 50 years of Israeli occupation”