Fairfax journalists learning about their voluntary redundancies. And other media tidbits of the day.

Today in Media Files, Fairfax journalists are learning whether their applications for voluntary redundancy will be accepted, and ABC broadcaster Mark Colvin has been remembered at a service in Sydney.

Fairfax redundancies. Fairfax journalists who applied for voluntary redundancy have been finding out yesterday and today if they’d been successful, and their leaving dates will mostly be staggered over the next four Fridays to June 30, before the new financial year. A handful of applications have been knocked back. Fairfax announced it would be making 125 positions redundant from the Sydney Morning Herald and The Age last month (including 10 people who had already left), prompting a seven-day wildcat strike.

Crikey understands that close to enough applications were made, so there’s likely to only be a handful of, if any, forced redundancies to meet the target. Decisions about whether there will be forced redundancies, and where they will be, will be made over the next few days. Some applications were made at the Australian Financial Review, which was not originally included in the plan for redundancies, but the majority are from the metro papers, the SMH and Age.

Remembering Mark Colvin. Friends, family, colleagues and friends of Mark Colvin gathered yesterday in Sydney for a memorial service for the broadcaster, who died last month after a long chronic illness. Leigh Sales, Tony Jones, Jenny Brockie, Michael Carey and Jess Hill all remembered their friend and colleague and kind, loving and generous. A video compilation of tributes to the long-time PM presenter from foreign correspondents remembered the high standards he held them to, with Middle East correspondent Ben Knight talking about “getting Colvined” — asked questions during live crosses you’re unprepared for.

Mary Ellen Field, who donated a kidney to Colvin, spoke of her friend via video link, and Prince of Wales Hospital nephrologist Zoltan Endre, who knew Colvin through his treatment at the hospital, captured his sense of humour by telling of a donation Colvin wanted to make. Endre said he had been worried about the promised donation of commode chairs, which are attached to  toilets to make them more comfortable for patients. “I was assured the text he wanted inscribed on the chairs was, ‘Enjoy this comfortable crap, courtesy of Mark Colvin’.”

Wrong bearded white guy. In a brief error by the AFR yesterday, a Laura Tingle piece based on comments made by former foreign minister Gareth Evans was illustrated with an image of Professor Hugh White, from the Strategic and Defence Studies Centre at Australia National University. White is a columnist with The Age and commentator on foreign affairs, but he was not quoted in Tingle’s article. 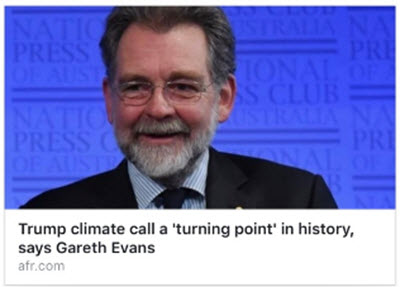 For the record, this is Gareth Evans: 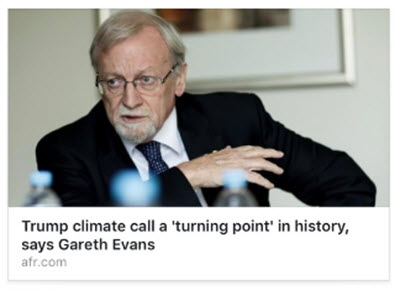 Surprise! Daily Mail‘s dog-cooking video is distressing. A grisly Daily Mail Australia article has been found to be in breach of the Australian Press Council principles. The article, under the headline, “Horrific moment a dog is BOILED ALIVE and Chinese villagers rip out its fur in clumps before incredibly it gets up and runs away”, which included a video of a dog in a steaming wok and trying to get away, and descriptions of the graphic video, was found to “substantially offensive and distressing”, despite warnings of graphic content. The council found that while there was a legitimate public interest in highlighting the inhumane elements of the dog meat trade in China, this did not outweigh the offense and distress in the article. The article was still online this morning without a link to the Press Council adjudication.

Ten’s China links. It’s not often we find that a paid lobbyist for a foreign government is a director of a major Australian media company, but that is the situation at the embattled Ten Network where Andrew Robb, the former federal Liberal Party trade minister has been a director representing Gina Rinehart (and her loss-making investment on the on TV group’s board). Robb also represents a company that Fairfax Media says is closely linked to the Chinese Communist party run government.

Robb was appointed as a non-executive board member at Ten Network Holdings as Gina Rinehart’s representative in July last year, three weeks after the election. Robb had announced his retirement last year and said he would not be re-contesting the Melbourne seat of Goldstein which he had represented since 2004.

In October the ABC reported that Robb was to become a “high-level economic consultant” with the Landbridge, the Chinese company that now operates Darwin Port. This appointment was never announced by Robb or Landbridge. Fairfax this morning has reported that Robb had been consulting to Landbridge chairman Ye Cheng before the election.

Robb joins Kerry Stokes, the Seven West Media and Seven group Holdings chair, as being closely interested with the Chinese government and the country’s government. Stokes’ Seven Group holdings is the Caterpillar franchise owner in north-east China, a shareholder in the China Agricultural Bank, and has had media joint ventures in Shanghai with local media groups. — Glenn Dyer

Glenn Dyer’s TV Ratings. A mixed night, but not for Nine which found a success with True Story. It topped the metros, just in front of Seven’s House Rules. Ten’s Masterchef suffered, as did Ten, and the ABC had its best Monday night for more than a month. True Story managed 1.82 million viewers nationally (including 1.28 million in the metros and 545,000 in the regions which was pretty good for a new program). Seven’s House Rules did better though with 1.99 million nationally (which will rise over 2 million after the seven days viewing figures are factored in as well as a massive 772,000 in the regions). Ten’s Masterchef though could only manage 1.03 million and again had fewer viewers than Have You been Paying Attention (1.04 million). That meant Ten slipped in the rankings to fourth in the metros behind the ABC in the main channels.

The ABC’s news and current affairs line up had its best Monday night for weeks with the ABC News and 7.30 doing better — the much promoted Four Corners story on Chinese money in Australian politics managed to grab 993,000 national viewers which was OK — but behind the offerings on Seven, Ten and Nine. — Read the rest on the Crikey website

Not surprised the wrong photo was used for Gareth Evans. Every time I see Mariano Rajoy in a group photo I wonder why Gareth Evans is mixing with European leaders.