The Tele wants you to work for free ... Petraeus' clumsy rehabilitation in WA ... Liam Gallagher will not let the terrorists win ...

WA Liberals have a short memory A few weeks back, Fairfax reported that former CIA head David Petraeus would be visiting Australia and addressing the West Australian Liberal Party. Petraeus is a convicted criminal best known for leaking secret information to his then-girlfriend/biographer Paula Broadwell, which led to him losing his job and getting a wrist-slap penalty. Since he was forced out, the foreign policy establishment has worked assiduously to rehabilitate Petraeus, who has become a business figure to be almost literally wheeled out to impress clients of private equity firm KKR.

Today, The Daily Telegraph revealed Petraeus would also be addressing the federal Liberal party for a fundraiser. Amusingly, the journalist failed to explain exactly why Petraeus had lost his job. What amuses us about the attempt to wipe clean Petraeus’ sordid criminal history and the risk he posed to national security is the people doing it. The foreign policy establishment railed at Wikileaks and Chelsea Manning for leaks (of non-top secret material) that revealed war crimes — but Petraeus, who leaked top secret material just to impress his girlfriend, is feted. Who can forget the State Department’s biggest Australian fanboy and WikiLeaks critic Michael Fullilove welcoming Petraeus to Australia in 2015? And now the Liberal party, which two years ago passed laws specifically targeting the “insider threat” of whistleblower intelligence officials, is welcoming the prince of leakers. Perhaps Petraeus will share some insights on how pillow talk can lead to egregious violations of national security.

Meet Julie Bishop for $20,000. With no snap mid-year election this year to delay it, the 2017 Midwinter Ball will go ahead next week on June 14. The most glamorous event on the Australian political calendar is particularly notable for politician/journalist dance partners (there’s a metaphor for something there, we’re sure) and the charity auction. The auction items were announced this week and re-using the big ticket item from last year (who said this government wasn’t interested in renewables?) you can bid on having afternoon tea and a tour of the lodge with Prime Minister Malcolm Turnbull, or share a bottle of wine and a chat with Opposition Leader Bill Shorten and Deputy Leader Tanya Plibersek (both items starting at $5000).

For those with a real attachment to available charities and a bit of cash to spare, a business class trip for two to Hollywood to attend the “G’Day USA Gala Ball” on the Qantas table and meet Foreign Minister Julie Bishop will set you back at least $20,000. Two tickets to the AFL grand final including pre- and post-game hospitality in the “1st Class luxurious September Club” starts at a comparatively frugal $1000. There’s no items for those wanting to hang out with crossbenchers or the Greens, and the events (while glamourous in Bishop’s case) lack the quirks of previous years. Proceeds will go to a number of charities, including Lifelife, Karinya House and the Stroke Foundation.

She works hard for no money. The Daily Telegraph, The Sunday Telegraph and News Local have teamed up with job placement agency (or “recruitment matchmakers”as they insist on calling themselves) I Want to Work to create I Want Work Experience. With the stated plan of creating “1000 job placements in 30 days,” the program appears to mirror the “gig economy” model — the website acts as a conduit, connecting businesses with applicants, and as far as we can tell, not playing much further part — except with work experience, so most likely not paid.  So is there any kind of vetting, or monitoring of the businesses using this site? The website is sketchy on the details.

While we’re on the subject, how long do these unpaid placements last and are the young people involved actually students? The website offers a worrying example in its blog section: “To many the concept of working for free seems like a complete waste of time. Why work for six months without pay when you can work in a bar or retail job earning $28.50 an hour?” Indeed, why would (and how could) anyone work for six months for free?

Crikey asked I Want to Work whether there was any vetting of employers, limitations on work experience engagements or on the industries that can use it, or if there is any follow-up with employers after an applicant is accepted. A spokesperson told us:

A spokesperson confirmed that they do not vet employers before hand, but if they received any reports of “untoward practices” those users would be removed from the site. They added that all industries were welcome to use the site.

Wiki ways. So it turns out, in very specific circumstances, at least one person at the Department of Human Services is actually pretty fussy about details. The @AussieParlEdits Twitter feed, which monitors anonymous edits to Wikipedia from Australian parliamentary and government IP addresses noted this morning that someone in the Department of Human Services attempted to anonymously edit Senator Pauline Hanson’s Wikipedia page.

On the “talk page” (a forum for discussing improvements) for Hanson’s article, an editor with a DHS IP address expresses their frustration at the difficulty they face adding Hanson’s Facebook group to the page. The poster senses something bigger at play — a Wikipedia-wide, anti-social media conspiracy: “After looking over Wikipedia I have hardly found any references to social media at all. It’s as if Jimmy Wales is scared of competition and deleting them … Wikipedia claims to be an open unbiased source of knowledge so where in the hell are the social media links?”

A Hanson fan and a conspiracy? Who knew?

Brotherly … love? In the darkest days of 1940, when a German invasion looked imminent, Evelyn Waugh was told by an officer friend that a soldier under his command had requested leave to compete in a ballroom dancing contest. “Do you realise the Nazis may be here in a day?” “But we’re in the semi-final sir!” With that perverse version of the Dunkirk spirit in mind, Liam Gallagher deserves a mention. He took the time amid the Ariana Grande concert for Manchester following the bombing to give the people what they want: an attack on his brother Noel, later summarised in a tweet: “Noels out of the fucking country weren’t we all love get on a fucking plane and play your tunes for the kids you sad fuck” 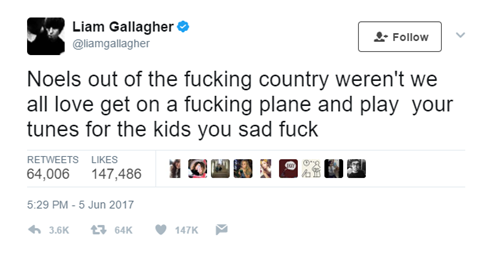 Truly, they will not change us.

I’d be afraid of blue fibres from Lady Asbestos getting into my lungs.

And for me Lady Penelope would have to be no strings attached.