Court has had many opportunities to talk about how she's being silenced on marriage equality ... Hugh White undermined by his own publisher ... Bunnings in hot water?

Lowest prices are just the beginning? Is Bunnings about to start defending its advertising claims about just how low their prices really are?

We hear that Hardware Australia, the peak body representing hardware industry in Australia, is meeting with the Australia Competition and Consumer Commission (ACCC) to advocate for Australia to follow New Zealand’s lead in going after Bunnings for false and misleading advertising. Bunnings is facing 45 charges from the Consumer Commission of New Zealand. The Australian watchdog has previously considered charges against the hardware retailer, but declined to pursue them. In the aftermath of the charges in New Zealand, an ACCC spokesperson told the AFR: “We will continue to follow the proceedings and any consumer reports of concerns but at this stage do not intend to reopen past consideration.” Hardware Australia refused to comment on whether the meeting with the ACCC is going ahead.

Well that’s timing. Spare a thought today for Hugh White, one of the foreign policy establishment’s greatest enthusiasts for China. He used an Australian Financial Review op-ed to give Prime Minister Malcolm Turnbull a serve for daring, in a speech in Singapore last week, to “[side] with America against China in the starkest possible way” and that he “has threatened China with Cold War-style containment”. White’s been complaining for years that the US wants to “contain” China — though, as a US ambassador told Crikey once, “we don’t want to contain China, and we couldn’t if we did want to.” But White wasn’t to know when he was penning his latest screed that Fairfax and the ABC were preparing a major series on aggression and interference in Australia by Chinese government operatives and their proxies. What White should have known, but seems to have mysteriously forgotten, is that it’s only a matter of weeks since Malcolm Turnbull got into all sorts of bother with a failed attempt to put in place an extradition treaty with China — which China itself scuppered with ham-fisted threats. White, evidently, is a “what have you done for me lately?” type when it comes doing the right thing by Beijing.

Presidential proclamations. As it regularly does, Twitter provides us with another perfect illustration of the surreal times we live in. A new account @RealPressSecBot — thought up by former White House staffer Pat Cunnane and executed by coder and activist Russel Neiss — mocks up Donald Trump’s hair trigger tweets in response to world events as though they were official presidential statements, which, according to Cunnane, they are. It serves as a jolting reminder that, yes, the jabbering, semi-coherent keyboard warrior with a fondness for words in all caps and limited proof reading skills is the same person the United States elected to lead them in November of last year.

The account has tweeted three times at time of publication, so far capturing Trump’s criticism of London Mayor Sadiq Khan following the weekend’s terror attacks, and his bizarre decision to bring the issue of gun control into the debate. His observation, “do you notice we are not having a gun debate right now? That’s because they used knives and a truck!” looking all the more starkly inappropriate when beneath the phrase “Statement by the President”. 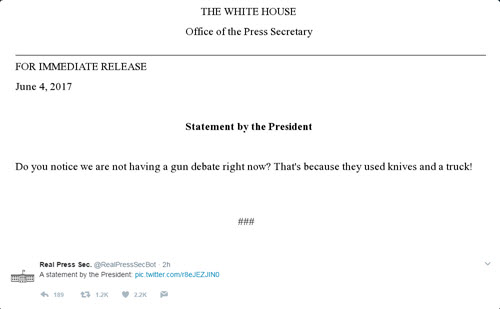 Silence on the Court. With headlines about Margaret Court’s views on marriage equality, transgender people and lesbians playing tennis continuing today, we had to ask, is this what really happens when someone is silenced?

Court (who called transgender kids “the work of the devil”) complained on Channel Ten’s The Project of being “bullied” and “persecuted” by the “homosexual gay side of people”. The next day, Court told The Herald Sun that the hosts of The Project weren’t sufficiently “respectful”.

Just how many times has Court graced the airwaves to discuss her “silencing” at the hands of “bullies”, since “breaking her silence” on Channel 9, on May 26? Between then and today, she was interviewed by Channel 9 News in Melbourne, Sky News, 6PR radio in Perth, Channel 9 Perth, Channel 10 news,  The Project, Channel 7 Perth, 3AW in Melbourne, Channel 9 Sydney, ABC Radio Adelaide, Andrew Bolt on Sky, 4KQ in Brisbane and 3AW in Melbourne again. This doesn’t count re-use of various footage by affiliated networks, or re-broadcasting of the same footage or audio across regional equivalents. It is lucky for the sake of free speech in Australia that she made it onto those stations, or we might never have been aware of just how silenced she’s been.

Colgate-Palmolive cops fine for cartel conduct, but some have soap in their eyes

If Ms Court grew up gay lesbian or transgender then she’d know the true meaning of being “bullied”. The woman should stick to tennis and her imaginary superbeings.

And of course the gibberish manual of that imaginary superbeing…if she spent a lot more hours engrossed in bible studies, and a lot less hours sticking her bulbous old nose into other people’s business, we would all be much better off.

“Well that’s timing” item. You persist in linking to Clive Hamilton’s ill-informed criticism of White’s argument. As I suggested in a comment on an earlier post, the last you could do is offer Professor White space to set out his argument. Your snide misquoting does you no credit at all.

The most blatant example of “being silenced” remains the Once & Future Champion, Blot who regularly (and frequently – not synonyms) whines about his being convict under 18(c).
This of course is totally untrue – he was convicted under 18(d) which offers a defence against 18(c) if the statements were true,accurate and in good faith.
the judge found against the Blot on all counts.