How the UK newspapers covered London's terror attacks. And other media tidbits of the day.

Terror in London. As reports of the weekend’s terrorist attack in London came to hand on Saturday night, Sunday newspapers in the UK rushed to update their front pages for later editions.

Cheap shots. The Australian has used coverage of the attacks to take a shot at the ABC in today’s media section. The double-bylined story by Darren Davidson and Sam Buckingham-Jones is labelled “analysis” and calls the coverage “slow” and saying it “refrained from reporting the carnage in London as terrorism for nearly three hours” after the attacks, which took place just after 7am AEST. The Oz‘s article said the ABC waited until 10.13am to send an alert saying it was being considered terrorism, and did not tweet the update until 10.43am. In a statement in response, the ABC said the claims were “demonstrably false” — online and the TV news channel both reported the attacks as terrorism within minutes of UK Prime Minister Theresa May confirming the attacks as terrorism, before 10am:

“The ABC was not ‘slow’, nor were we misleading or under-reporting. We were following good journalism and making considered judgements at every step.”

Hywood’s ABC hypocrisy. Fairfax boss Greg Hywood’s hypocrisy knows no bounds — he’s bagged the ABC twice in the past few weeks for daring to be “aggressively moving into the commercial media space”, and yet Fairfax is free-loading off the national broadcaster’s most prestigious current affairs program in yet another joint investigation.

The story was all over Fairfax Media at the weekend and this morning in an effort that took four reporters — two from Fairfax in the group’s gun Age investigative team Nick McKenzie and Richard Baker, and two from the ABC in reporter/producer Sashka Koloff, and the ABC’s political editor Chris Uhlmann.

In his evidence to the Senate Committee on the Future of Public Interest Journalism last month, Hywood joined News Corp Australia’s team of hypocritical hacks in moaning about the ABC. Hywood has claimed the ABC is competing for eyes against commercial media without needing to meet commercial returns, as well as directing viewers to Netflix over Stan (a joint Fairfax/Nine operation). Hywood also had a whinge about the ABC spending taxpayer money on search engine marketing — a topic News Corp has been pushing too.

But what really upsets the drones at News and Fairfax is that the ABC has free news websites, unlike their paywalled and subscription-based sites. Their plaintive moans are simply echoes of the whining in the UK by News Corp papers about the BBC (which ignore the fact that the Daily Mail has the biggest news website in Britain and the world, and it is free, and that The Sun has seen its website traffic soar once it went back to being a free site.

It seems that Hywood thinks it’s OK to do joint reporting efforts and trade off the clout and reputation of Four Corners (and 7.30 on other probes) to polish the fading image of the Sydney Morning Herald and The Age, but not for the ABC to act in a way that makes commercial sense to it and its charter. And the same can be said about News Corp and The Australian which at times sounds a lot like a jilted lover that desperately wants a date with the ABC on a joint investigation. — Glenn Dyer

Remembering Mark Colvin. A memorial service for veteran ABC journalist and PM presenter Mark Colvin will be held this afternoon in Sydney. The service will be streamed online at 1.30pm AEST. Colvin’s former colleague and current BBC China correspondent Stephen McDonnell, who won’t be back in Sydney for the memorial, has added to tributes to the broadcaster on the ABC’s website this morning.

The clockwork watermelon goes to … Batten down the wossnames. It’s going to be a big week for bad writing from the right. Tough competition, what with Clive James’ uncategorisable ramble in the Weekend Oz. But the little bird, Jennifer Oriel wasn’t to be outdone, with this effort, about, I dunno, the EU having trade deals with China or summat:

As the doomsday clock struck midnight and the world kept turning, the liberal media denied the rising sun. It was doom and gloom as the grim weepers of the populist left lamented the US withdrawal from the watermelon world order.

It is hard to pick a favourite from the weeper reel, but the prize must go to …

You, Jennifer, the prize goes to you, as always, and for ever. Your clockwork watermelon is in the mail. — Guy Rundle

US newspaper circulation, including print and digital, fell 8% in 2016 for both weekday and Sunday editions to 35 million and 38 million readers, respectively, the lowest levels since 1945. Back in 1945, 48.384 million daily papers were sold and a further 39.86 million on Sundays.

Those numbers mark the 28th consecutive year of declines for US newspapers — a fact that tells us all the moaning and groaning about nasty Google and Facebook are recent complaints — US newspapers have been losing ground since before the internet became ubiquitous in the early 1990s. If anything that 28 years of falling sales and revenues also tells us just how badly newspaper managements and owners (such as the Murdoch clan) have been in meeting this challenge. The phrase “appallingly bad” comes to mind and as we are now seeing, it is more convenient to blame Google and Facebook for their woes, rather than the startling failure to confront and adapt to the online world two decades ago.

It is not the fault of Google or Facebook. Google, for instance, has been around since 1998 — around a decade after the decline in newspaper sales and revenues started, Facebook from 2004. Newspapers had plenty of time to adapt and adopt and work out strategies, but floundered, and just turned their collective backs on the challenges until it was too late. These complaints are echoed in Australia from the sloths at News Corp Australia and Fairfax Media. — Glenn Dyer 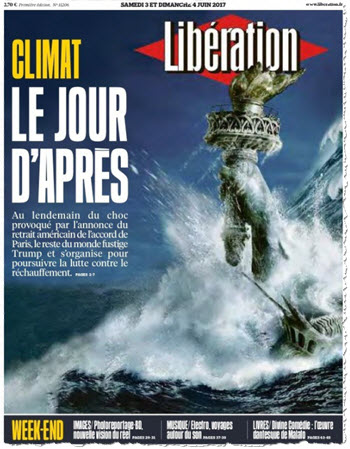 Glenn Dyer’s TV ratings. Seven’s night as House Rules had its second 2 million plus national audience on consecutive Sundays (2.05 million). It dominated Nine’s The Voice (1.43 million) and Ten’s Masterchef Australia (1.05 million) which remains flat. And that was the night after a day dominated by reporting and news on the atrocity in London.

Seven was a close winner of total people and the main channels last week, as a combination of House Rules and three AFL games in a row outweighed the first rugby league State of Origin — and its huge 3.5 million audience — on Wednesday night. Seven finished the week with a total people share of 30.7% to Nine’s 28.8%. In the main channels it was much closer — 21.4% for Seven to 21.0% for Nine.  — Read the rest on the Crikey website

Oriel is certainly in a class all of her own, every time…but I do think Crikey should give Clive James a literary award every time he puts pen to paper and doesn’t write a fucking poem.

A translation of that excellent front page from “Libération” would have enhanced the effect. My schoolboy French from over 50 years ago enabled me to read the main headline “Cimate The Day After” if I’m not mistaken. I could get the general gist of the text, proper French speakers please correct if I’m wrong: “The day after the shock provoked by the announcement of American withdrawal from the Paris Accord the rest of the world lashes Trump and organises to pursue the fight against warming.”

Hywood will find himself jilted indeed if he’s angling for a berth at NewsCorpse.
Once mudorc gets what he wants from him, selling Fuaxfux for scrap and wounding the ABC, he’ll be lucky to scrape together petrol money for his Ma$erati.