Fidgeting in question time. Financial experts are now warning that the craze of fidget spinners might be on the decline and if you want a clear sign that might be the case, we’ve got it: one has been spotted in the House of Representatives. Ms Tips spied what appeared to be a fidget spinner on the desk of member for Petrie Luke Howarth in question time on Thursday. Given many backbenchers *cough* Tony Abbott *cough* use question time to do other things like check their emails or respond to letters, perhaps a fidget spinner isn’t too bad a distraction. No word yet on whether Speaker Tony Smith considers it a prop or not.

Big names to go at News Corp? It’s not just photographers and subs getting the boot at News Corp as part of its most recent cost-cutting drive. Well-established columnists are also under review, but no word from News Corp on who is up for the chop. It’s unlikely former editor of The Australian Chris Mitchell will go, or widely read and syndicated tabloid columnist Andrew Bolt. Miranda Devine, Piers Akerman and Tim Blair also have large followings, with their own pages on the News Corp websites. Rita Panahi is a columnist for the Herald Sun, and Chris Kenny, Peter Van Onselen, Rowan Dean and Mark Day all have regular columns in The Australian. Will any of them be calling Centrelink soon? We’ll let you know when we do. And if you know more, get in touch (you can stay anonymous).

Roberts’ penis obsession. In his continued war against science, One Nation Senator Malcolm Roberts took Parliament to new lows yesterday, asking CSIRO boss Larry Marshall whether peer-reviewed papers could be trusted on climate change, referring to one titled “The Conceptual Penis as a Social Construct“, a hoax that was published in a peer-reviewed journal. “I’m very concerned about some of the peer-reviewed papers,” Roberts said. While Science Minister Arthur Sinodinos tried to get the conversation back to Senate estimates’ actual purpose — “this idea that we can jump from two specific, very specific papers to a general proposition about peer reviewed scientific findings we really are in a very Kafkaesque world”.

He closed with: “I need a biscuit.”

Inquiring minds want to know. What’s going on at Museums Victoria, the government body that runs Melbourne Museum, the Immigration Museum and Scienceworks? Crikey hears several senior people have left the organisation in recent months, and more are to come. Know more? Drop us a line. You can remain anonymous if you wish.

What’s Bernardi doing? There was Senator Cory Bernardi in Sydney on Thursday having lunch with a bunch of old male conservatives, trying to get them on board his right-wing dream team. But hang on, wasn’t the Senate sitting yesterday? With Senate estimates? So who paid for Bernardi to fly to Sydney and where did the Senator go after lunch? Back to Canberra or home to Adelaide? At whose cost? The Senator wasn’t on business relating to legislation or affairs of state. He was recruiting, according to the media report. Isn’t that a party cost? 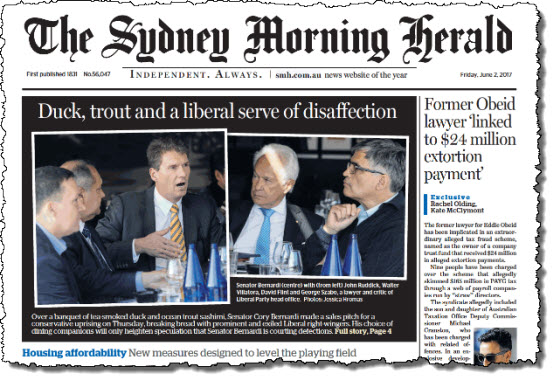 More sackings a NewsCrap, now that is good news.