Karl Stefanovic was photographed carrying rum drinks into a caravan park, and he is very unhappy about it.

Today in Media Files, Karl Stefanovic and the Daily Mail have fired shots over more paparazzi photos of the TV host, and Tiger Woods just keeps giving to headline writers.

Good feud guide. Today‘s Karl Stefanovic has been a prime target of the paparazzi and tabloids over the past few months as he went through a separation and divorce from his wife and started seeing his new girlfriend. But a story published by Daily Mail Australia, written around pap pics of Stefanovic and a colleague on the road has raised the ire of the TV host, so much so that he dedicated his morning editorial today to slamming the Daily Mail:

“The headline last night: ‘Karl Stefanovic checks into humble caravan park with a colleague and 12 cans of pre-mixed rum, but girlfriend is nowhere to be seen’. The inference: I’m a drunk. The real hurt here though is for my colleague, a young female colleague. The sleazy suggestion we are checking in somewhere and that I’m ‘settling in for a long night’. Fact: this was work. We were filming a story about our struggling prawn farmers; they deserve a rum or two. The producer pictured on the website is a committed, talented, hardworking and totally professional young woman and not deserving of this cheap, lazy, sexist online slur.” 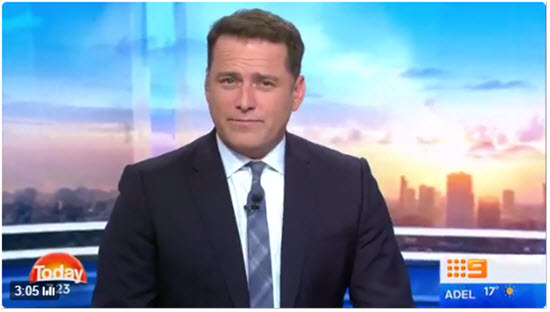 The Daily Mail has responded this morning by splashing with his “meltdown” and calling the speech a “bizarre tirade”, quoting from social media posts criticising Stefanovic and Today, a number of which call the host and program hypocritical. 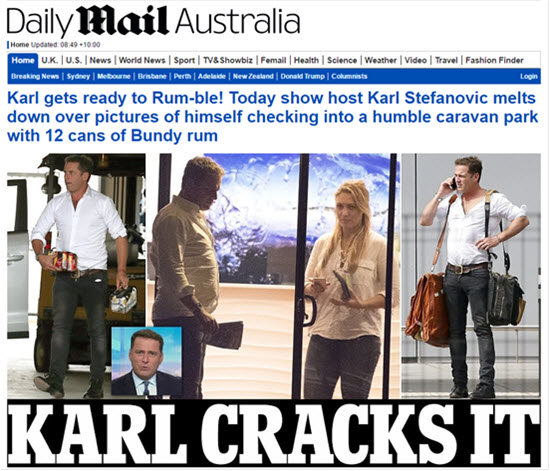 Slouching Tiger. Tiger Woods is the gift that just keeps giving for headline writers. Footage was released from his arrest by police on a DUI charge earlier in the week (Woods told officers he had not been drinking, and his breath tests registered 0.0), and full credit goes to the sub at Sydney’s Daily Telegraph who came up with this one: 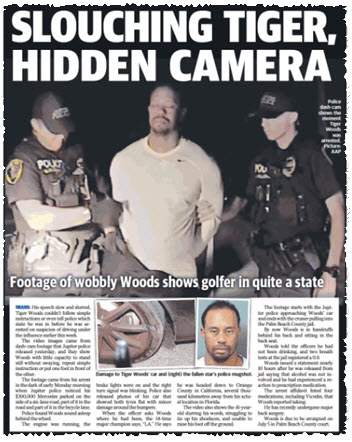 Journalists avoid jail. Two East Timorese journalists have escaped jail after they were acquitted of slanderous defamation over a mistake in an article. Timor Post journalist Oki Raimundos and former editor Lourenco Martins were prosecuted over a story about Prime Minister Rui Maria de Araujo, in which they mistakenly reported the name of a company Araujo was supporting for a government tender. They gave Araujo a right of reply and published a correction, but he filed a case which went to trial. The case was thrown out yesterday. Australian barrister and observer for the International Federation of Journalists Jim Nolan said: “We are delighted with the result and this sets an important precedent that no future press complaint will be sent to the criminal courts but will be handled by the press council. The case should never have come to this, but we hope this means it won’t happen again in the future.”

Ten risks being caught offside in soccer deal. On the face of it the news that soccer will be broadcast on the Ten Network (on its minor ONE digital channel) rather than on SBS is good news and a pointer to the future for the embattled TV network. But a closer reading is nothing of the sort. It is in fact a further deal that locks control of Ten more firmly into the Murdoch clan’s stuttering empire, does nothing to improve the network’s weak finances, and in fact will cost Australian soccer nothing if the network collapses.

Ten and Fox Sports brokered a deal for the network to become the sport’s free to air broadcaster. Ten will broadcast Saturday night games in prime time, as well as Socceroos matches. The deal starts with 2017-18 A-League campaign, starting in October, and for Socceroos games after the World Cup qualifiers finish later this year. The 7.30 Saturday night game will be broadcast live and it is expected that it will feature the best supported teams, so expect to see a lot of Melbourne Victory, the Western Wanderers, Sydney FC and the Brisbane Roar.

But the deal’s value is minor — an extra $2 million for the Football Federation of Australia (FFA) from Fox Sports (on top of the $346 million it has already committed to pay on its new six-year deal). Fox Sports will then charge Ten a fee for the broadcast, which is really a content supply deal. Ten and Fox Sports already supply the Super Rugby union, international rugby, V8 Supercars and Formula One coverage to Ten for a fee. Ten’s only other major sports coverage is the Big Bash cricket in summer. Ten has just one year left on that deal. Watch for Ten and Fox Sports making a joint bid for a new contract on that, though the benefit of that to Ten is questionable. But for Fox Sports (which is 100% owned by News Corp) it is a chance to get around the sports anti-siphoning rules. Fox Sports also has golf and tennis coverage deals with Seven.

Ten will use Fox’s commentary team, which it is claimed will give Fox wider exposure and could help it attract more subscribers during the season, although that’s doubtful given that Fox Sports has had joint broadcast deals with Nine on the NRL and Seven on the AFL, as well as deals with Ten on motor sport and rugby union and lost about 100,000 subscribers in the six months to December 31.

The reality is that the deal is a form of insurance, with insurance built into it for both the FFA and Fox Sports. The cash outlay from Fox Sports is minor (compared to the larger fee to be paid to the FFA) and if Ten goes broke then the amount lost won’t be great (I know it’s $2 million, but in terms of the $346 million it’s minor). And the FFA isn’t exposed if Ten collapses, leaving sports deal fees unpaid (the fees will be owing to Fox Sports). For Fox Sports and the Murdoch clan/News Corp, it tightens the programming control the empire already has at Ten. Fox TV in the US (part of the 21st Century side of the Murdoch empire) supplies programming to Ten (as does CBS, an unrelated company). And more importantly, Endemol Shine, 50% owned by 21st Century Fox, supplies programming to Ten (MasterChef Australia most notably), Australian Survivor, Offspring, The Biggest Loser (which is a dud) and Gogglebox Australia. By the way, Ten shares fell 5% yesterday to 18 cents yesterday. — Glenn Dyer

Glenn Dyer’s TV ratings. Seven’s night easily, despite a weak showing for the 6pm to 7pm news hour with Nine winning the metros and easily accounting for Seven News in Sydney, Melbourne and Brisbane. Seven did better in the regionals and ended up well ahead, as usual.

MasterChef Australia  had a free kick last night, as usual on Thursday’s and while it did well — 1.07 million viewers nationally — for whatever reason, viewers do not flock to it when it has no competition from Seven’s House Rules or Nine’s The Voice. 7.30 was again weak, even with an open field (except for MCA). It could only manage 704,000 viewers nationally —  including 457,000 in the metros. It is not being helped by the ABC News’ loss of audience — it could only manage 1.072 million nationally — still in the top 10, but down 200,000 or more on 2015 levels.

In AFL last night, there seemed to be only one team playing — Port Adelaide. Hawthorn were supposed to be on the ground, did anyone see them? I did notice a flash of brown and gold towards the end. Was their plane delayed? The game averaged 665,000 nationally on Seven’s main channel and 7mate. And there was a further 210,000 viewers on Foxtel. So more AFL, some NRL, a bit of cricket, and some tennis over the weekend. And the final ep of Grantchester on Sunday night. Will the Anglicans win, or will lurve win out? — Read the rest on the Crikey website

Didn’t Hawthorn have a second half win on points?

Karl Stefanovic isn’t reluctant to behave like a goose or to portray himself as one. But, in essence, he’s gutsy.

His comments (aimed squarely at the media including his own network) on not giving a toss about Schapelle Corby being back in Oz were particularly apt.