There is a stinking mess at the heart of One Nation. And whether or not it is illegal, it is very likely to be her political undoing.

Intelligence is not a prerequisite for the worthy performance of public office, but honesty is. Pauline Hanson’s apparent obtuseness could be explained by the conclusion that she’s not very bright (we are not saying that is the explanation, just that it could be), a quality that can actually be quite refreshing in public discourse. If that were the whole story, her nonsensical questions and ignorant demands (such as that ASIO should tell her what she wants to hear about terrorists, rather than the truth) might serve the legitimate desires of the voters who put her in Parliament, and all the rest of us could do would be to point out that she’s often wrong.

That construct is really the One Nation platform: honest outsiders calling shit for what it, they think, is — and demanding clear answers to uncomfortable questions. A bit rough around the edges, not a slick political party machine, but straight as the Sturt Highway. Mr Smith, gone to Canberra to tell the bastards just how sick and tired we are of their wordy words.

Hanson, as in each of her past incarnations, is clinging to her design. “Stupid questions,” she spat at reporters yesterday for daring to ask her about the growing pile of secret recordings being drip-released by the ABC, each sounding more and more like FBI wiretaps of The Sopranos. Strange obsession with money, this One Nation mob seems to have, for a party in pure service of the battlers’ interests.

For Hanson, it’s Groundhog Day, except this time it’s all on tape. No wonder she sees conspiracies everywhere; everyone in whom she confides eventually turns up on ABC’s 7.30 tipping a bucket of resentment and unusually precise recall of damning conversations on their former idol’s image. No wonder she’s going the nuclear option now, demanding the ABC be defunded or she’ll vote down the whole budget. It’s so unfair, this constant questioning.

The present count of secret recordings is three. We have:

On top of that, this morning we learn that, for several years, Hanson’s personal bank account details were listed on the One Nation website and she was collecting donations instead of the party, with no indication from funding disclosures that she spent of it on campaigning expenses.

In terms of how all this interacts with the law, the evidence so far is anything but clear. The Electoral Commission is investigating the question of the plane, the donation of which was never disclosed. Ashby maintains that he bought it and owns it, while Hanson is on ample public record claiming it as the party’s property (or sometimes hers).

In the recorded conversations, Hanson does not say who bought the plane. She tells Nelson that “there’s a story coming out in The Australian tomorrow and they’ve actually been told that Bill McNee actually donated the money to pay upfront for the office for the year and for the plane.” She goes on: “They’ve already rung Bill and asked him and he said, ‘Yep, but I’ve donated to a lot of parties.’”

Hanson then says “Who knows Bill’s name? No one, we always kept it very quiet. Who knows that he paid the money upfront for the office?”

No smoking gun there. Nor is there in Nelson’s conversation with McNee: Nelson directly asks McNee if he donated the plane, and McNee denies it, as he has to the media. The evidence in support of that proposition remains in a bunch of emails from last year. So far as the public record is concerned, the mystery of the plane is no further advanced than when I wrote about it in April.

As to whether Ashby’s scheme for making money from the Queensland election was actually put into action, he and Hanson flatly deny it. That should be easy for the Electoral Commission to sort out one way or the other. And the money she’s been collecting personally from donations may be all above board legally, but ooh it doesn’t look good does it.

This all plays out at two levels, in a very deja vu way. Back in her original incarnation as a political leader, Hanson was first brought down by allegations of law-breaking, even spending a bit of time in jail before winning her appeal. However, it was an unending stream of disillusioned MPs and acolytes with their stories of power mania, excessive control and party dysfunction that killed One Nation Mark I.

Nothing new under the sun. The murky whiff surrounding Hanson’s party and its apparent preoccupation with the public funding opportunities political campaigning offers seems as perennially prominent as Hanson’s aptitude for saying things that literally extract breath. This might turn into prosecutions for breaches of electoral laws, but that isn’t really the moral of the story.

One Nation’s support base, according to the research, has a small core of nutters but largely comprises people with jobs, houses and existential fears. They may nurse a bunch of random conspiracy theories, but they’re more concerned about how their kids will beat the immigrants to the front of the queue.

In short, One Nation voters are within the uninformed norm of society. They’ve made a relatively radical choice in who they currently support, but arguably no more so than if they went Green. They’re not rusted on. Their faith relies on Hanson maintaining her outsider status, the innocent tourist in Canberra. Her nose cannot be found snorting from the public trough; that would destroy the mirage, wholesale.

Stupid questions will continue to be asked, dodge and weave as the Senator may attempt. The trail of leaked material hints strongly of a stinking mess at the heart of One Nation. The smell is not blood, but money. It will likely bring Hanson down, one way or the other. 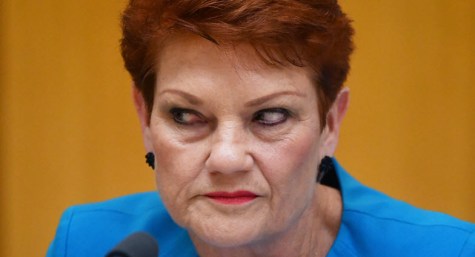 Lost me with the first sentence.

Perhaps should have said that honesty should be…

It becomes clearer every day that Pauline is a deeply cynical individual who’s in it for attention and cash.

By the hokey, Michael, I hope you’re right about PHON’s future, but I fear not: she still hates Muslims and so long as she returns to that theme every time she’ll still get the Trumpian vote.

Trump supporters don’t seem to care about his faults – eg difficulty with the truth, inconsistent statements, attitude to women, his fake university just a few examples. Why should dishonesty matter to Hanson supporters?

Because Australia isn’t America. We don’t see politics as barracking for your team right or wrong, and we have a strong suspicion of all politicians. Which is a very healthy attitude to have. If Pauline is proven to be rorting taxpayer dollars, a lot of people who voted for her will put their preferences elsewhere.

Rubbish. At least half the population absolutely view politics as barracking for their team. You see it here daily, let alone in more “mainstream” (not that Crikey is particularly alternative) media forums.

Hansonites are like Trumpsters. They’ll forgive her for anything and label anyone who criticises her as lefty ABC cucks and snowflakes. That is their modus operandi. You could have video of her stealing handbags off pensioners and snorting coke with rolled up $100 bills and they’d ignore it.

I reckon this is all just a little prequel to a full blown saga once James decides that this stream has been exhausted and will proceed with some legal action against PH (or PHON). Not making the pop-corn just yet (the job he did on Slipper was a cracker so my hopes are high for this episode of James Ashby in politics franchise).

Hanson may not be sufficiently stupid to send Ashby lewd texts nevertheless I agree with every word, LG.