Melbourne flight forced to turn back after bomb threat, MPs focus on "radical Sunni Islam", and media bosses schmooze in Canberra. It's the news you need to know, by Sally Whyte and Max Chalmers.

‘I’M GOING TO BLOW THIS F-ING PLANE UP’

An incident in which a man threatened to blow up a plane shortly after it took off from Melbourne is not related to terror, but mental health problems, police say.

Malaysia Airlines flight MH128 from Melbourne to Kuala Lumpur was forced to turn back just an hour into the flight last night after a man threatening to blow up the plane tried to enter the cockpit soon after take off.

Flight MH128 left at 11.11pm, and soon after a male passenger, described by other passengers as behaving erratically, was restrained by other passengers with belts after he tried  to enter the cockpit. The plane then landed back at Tullarmarine, where passenger Andrew Leoncelli told the ABC everyone waited until armed police entered the plane and removed the man.

“I ran to the front and confronted him around the corner and he was there and he was a tall guy, taller than me with a beanie on, wearing dark clothing, dark skin, carrying a giant thing, a very strange-looking thing with antennas coming off it, saying, ‘I’m going to blow the plane up, I’m going to F-ng blow the plane up’,” Leoncelli said.

The man is now in custody and flights have resumed after being diverted to Avalon for a period overnight.

“Sunni Islam blamed for terror plots” reads the front page of The Australian, after ASIO boss Duncan Lewis defended his comments that there was no link between Australia’s refugee program and terror threats yesterday. Prepare for those three words to be front and centre of terrorism discussions from now on in the mainstream media.

Media bosses were in Canberra last night, rubbing shoulders with Prime Minister Malcolm Turnbull and Communications Minister Mitch Fifield. It was part of a push to get crossbenchers and Labor to vote in favour of changes to media regulation. Fairfax boss Greg Hywood said:

“The reforms being proposed by the government are essential for us to grow, to strengthen and to meet the obligations we all have to the Australian community to deliver the very best media we possibly can.”

Votes controlled by Pauline Hanson and Nick Xenophon will be critical to passing the changes, but neither of them was seen at the event last night, according to The Australian.

Welfare drug tests: 10pc expected to test positive, those who fail twice will pay for analysis

New South Wales have started State of Origin 2017 with a bang, beating Queensland by 24 points in Origin 1 in Brisbane last night. The ABC describes the Blues as “too strong and too fast” for the Maroons. 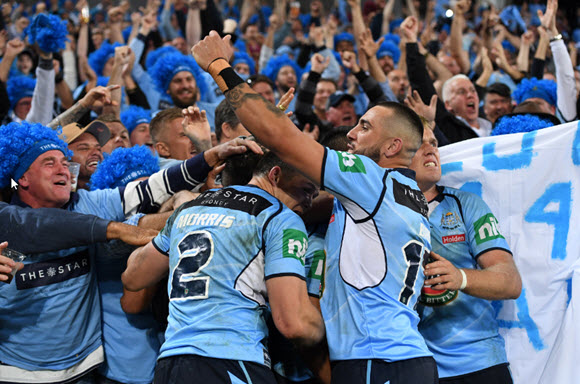 Alice Springs: The Royal Commission into the Protection and Detention of Children in the Northern Territory will hold a hearing today.

Melbourne: Mediation in the case between Channel Seven and former employee Amber Harrison is scheduled for today.

Paris: The French Open continues at Roland Garros, with Australian Nick Kyrgios due to take on South Africa’s Kevin Anderson in a second round match tonight. Aussie Sam Stosur is through the third round after a straight sets win over Belgian Kirsten Flipkens. She will meet Bethanie Mattek-Sands next.

Asia must shape the future of China — John McCain (Australian Financial Review $): “I know there is a real concern about Australia becoming entangled in a strategic competition between America and China. And I know that contributes to a belief among some in this country that your economic relationship with China and your security relationship with America may be irreconcilable, and that you must choose one over the other. I would humbly suggest that this is the wrong way to think about it.”

University cash grab is so small-minded — Michael Spence (The Australian $): “Already there are signs that graduates are entering the housing market and starting families later in life because of the weight of their HECS debts. If passed, the government’s reforms will compound this trend.”

Donald Trump is reportedly on the verge of withdrawing the US from the Paris climate accord, a landmark international deal designed to limit the warming caused by greenhouse gas emissions. Although advisers including daughter Ivanka Trump and Secretary of State Rex Tillerson are reportedly arguing against withdrawing, it appears they have failed to dissuade the president from leaving the Obama-era pact.

A massive truck bomb in Kabul has killed about 80 people. The sewerage tanker packed with explosives was detonated in a busy region of the city close to a number of foreign embassies, though the fatalities appear to be mainly Afghan civilians. The Taliban, which now controls around 40% of the country, said it was not responsible for the attack. — Reuters

Oil and gas giant ExxonMobil will be forced to report the impact that global emissions reductions will have on the company after a “shareholder rebellion” helped pass a motion at its annual meeting. The motion was opposed by management but passed with the support of shareholder groups who had lobbied for greater transparency over the impact of climate change on the business. — Washington Post

Screening of the new Wonder Woman film has been banned in Lebanon because the lead is played by Israeli actor and former soldier Gal Gadot. Films Gadot appeared in previously, including the Fast and the Furious franchise, have been screened in the country. — The Guardian

The world could enter climate ‘danger zone’ if Trump exits Paris deal (Bloomberg): “As the world’s second-biggest polluter after China, a move by the U.S. to scrap the accord involving almost 200 nations would pour hundreds of billions of tons of carbon dioxide into the atmosphere and speed up the warming trend already taking place. It also would threaten a $100 billion-a-year stream of funds that industrial nations have pledged to persuade developing nations to cut back their own emissions, endangering the political foundations of the global fight against climate change.”

The Antarctica series (New York Times): “Four virtual-reality films that take you on, above and below the Antarctic ice.”

More than the N-word: how a ‘tense’ Paul Beatty interview raises bigger questions (Guardian Australia): “Beatty was there to promote his book The Sellout: a complex, contradictory, funny, eviscerating look at race and class relations in America. It is packed with potential landmines that a white Australian interviewer, no matter how well-intentioned, cannot be in the best position to navigate – and during the conversation on Saturday it felt as though Cathcart detonated them all.”

The way ahead (Stephen Fry.com): “A great transformation of human society is under way, greater than Gutenberg’s revolution – greater I would submit than the Industrial Revolution (though clearly dependent on it) – the greatest change to our ways of living since we moved from hunting and gathering to settling down in farms, villages and seaports and started to trade and form civilisations … if you are not at the very least anxious about that, then perhaps you have not quite understood how dependent we are in every aspect of our lives – personal, professional, health, wealth, transport, nutrition, prosperity, mind, body and spirit.”