Media execs gather in Canberra for a government love-in

CEOs from 25 Australian radio, TV, and newspaper companies have lobbied the Parliament to pass media reforms they say will ensure their survival.

This week we’ve seen more ’80s cultural references aired in the halls of Parliament than when the building was first opened in the late 1980s.

Peter Stirling was still playing football, and Kylie Minogue was singing the Locomotion, we were told by politicians and media CEOs keen on updating and overhauling Australia’s media laws from the same era.

It is often said that the media who work in Parliament exist in a bubble, incapable of differing thought, and when 25 CEOs from Australia’s media companies descended on the nation’s capital to lobby Labor and crossbench senators to reform media laws, they were all singing from the same songbook. Never before had the vast swathes of mainstream Australian media united to cheerlead for the government in unison. Drinks and canapes were on hand for executives, politicians, staffers, and even working media for the event in the Queen’s Terrace in Parliament on Wednesday night.

The companies desperately want the government’s media reform laws passed by the Parliament, and the show of unity among the largest was aimed at showing the elected representatives that the changes will help save the media industry in Australia. It was a grand love-in hosted by Seven’s David Koch — who was interviewed by Ten about the event — with News Corp, Fairfax, Foxtel, Seven West, and a number of local newspapers and radio stations. It was a show of the “extraordinary diversity the media represents,” Fairfax chief executive Greg Hywood said. 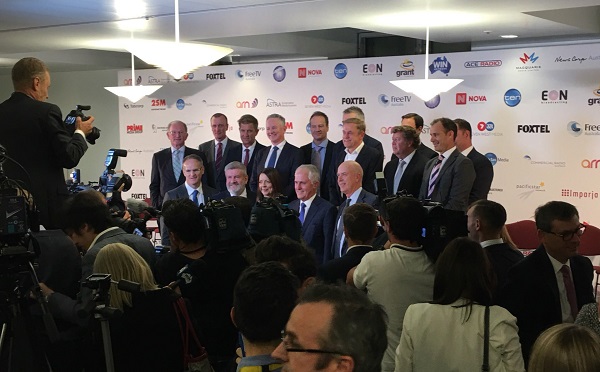 Foxtel (50% owned by News Corp) CEO Peter Tonagh complained of unnamed “global giants with unbelievably deep pockets, and unbelievable scale and technology” who have “little interest in Australian stories”. It can’t be Netflix. Netflix just invested in an Australian story.

Seven West Media’s Tim Worner, in a rare public appearance, said the show of force from media was a “momentous occasion” and said that Communications Minister Mitch Fifield had achieved something miraculous in getting something supported by “the entire media sector” [citation needed].

Nova CEO Cathy O’Connor, the one female executive in the veritable white-meat sausage fest that represented the diversity of Australia’s media landscape on that stage, was on stage too for the event but wasn’t one of the speakers for the event.

By the time Communications Minister Mitch Fifield spoke after the Prime Minister, several Labor senators — those whose votes will be crucial for the reform to pass — had left the event, seemingly unconvinced. Fifield assured those still attending that the reforms were about saving the media:

“And I know that I speak on behalf of all of my Parliamentary colleagues here when I say that we don’t always agree with what you write and print and stream and broadcast and blog and post. But we do recognise that strong Australian media is one of the important underpinnings of our democracy.”

Reform might be a long wait yet. Perhaps as long as Australians wait for Foxtel to screen The Americans.

It was a show of the “extraordinary diversity the media represents.”
Laughing out loud, here. Thanks, Josh.

As one wag on twitter described it, 15 y chromosomes and 17 x’s.
Almost evenly balanced.

Probably more about survival of the current Government if the media Cos. don’t get what they want.