Fairfax redundancies incorrectly calculated ... The Daily Telegraph. We are not lefties ... Malcolm a man of the people ...

Fairfax redundancies. The news is pretty bleak coming out of Fairfax at the moment, with word that some senior journos have put their hands up for redundancies as the company cuts 125 jobs from The Age, Sydney Morning Herald and Australian Financial Review newsrooms. Former Fairfax journo Michael West, who was forced out a year ago in the last redundancy round, controversially published an unconfirmed list of people who had sought redundancies on his blog earlier this week. It’s believed that some of those who have asked for redundancies won’t be granted them, to reduce redundancies concentrated in some departments.

Crikey understands that this round of redundancies will mean years of experience will walk out the door, with more than 100 people putting their hands up already. The two bids for the company, one from TPG private equity and one from Hellman and Friedman, have also affected the rush to the exits, with some concern that if a takeover bid is successful, redundancy obligations won’t be met.

It’s expected that people will be informed if their days at Fairfax are limited either tomorrow or early next week, which is a delay on previous estimates after some staff were given incorrect information about how much they would be paid out if they elected to take a redundancy. An email from editorial director Sean Alymer this week told staff that errors in the estimates had been identified, mostly because of the incorrect inclusion of time served as a casual employee when estimating time at the company, as well as “calculation errors”.

The email said: “We have been working as fast as possible to re-issue the correct estimates to the affected staff. In some cases, we are giving those employees extensions to indicate whether they want to proceed with their VR application based on the revised estimate.”

A Fairfax Media spokesperson told Crikey: “Calculations of redundancy estimates are a manual process using our payroll systems. We regret that some staff received redundancy estimates which overstated their entitlements. As soon as we became aware of the issues, we commenced a process to issue new estimates.”

It’s believed the company wants this round of redundancies finalised before the end of the financial year — then the big redundancy payouts will only affect this year’s bottom line.

Not taking out the trash. When the AFP announced that — oops — it forgot to get a warrant before getting a journalist’s metadata to chase a source, the AFP informed the Commonwealth Ombudsman on the Wednesday but didn’t tell the public until the Friday afternoon, in what is referred to as “taking out the trash” time, when most people clock off for the weekend. In response to a question from Crikey at the National Press Club yesterday, AFP Commissioner Andrew Colvin explained that he waited until Friday because it was when he returned from Indonesia, and he thought he should be the one to make the announcement. Colvin was in lock-step with his natsec colleague ASIO chief Duncan Lewis on terrorism. Lewis was at a table at the event with Attorney-General George Brandis.

Pollies and sportsball. It would be hard to miss the news that New South Wales was victorious over Queensland in Origin 1 last night, with the Blues raising hopes that the State of Origin tides might be changing. The lead-up to the series is a prime opportunity for pollies to show they are “just like us”, with varying degrees of success.

Deputy Prime Minister Barnaby Joyce uploaded a helpful video yesterday, explaining why he’s a cane toad through and through, even though he lives in NSW. He even referenced his maroon skin, but it’s obvious his love for Queensland is more than skin deep. 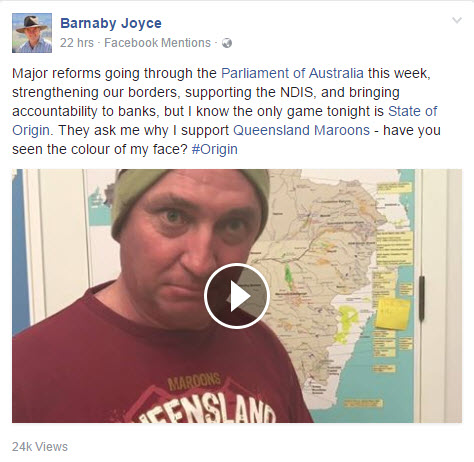 Not so convincing was Prime Minister Malcolm Turnbull, who’s struggled to look like he really means it in his previous musings about sport. In a video also posted to Facebook, Turnbull tells his deputy that he will have a moment of happiness when the Blues win. 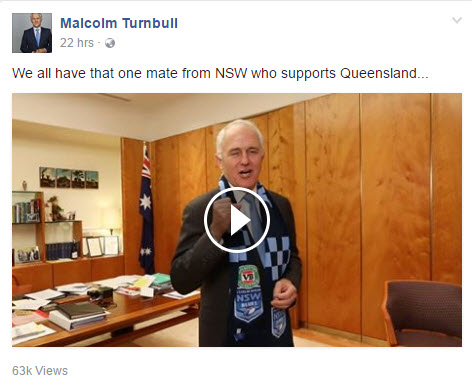 Still not sure if he knows who Andrew Fifita is though.

New tagline for the Tele. Over at Fairfax they’re “independent always”, The Australian is “for the informed Australian” and the NT News is “Your voice in the Territory”. Now The Daily Telegraph‘s political editor Sharri Markson has provided her masthead with a new tagline, defending the paper from an accusation of being part of the “media lefties” on Twitter. Markson tweeted a link to a story on Pauline Hanson’s bank accounts, only to be levelled with the terrible slur. She replied “We are The Telegraph. We are not lefties.” 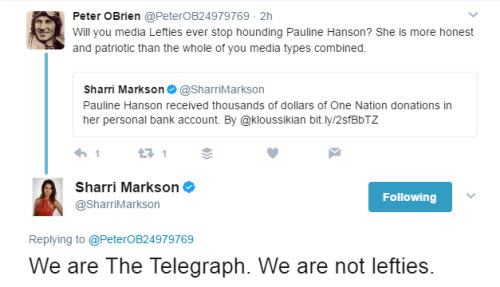 It resonated with us so much as a definition of the paper, we thought we’d help out management (we are very helpful). It’s so smooth, you don’t even notice anything has changed: 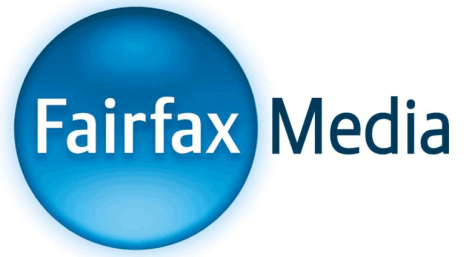 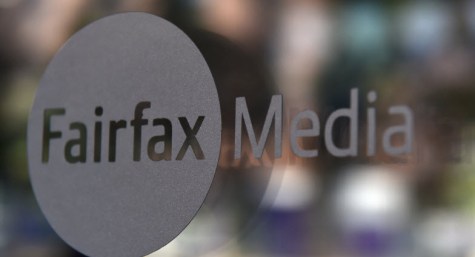 Fairfax’s decline and the fallacy of ‘doing more with less’

I say! So Malcolm’s for the Blues – presumably that’s the Dark Blues, what?

Did anyone really need to be told that the Tele is the face of the far right?

Pity Jethro wasn’t as interested in regulation as he is football. That money-saving, facilitating, self-regulation white-spot and all?

The Terrorgraph may not be leftie but it is certainly sinister.