Is Rupert Mudoch writing the first draft of history? Plus: who needs an internal ethical press standards watchdog when you have Twitter?

Today in Media Files, has Rupert Murdoch taken up a new job as a ghostwriter? And Donald Trump confuses the covfefe out of his Twitter followers.

Rupert Murdoch, staff reporter. Could Rupert Murdoch be back to his old tricks, ghostwriting for his publications? Following up claims published by The Washington Post last week that US President Donald Trump’s adviser and son-in-law Jared Kushner had tried to set up back channel communications with Russia, Fox News published a story without a byline, quoting a “source familiar with the matter” denying that Kushner had done any such thing. While the story notes at the bottom that reporter Catherine Herridge contributed, there has been speculation that Murdoch, proprietor of News Corp, owner of Fox News, himself could have been the author.

It wouldn’t be the first time Murdoch has taken on the role as reporter for one of his publications. He famously penned a report for The Australian that helped bring down Gough Whitlam, under the byline “special correspondent”.

There has also been speculation that rather than being the author himself, Murdoch might be the source of the story. NPR’s media correspondent David Folkenflik tweeted that Herridge had spoken to the source relied on, but had not had time to write the story herself.

Covfefe, we barely knew you. In yet another bewildering moment of the Trump presidency, confusion reigned yesterday after a tweet by the president baffled followers with a new word, “covfefe”. 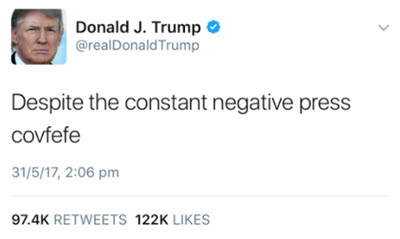 The tweet has now been deleted, but remained online for hours, before Trump followed up with a tease: “Who can figure out the meaning of covfefe?” he wrote. “Enjoy!”.

Improbably, press secretary Sean Spicer told reporters in a briefing, “The president and a small group of people knew what he meant” — to giggles from the press pack.

Whose press freedom? Press freedom is not an indivisible absolute. Those who seek to march under its banner often do so with very different assumptions as to what that principle actually means. The last two days have offered us an instructive example.

Yesterday, the Australian Press Council issued a lengthy media release trumpeting the signing of what they were pleased to describe as “the historic Dili Declaration”. The what? Have we missed some significant international agreement ensuring peace and prosperity in the region?

Hardly. It seems that representatives of the press councils of East Timor, Australia, New Zealand, Indonesia, Myanmar, Thailand and Papua New Guinea have met in Dili and signed some sort of meaningless agreement to encourage “a framework for responsible journalism” in south-east Asia and the Pacific.

Good luck with that, comrades, especially in Indonesia, Myanmar and Thailand.

Quoted in the APC media release, the council’s ever-optimistic chairman, Professor David Weisbrot, tells us that the Dili Declaration “recognises the role that a free press plays in a democratic society”, and expresses his gratitude to the East Timor government for their support. The Prime Minister is specifically thanked for opening the conference.

A more realistic view of press freedom in the region is provided by journalist Peter Greste, writing in today’s Sydney Morning Herald. (Greste has had plenty of time to ponder the principles involved while confined to a Cairo jail cell.) Here’s the nub of his piece:

“On Thursday in Timor-Leste, two journalists, Oki Raymundos and his former boss Vincente Martins, will appear in court to learn the outcome of their long-running trial for ‘slanderous denunciations’ of the Prime Minister Rui Aria de Araujo. It carries a sentence of up to three years in jail.”

There’s no mention of this little embarrassment in the APC press release. Not a word. Perhaps Weisbrot was too busy helping draft the declaration to read the Dili newspapers or talk to any local journalists. For the good Professor and his council, freedom of the press is apparently reserved for those who own and operate the presses, not for those who write or produce the material they publish. — David Salter

BBC staffer killed in Kabul explosion. A BBC driver was one of those killed in the Kabul attack while driving four journalists to work. Mohammed Nazir, 39, was among 90 people killed in the blast. The journalists he was driving were also injured in the attack. BBC Afghan’s editor Waheed Massoud has written about the loss here.

According to the Committee to Protect Journalists, Afghanistan was the fourth deadliest country for journalists in 2016, when it had the most deaths in a year (four) since 2001.

For the record. For all the great headlines Tiger Woods’ DUI arrest attracted yesterday, it turns out he was actually telling the truth about actually being affected by prescription drugs. “Sleepy of the Tiger” doesn’t quite have the same ring to it as “DUI of the Tiger”.

NY Times cuts public editor. The New York Times is making its long-mooted move to slash the number of copy editors, but at the same time it has left a bad taste by using the news to try to cloak the abolition of the paper’s public editor role, with the incumbent leaving the paper on Friday — just days after the announcement.

The paper raised the prospect of cutting the number of copy editors in its 20/20 strategy report, released earlier this year. As part of this the paper will cut an unknown number of editors roles, and invest the “savings” in hiring more reporters — up to 100. But getting rid of the public editor — a sort of ombudsman/in house watchdog — was not mentioned in the report.

The paper’s publisher, Arthur Sulzberger, wrote in a note to staff Wednesday that the job of watchdogging Times journalists “cannot be outsourced to a single intermediary”, and social media and online readers worked as a modern watchdog.

The New York Times Company said in its first quarter report that it expected to take a charge of up to US$23 million related to workforce reductions this year, with about US$17 million to be recorded in the second quarter. — Glenn Dyer

Brutal sacking for news anchor. Some of the sackings in the Australian TV news business have been pretty brutal — Jim Waley from Nine as Sydney newsreader comes to mind for its crassness, Andrew Voss as an NRL caller and sports reporter from Wide World of Sports was also notable for its lack of empathy. But can anything match what has just occurred in the US? Scott Pelley, the anchor of the CBS nightly news (Monday to Friday), was flicked on Tuesday from the post and will now be a permanent co-host of 60 Minutes.

What made it particularly brutal was the fact that Pelley was on assignment for 60 Minutes at the time, so he was not in New York to be boned. Pelley replaced Katie Couric as the host of CBS evening news in 2011. He has co-hosted 60 Minutes since 2003. Pelley’s office was cleaned out on Tuesday while he was away, at his request.

Pelley was conspicuous by his absence from the CBS advertising and programming upfront presentation in New York two weeks ago, which instead focused on CBS’ This Morning show, hosted by Charlie Rose, Gayle King and Norah O’Donnell.

Perhaps Pelley is being blamed for the fact that CBS evening news has been running third among network evening newscasts in both total viewers and the 25-to-54 news demo, behind NBC Nightly News with Lester Holt and ABC’s World News Tonight with David Muir. A replacement for Pelley has not been announced. — Glenn Dyer

Glenn Dyer’s TV Ratings. Nine won the metros and regions last night, as it always does when State of Origin is about. But the network will find it hard to fight off Seven for the week with three AFL games in a row until Saturday, which outrate the NRL games. Nine leads the week 31.4% to 28.3% in total people and 24.4% to 20.6% in the main channels, but by the end of prime time on Saturday night, it will be a close run thing. The first game of the 2017 Origin series was top rate, and as far as viewers were concerned, it deserved more.

Nine will be happy with the 3.52 million national audience, but that was sharply lower than the 3.8 million who watched game one of last year’s series. In fact the audience for last night was the lowest for game one since 2011 and the lowest for any game since game three of the 2015 series. 2.34 million watched in the metros according to the preliminary figures from Oztam, down 10% from game one last year. The regional audience dipped slightly to 1.17 million from 1.20 million. With Game two in Sydney in three weeks and NSW ahead the audience should rise, especially in Sydney. Will Queenslanders return in the same numbers? It was a weak performance last night.

Elsewhere, nothing else mattered. MasterChef soldiered on manfully for Ten with 963,000 (down from 1.1 million for the same night in 2016) and House Rules was split with Sydney and Brisbane and the NSW and Queensland regionals getting the episode tonight that aired in AFL markets on Seven’s main channel last night. — Read the rest on the Crikey website

They’ve only had one really good Public Editor, Margaret Sullivan. The current incumbent, Liz Spayd, has been a disaster, pushing false balance and falling for Fox News hoaxes. Cost cutting may have been a partial motive, but the main problem is that the position hasn’t worked as it should have.

Pot/Kettle, cloak the abolition of the paper’s pubic editor role, et tu Crikey?
The Grauniad is still world champion for typos. but, coming up on the rails…, even if it was corrected for the Comment section above.