How much are we spending on infrastructure? ... where's Albo? ... an evening of cultural cringe ...

Greens Senator Peter Whish-Wilson got curious and decided to use estimates this week to find out what exactly that $75 billion was made up of. Alas, not everything is as it seems. The $75 billion figure in fact is all previous, current and forecast spending from September 2013 on, as totted up by Treasury. Actual new infrastructure funding in the budget is a decidedly less impressive $12.1 billion over forward estimates — and the bulk of that is being wasted on the Train To Nowhere. Still, it’s hardly the first time a government has chucked everything including the kitchen sink into an effort to inflate its infrastructure spending. 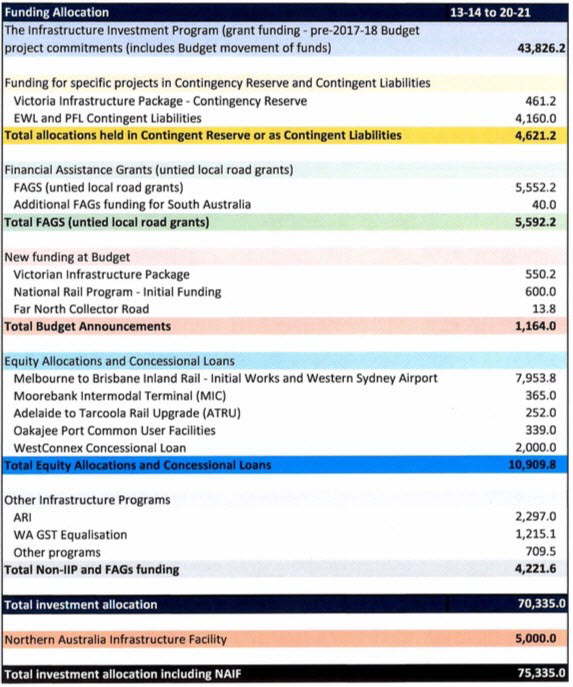 Dual/duel press conferences. In sitting weeks, it is sometimes hard to keep track of all the press conferences going on at once. Camera crews had set up in the mural hall in Parliament House for Energy Minister Josh Frydenberg to announce that the Clean Energy Finance Corporation could invest in coal. But Greens leader Richard Di Natale got there first and thought the camera crew was there for him. Frydenberg arrived confused, and waited patiently, but Di Natale continued for some time. Eventually Frydenberg gave up waiting and wandered off to have a press conference without the cameras, and journalists scurried to catch up. Di Natale’s presser ended and both Di Natale and Adam Bandt watched on as the Environment Minister announced a policy that would surely thrill the Greens.

Barnaby Joyce’s Albo theory. In the joint party room briefing and then in question time on Tuesday, Deputy Prime Minister Barnaby Joyce floated his conspiracy theory that Labor leadership aspirant Anthony Albanese had been prevented from asking questions in question time because Bill Shorten wasn’t letting him. Several Labor MPs pointed out on Twitter that Joyce must have missed question time yesterday. Ms Tips checked the Hansard, and there was no question from Albo. The last time Albo got a question was on budget day on May 9, eight sitting days ago. He has made statements but not asked questions — maybe the deputy PM is onto something.

Oh, that privacy statement. Of the many criticisms levelled at Centrelink’s robo-debt scheme, the Office of the Australian Information Commissioner announced there would be changes to the privacy code and an audit into how the Department of Human Services uses Australian Tax Office data. In evidence to the Senate committee investigating the debacle, Information Commissioner Timothy Pilgrim said government departments could face fines up to $1.8 million if they failed to publish privacy impact statements about data matching under new guidelines. By the looks of it, the Department of Human Services has taken note, with mention of data matching and the Privacy Act appearing on its website yesterday, as pointed out by Ben Eltham:

It goes on to say:

But the page was only updated yesterday:

A new cultural cringe. The Guardian‘s Steph Harmon wrote yesterday that the (mostly white) Australian literary scene has a few questions to consider after a “tense” Sydney Writers Festival event in which RN’s Michael Cathcart spoke with African-American writer Paul Beatty. In a thoughtful piece, Harmon looks at the questions Cathcart asked about race, one of which Beatty says he has only been asked twice — both times in Australia. A tipster tells us that Beatty also appeared at the Wheeler Centre in Melbourne on Monday night at an event titled “Nation, Clan, Self” in conversation with Susan Faludi and Ivan Coyote, hosted by Australian author Jane Caro, which left our source “gobsmacked” after Caro mistakenly offered a welcome to country instead of an acknowledgement of country.

“She didn’t seem comfortable with the topics, the themes or the writers (although more cosy with Faludi and Coyote than with Beatty). At one stage in the conversation about bodies she said (in a conversation about racialised and trans bodies) that she too had to deal with these kinds of processes because she was short-statured … It was excruciating.”

While Cathcart told Harmon: “The tension was inevitably going to be in the room because this is a book that creates a tense and unsettling conversation … It is not a comfortable book.”

We wonder what Beatty will say about his experiences in Australia.

In review of a book by John McWhorter ( “Talking Back, Talking Black”) in a recent New Yorker (The Case for Black English) NY May 15), Vinson quotes McWhorter:
‘The most energetic but also the most frustrating section of “Talking Back” is a short treatise on the word “nigga.” McWhorter takes the customary care in distinguishing the word from its uglier, older cousin, “nigger,” but he pushes the distinction further than most: for McWhorter, these are not simply two separate English words, let alone two pronunciations of the same word; they are, rather, words that belong to two different dialects. “Nigger is Standard English and nigga is Black English,” he writes, matter-of-factly. “Nigga means ‘You’re one of us.’ Nigger doesn’t.”’
It is of course, a word in either spelling that no white person should use. But if Cathcart was discussing Beatty’s use of the word (I only heard a part of the discussion on RN) should he not have the right to use the word?
I’d take you back to the controversy after Tarantino’s film ‘Django Unchained’ was released, full of the N-word as your writer so coyly quotes it. How could I not use it, Tarantino asked, in a film about slavery?
How indeed?

The etymology is clearly French/Spanish via Latin, apart from the redneck usage of nigra but I wonder how much longer the two countries in west Africa will continue to use their colonial name, Niger (Francophone) & Nigeria (Anglophone).
It’s only 20 years since that entire region ceased being shown on maps as the Slave Coast.
Not to mention, Cote de Ivorie – corsets, piano keys & CITES notwithstanding.

‘…Caro mistakenly offered a welcome to country instead of an acknowledgement of country.’

As in, she just said the words wrong? Or she literally welcomed everyone to her own country?

How long is BK going to hammer his ‘Train to Nowhere‘?
Has he spent too long around the Abbottrocity and can now only make a point with a 3 word slogan?
We get it, he doesn’t approve but surely he is employed as a reporter, as in ”just the facts, ma’am”?