Politicians argue over refugee link to terrorism, Turnbull to defend budget, and One Nation holds the government to ransom over the ABC. It's the news you need to know, by Sally Whyte and Max Chalmers.

The stoush between ASIO boss Duncan Lewis and Senator Pauline Hanson in Senate estimates last week, when Lewis maintained there was no link between refugees and terrorism in Australia, has resulted in a war of words between senior members of the government, with Attorney-General George Brandis defending Lewis on the front page of The Australian this morning.

“Mr Lewis was asked about Middle Eastern refugees coming to Australia and bringing in the threat of terrorism,” Brandis said in a statement to the Oz.

“The point he made is that Australia’s refugee program is not the source of the terrorism problem.”

Brandis’ comments come after former PM Tony Abbott also weighed in, saying ASIO “has to command the confidence of the Australian community. Nearly all of the terrorist incidents are associated with people yelling out Allahu Akbar as they kill.”

Lewis will speak for himself on RN Breakfast with Fran Kelly after 7.30 this morning.

MCCAIN: STICK WITH US DESPITE TRUMP

US Senator John McCain has called for Australia to continue its alliance with the United States through the Trump presidency in a speech in Sydney last night. McCain, a prominent Republican and also critic of US President Donald Trump, also said China was “acting like a bully” for building islands in disputed territory in the South China Sea:

“It is not whether Australia or America must choose China at the expense of one another. For either of us to demand that of the other would be deeply unfair and misguided. That is a false choice — the real choice, the real question, is whether Australia and America are better off dealing with China’s strategic and economic challenges together, or by ourselves. I believe the answer is clear.”

One Nation has threatened to block key budget measures unless the government commits to slashing funding for the ABC, with Senator Brian Burston blaming the broadcaster’s “unfair treatment” for the move.

“It’s about time we took a stand against the ABC because if it’s us and they destroy us, what is it next, the government? They’re showing total bias against One Nation,” he said in the report in The Australian, which says One Nation wants $600 million removed from the ABC’s budget over the next four years.

Meanwhile the ABC has more secret recordings to worry the party, including one with party donor Bill McNee saying Pauline Hanson needed to be told some “home truths” about her adviser James Ashby.

Carbon capture and storage signed off for green bank investment

Adani: director on board that will consider $900m loan says project is ‘vital’

Brisbane: The first State of Origin match between Queensland and New South Wales is tonight.

Canberra: Prime Minister Malcolm Turnbull will address the Committee for the Economic Development of Australia (CEDA) State of the Nation conference just before 8am this morning. In a preview of the speech dropped to the Fairfax papers, he will defend the budget and will say: “We have made the tough and pragmatic decisions to put the budget in a stronger position.”

Canberra: Media executives will put on a united front in the nation’s capital, meeting with the PM and Communications Minister Mitch Fifield as part of lobbying efforts to change media regulation in Australia. The Australian reports the bosses of Seven, Nine, Ten, Fairfax and News Corp will also be trying to convince Labor and the Senate crossbench to support reform to media ownership laws.

Canberra: Senate estimates continues and the House of Representatives sits.

Sydney: Founder of the Huffington Post Arianna Huffington will address the World Business Forum on the topic of “new management”.

Alice Springs: The Royal Commission into the Protection and Detention of Children in the Northern Territory will hold a hearing today.

Uluru Statement deserves respect, but treaty would backfire — Paul Kelly (The Australian $): “Let’s get clear what it isn’t — it isn’t a new parliamentary chamber, a rival to the Senate; it has no executive or legislative power; it cannot delay laws and lacks the power to wreck the system.”

We don’t need an Indigenous treaty. We need lots of them. — Nyunggai Warren Mundine (Australian Financial Review $): “No one speaks for Indigenous people as a single group. Even if government offered a treaty and identified someone to sign it, Indigenous people wouldn’t recognise it.”

The ugly side of politics we rarely hear about — Ross Gittins (Sydney Morning Herald): “You and I don’t see the huge extent of contact that occurs between peak industry groups, consultant lobbyists and visiting executives, on one hand, and ministers, parliamentarians and bureaucrats on the other.”

When politicians bully, judges and journalists need to stand firm — Richard Ackland (Guardian Australia): “In Australia, the immigration minister, Peter Dutton, who carries a field marshal’s baton in his knapsack, is on a mission to bring the courts and the media into line.”

Donald Trump’s communications director Mike Dubke has resigned. Seen as an outsider in the administration who lacked loyal followers or patrons, Dubke leaves as part of what some believe will be a broad round of staff changes inside the West Wing. — Axios

Former dictator of Panama Manuel Noriega has died at the age of 83. Noriega rose to power in 1983, initially working as an informant for the CIA and providing a bulwark against leftism in the region for the United States. But the dictator’s brutality, links to drug traffickers, double-crossing, and knowledge of American activities eventually proved too much: President George Bush authorised an invasion of Panama in 1989 to remove him.Noriega spent most of the rest of his life in prisons in the US, France, and Panama respectively. — New York Times

Uluru statement from the heart (Referendum Council): “We seek constitutional reforms to empower our people and take a rightful place in our own country. When we have power over our destiny our children will flourish. They will walk in two worlds and their culture will be a gift to their country.”

Fifty years on from the 1967 referendum, it’s time to tell the truth about race (The Conversation): “The constitutional amendments attended to what appeared to be racially discriminatory clauses, which excluded Aboriginal people. The result may well have made Australia appear less racist, but it did not address the inherently racist nature of the constitution.”

Manuel Noriega: feared dictator was the man who knew too much (The Guardian): “As CIA director and two-term vice-president to Ronald Reagan prior to 1988, Bush was implicated, by association, in often illegal, covert interventions in the civil wars in El Salvador and Nicaragua. During this period, Noriega, who rose to head the Panamanian security forces, became a highly paid informant and CIA “asset”.”

Millennials are less keen than previous generations on illicit drugs (Economist): “As the leading street drugs have become less popular, prescription painkillers have filled the void: over the past decade opioid abuse has soared.” 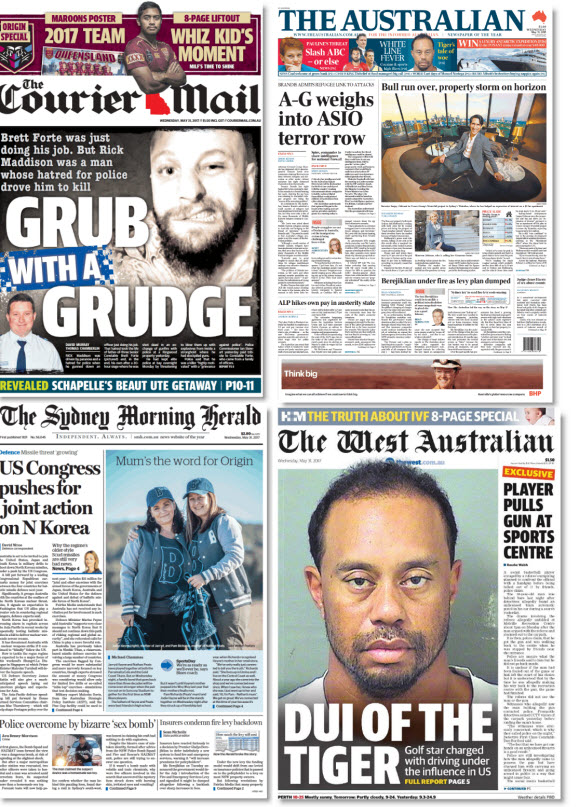