All’s Fairfax in love and bidding war. The battle for control of the Fairfax media empire is hotting up, as the two current suitors — TPG, and Hellman and Friedman, both US private equity players — begin due diligence. But there is another party with a seat at this table, of course: Fairfax itself, which is salivating at the prospect of drumming up a hot auction between the two American bidders. The current task of the Fairfax board and executives — many of whom will benefit financially from a sale — is to talk up the value of their company and have the bidders’ tongues hanging out. Which isn’t all that hard if you own the country’s premier financial newspaper, the Financial Review, and can use it to spruik the genius of the company in building its Domain property business, which is the core of Fairfax’s value and the only reason for interest in buying the whole company.
Although the word “genius” wasn’t mentioned in this big story in today’s Fin — former Facebook exec Stephen Scheeler says boards are missing mobile revolution — that was the underlying message to bidders:

“Over the past two years, total mobile visits to Domain were up 133 per cent, total app visits were up 107 per cent and app downloads grew 60 per cent. Domain now reaches 4.1 million Australians via digital, 2 million by print and 1.2 million through social media, including Facebook, Twitter and Instagram. These statistics will deserve closer analysis by Hellman & Friedman and its rival Fairfax bidder TPG, because the 1.2 million social media connections to Domain are not captured by the Nielsen ratings system. Over the past few years Domain has gone from a challenger brand in real estate listings to a position to challenge REA Group in the mobile space. It is neck and neck with REA in terms of mobile engagement.”

As Fairfax says in its corporate branding, “independent always”.

Work for the Dole changes won’t help safety. The government’s Work for the Dole program has long been criticised for being unsafe and for not helping anyone find a job. There is “considerable evidence” it doesn’t work. Indeed, it was thought the program was headed for the chopping block in the lead-up to the budget this year. And while roughly $150 million has been cut from the program, still it stands. But don’t expect these changes to improve the outcomes for job seekers — the Department of Employment certainly doesn’t.

At Senate estimates yesterday, representatives from the Department of Employment were asked about changes made in the budget, described by the department as a “refocus” of the program. This refocus involved doing away with Work for the Dole co-ordinators and shifting the emphasis from group placements to individual placements. Asked by committee chair Gavin Marshall whether the changes would improve the number of job seekers who found a job after the program, department secretary Renae Leon replied: “I don’t know that these changes were intended to improve the outcomes, so much as simplify the process.” Work for the Dole employers felt the co-ordinators added a “level of complexity”. Ms Tips suspects that if the government had spent more time talking to the people who actually work on these sites, it might not continue with the program at all.

Just (budget) Cuts. Treasurer Scott Morrison has had a lot on his plate lately warding off attacks from Labor, the banks and the Catholic schools about various measures in this month’s federal budget. Why not let the guy kick back and chat about motor sports with a staple of Australian light entertainment  at a hair care outlet factory? Family Feud host and Just Cuts brand ambassador Grant Denyer tweeted a picture with Morrison yesterday, captioned “Hangin’ w Treasurer @ScottMorrisonMP opening new Just Cuts factory. He had 1978 Bathurst race video on his phone”. See, you can tell it’s totally chill, because Denyer dropped the g at the end of hanging. 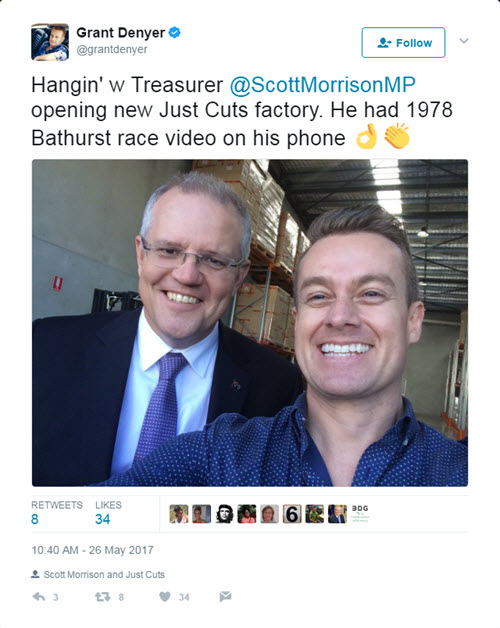 And while we digested the fact that our Treasurer carries around footage of a 40-year-old race in his pocket, Just Cuts tweeted another image of the two, captioned: “It turns out AUS Treasurer @ScottMorrisonMP & our Brand Ambassador @grantdenyer share a love of all things motor sport! Those smiles though.” And we have to admit, it’s the happiest we’ve seen ScoMo in some time. 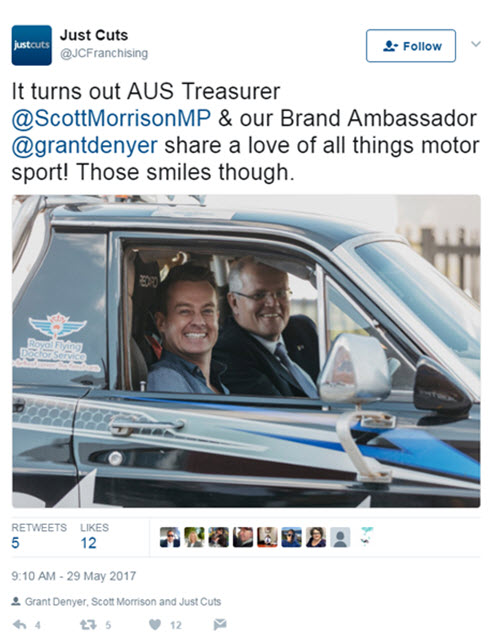 George Christensen’s delayed response. Free speech champion (except when he’s not) and medical tourist George Christensen has broken ranks with his Coalition colleagues once again, this time over penalty rates. The truculent Queenslander took a mere three months to leap into action following the Fair Work Commission’s decision to cut penalty rates for Sunday and public holiday work for people in hospitality, restaurants, fast food and retail industries. In announcing his intention to introduce a private member’s bill overruling the Fair Work decision, Christensen certainly hasn’t aligned himself with Labor on the topic, making sure to add a slam against the ALP and union movement  — “I am introducing my own private members bill that will protect workers’ take home pay by protecting Sunday penalty rates from both the Fair Work Commission decision but also union approved cuts”. So why this not-so-sudden change of heart? It couldn’t have anything to do with the fact that it looks set to harm workers in his seat, one of the most likely to be poached by Pauline Hansons’s One Nation, and he wants to eliminate a point of difference between himself and PHON after they flip-flopped their way from support to condemnation of the policy? It couldn’t be that, surely?

Yet another scare. Like an even worse sequel to a rotten but inexplicably successful film, it now appears that the moment anyone, anywhere, who can even remotely be connected with the government, engages in any kind of discussion about health, Labor will launch into another iteration of Mediscare. Yesterday in question time, Labor repeatedly asked about a report of a “secret taskforce” purportedly looking at pooling hospitals funding, the private health insurance rebate and payments to doctors into one funding source for the Commonwealth’s hospitals funding contribution. As Crikey noted yesterday, there’s nothing secret about this since the idea was publicly mentioned in 2015, it wouldn’t involve cuts to the quantum of Commonwealth funding, and it wasn’t endorsed by the government. Indeed, the government yesterday was at pains to dissociate itself from what it accurately noted was an idea more in tune with Labor’s opposition to the private health insurance rebate. But Labor’s health spokeswoman Catherine King seemed more interested in getting the phrase “secret Medicare taskforce” into Hansard, eschewing any normal linguistic device that might have relieved her of the need to say the phrase over and over. Thus: “The Health Minister said that the government’s latest secret Medicare taskforce ‘long predates me’. Prime Minister, how can your health minister possibly claim his secret Medicare taskforce predates him when he was sworn in as the Minister for Health in January, the secret Medicare taskforce met …” Crikey is happy to do a whip-round and buy King a pronoun if it will help.

Re: ‘Yet another scare’
The author of this piece is probably too young to remember that the only political party to dismantle and remove the first universal healthcare system we had in this country, Medibank which was set up by the Whitlam Labor government in the 1970’s, was the Fraser LIBERAL/NP government less than 10 years later.
All people who value Medicare should be aware that getting rid of it is in the LNP DNA. It requires very, very close supervision of what this, and all LNP governments, are up to on health issues.
So you can attack Catherine King all you like, but she is just carrying on the work that ALL Labor Health Ministers and spokespersons on health have had to do since the Hawke/Keating government reintroduced universal healthcare (Medicare) in the 1980’s. If the Labor party was not ever vigilant, we would have lost it by now.
Don’t listen to what the LNP say…look at the history. Have a long think about that!