Good morning, early birds. The government is considering radical changes to the health system, Schapelle Corby has returned to Australia, and a class action brought by detainees on Manus Island will begin this week. It's the news you need to know, by Cassidy Knowlton and Max Chalmers.

OUT OF OUR SYSTEM?

The government is considering scrapping the private health insurance rebate and requiring the states to come up with more funding for public hospitals, according to an article by Adam Gartrell in the Fairfax papers. A Health Department presentation obtained by Fairfax says the Commonwealth is considering “pooling” the “$20 billion it currently gives to public hospitals each year with the $3 billion it pays to private sector doctors and the $6 billion it spends on the rebate to help people pay their private health insurance”. The government would then pay a standard amount per health service, regardless of whether the service is performed in a public or private hospital. Doctors and specialists in private hospitals would likely be paid less, and a 2015 discussion paper on the proposal describes it as “the public hospital equivalent of bulk-billing in general practice”. A government spokesman was quick to throw cold water on the story, telling Sky News’ Kieran Gilbert the proposal was not government policy.

Australia’s most famous drug smuggler has returned to the country 13 years after she brought 4.1kg of marijuana into Bali in her boogie board bag. Schapelle Corby left Bali Saturday night, but a last-minute airline change and a fleet of decoy cars outfoxed the waiting media. People wearing masks, believed to be Corby’s friends, turned up at her mother’s Loganlea home on Sunday. It is believed Corby is in hiding in a Brisbane hotel, but she is not entirely shunning the limelight — hours before she left Bali Corby launched a new Instagram account, posting the first picture to the account of the two dogs she was leaving behind in Indonesia. 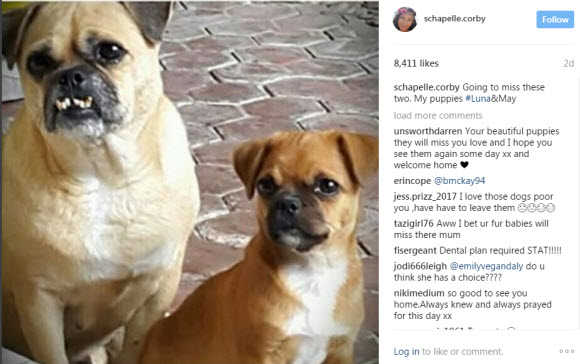 “The government’s proposed changes to the banking sector should be abandoned. The changes are illiberal, amount to the quasi-nationalisation of the major banks, and will permanently reduce economic growth.” That’s a briefing note prepared by the Institute of Public Affairs and sent to all MPs. Almost two-thirds of Australians supported a “super profits tax” when The Australia Institute commissioned polling on the matter last year, but will the IPA’s argument carry more weight with conservative MPs?

Despite widespread support for a bank levy and Gonski school funding the Prime Minister has failed to secure a post-budget bounce in the polls. The latest Newspoll has Labor leading the Coalition 53-47 on a two-party preferred basis. Malcolm Turnbull is doing a bit better, with a net satisfaction of -19, up from -20 two weeks ago. But Opposition Leader Bill Shorten‘s numbers are also going up; his net satisfaction rating is -20, up from -22 two weeks ago, and well up on the -30 he achieved at the end of February. As William Bowe wrote in Crikey two weeks ago, voters are not usually swayed by the federal budget.

Meanwhile, the Australian Bankers Association has asked PR agencies including WPP and Red Head to pitch a public relations campaign to turn the tide of public opinion against the $6.3 billion bank levy (much of which is a tax write-off, as Crikey told you last week), according to Adele Ferguson in The Australian Financial Review.

Canberra: Senate estimates continues this week, with  Health, Treasury, Employment and Defence mandarins in the hot seat. Will anyone ask Health bureaucrats about the possibility of scrapping the private health insurance rebate (outlined above)?

Also in the nation’s capital, Senator John McCain, one of the few Republican congresspeople to publicly challenge Donald Trump, will visit the Australian-American memorial in Canberra. McCain has spoken to The Australian‘s Cameron Stewart about his hopes for his Australian visit and his time as a prisoner of war in Vietnam.

Sydney, Brisbane: NSW skipper Boyd Cornder will talk to the media in Sydney and Queensland captain Cameron Smith will hold a media conference in Brisbane ahead of Wednesday night’s State of Origin clash.

Alice Springs: Hearings for the Royal Commission into the Protection and Detention of Children in the Northern Territory will be held in Alice Springs today.

Melbourne: A class action lawsuit brought by 1905 current and former detainees at the Manus Island detention centre will begin this week, with a Supreme Court judge to decide whether to grant an application to commence proceedings on Wednesday or kick things off today. Slater & Gordon are representing the current and former detainees, who are seeking compensation for alleged physical and psychological injuries they say they suffered on Manus Island. Fifty detainees are expected to give testimony.

Uluru statement offers up different set of priorities — George Williams (The Age): “Any treaties that Aboriginal people enter into with state and territory governments are vulnerable to being disrupted by the Federal Parliament using the races power. Australia’s current constitutional arrangements do not provide a secure basis upon which to negotiate and enter into such agreements.”

Harold Holt’s death and why the 1967 referendum failed Indigenous people — Gary Foley (Guardian Australia): “In a bizarre twist of history, John Gorton has in the long term been perceived as a sympathiser of Aboriginal issues purely on the basis that he attended an Aboriginal debutante ball at the Sydney Town Hall in 1968. The widespread positive publicity Gorton attracted from that single event has obscured his basic hostility and indifference to Aboriginal issues whilst he was prime minister.”

German Chancellor Angela Merkel has said that Europeans must “take our fate into our own hands” after the conclusion of a testy G7 meeting, attended by the leaders of the world’s largest economic powers, including the US. President Donald Trump did sign on to an anti-protectionism pledge, but he declined to endorse an emissions pact, and continued to denounce NATO members for not paying their share during his trip to Europe. — Reuters

A man who attended alt-right protests and posted neo-Nazi material on his Facebook page has been charged with double murder and hate crimes after allegedly slaying two men on a train in Portland, Oregon. Jeremy Joseph Christian was reportedly taunting two Muslim women on the train before others interjected, leading him to attack them with a knife, killing two and injuring one. — The Guardian

Close to half a million people have been impacted by severe flooding in Sri Lanka, with 151 confirmed dead. Water levels are now receding and the navy has been deployed to help rescue survivors. — New York Times

Ruben Ostlund’s film The Square has taken out this year’s Palme d’Or, the top prize of the Cannes film festival. See all winners here.

Why Donald Trump’s ‘mini-surge’ in Afghanistan invites scepticism (The Australian $): “The harsh reality is that, in Tunnell’s terms, we repeatedly have won the counter-guerilla fight in Afghanistan, only to fail at the broader counter-insurgency effort. Time and again — in 2001-03, in 2006, and in 2011-12 — Western-led forces defeated the Taliban on the battlefield. But, time and again, governments failed to translate battlefield success into enduring stability.”

This is the worst Tory election campaign ever (The Spectator): “The most salient comment of this election may have been made on the day it was called, by Brenda of Bristol: ‘Oh no, what’s she done that for?’ People suspect that their lives are being disrupted for Theresa May’s political and personal gain. And they’re not wrong, are they?”

Emmanuel Macron says bone-crushing Donald Trump handshake was ‘not innocent’ (Newsweek): “In an interview with the Journal du Dimanche Sunday, the French leader said his interaction with the American head of state was “a moment of truth.”” 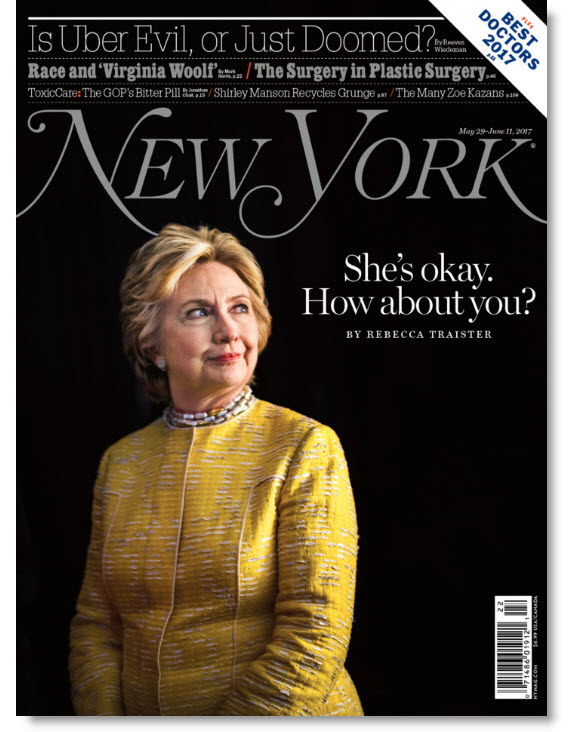 Hilary Clinton is furious. And resigned. And funny. And worried. (New York Magazine): “Almost everywhere Clinton goes, it seems, someone starts crying. It’s not just friends and staffers. And though it was more intense in the weeks immediately following the election, it hasn’t entirely let up. At restaurants, in grocery stores, on planes, and in the woods, there are lines of people wanting selfies, hugs, comfort.” 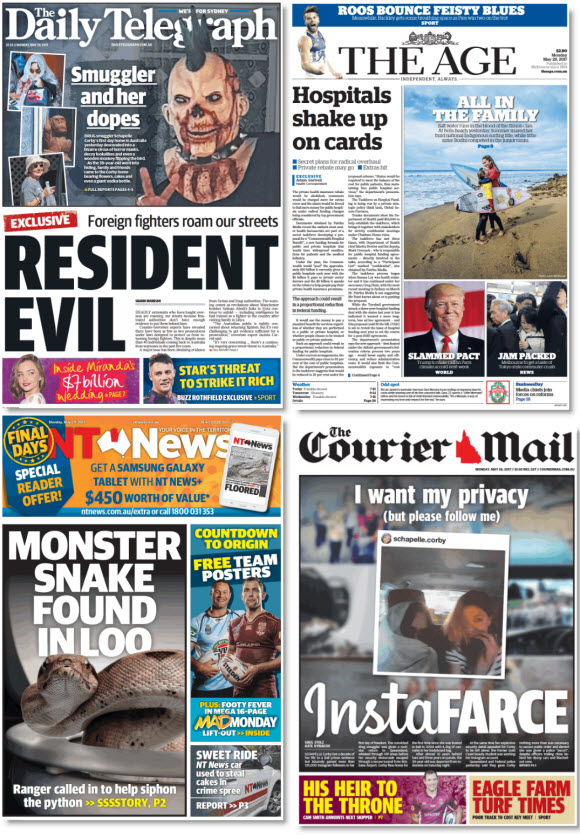