How do you follow the biggest celebrity drug mule in Australia if she won't show her pretty face?

In Media Files today, Schapelle Corby has got the media after her into a tizz over her disappearing act, applications for voluntary redundancy at Fairfax have closed, and the Press Council’s media release whoopsie.

Corby watch. Drug smuggler and media obsession Schapelle Corby came home to Australia over the weekend, deported from Bali. Corby and her team bamboozled the waiting media horde by switching flights at the last minute, leaving journalists behind on the Virgin flight she was expected to take back to Brisbane. The tabloids have been incredibly annoyed at still not having seen Corby since she got home — smuggled out of the airport and possibly holed up at a swanky hotel.

The struggle to cover the huge story when there’s nothing to cover was evident in the newspapers this morning, focusing on Corby’s avoidance and her family’s appearances. But especially irritating to them is Corby’s decision to create an Instagram account to post her own photos of her release (and of the media packs following her). She’d already clocked up 147,000 followers this morning, and The Courier-Mail is not happy about it, headlining its front-page splash this morning “InstaFARCE”. 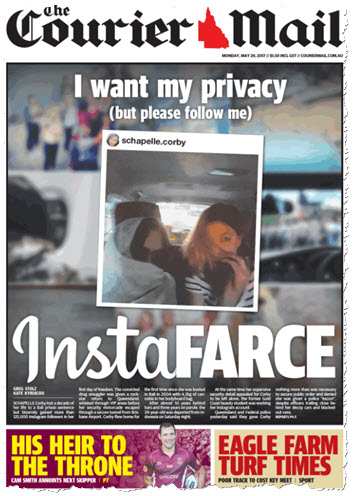 The Daily Telegraph ran a front-page pointer and two full pages inside the paper this morning, poking fun of Corby’s family’s antics in apparent attempts to attract attention: 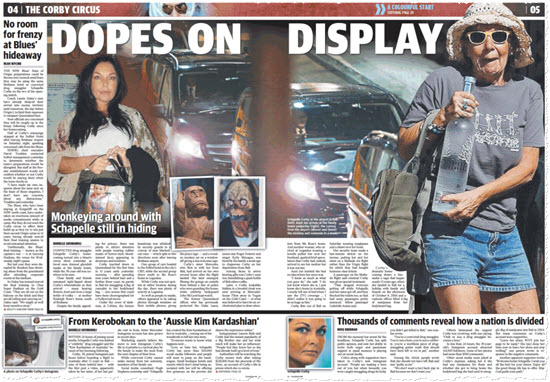 Nine’s Today host Karl Stefanovic was a rare voice of reason on his show this morning, calling out his colleagues for giving Corby way too much attention: 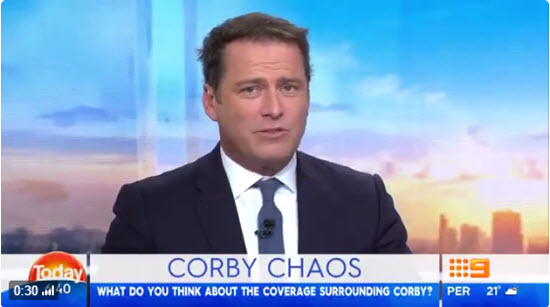 Fairfax voluntary redundancies close. Applications for voluntary redundancy in the Fairfax metropolitan newsrooms closed this morning. Fairfax had a target of cutting 125 jobs — 10 of those have already gone. Once the applications are in, management will assess them to decide if they’ll be accepted or knocked back.

Crikey understands Fairfax video staff were told the team would be reduced to just three journalists nationally, with some more staff kept on for processing video from the syndication deals. Fairfax told Crikey last week that figure was wrong.

Do you know who’s leaving? Let us know.

Press Council’s clanger. If virtue is its own reward (as John Henry Newman would have us believe, perhaps paraphrasing Epictetus), then hubris is probably its own punishment. Nothing hurts quite as much for a newspaper as having to correct the basis of a prominent story that turned out to be false. So we should all feel the pain at the Australian Press Council, which has just had to retreat from a whopper.

On Thursday our noble guardians of press standards kicked off a widely distributed media release with this lead par of characteristic self-praise:

“The Australian Press Council’s appointment of Carla McGrath, the first Aboriginal or Torres Strait Islander person to join the Council, is another indication of its strong commitment to increase diversity and broaden expertise in the Council’s ranks.”

Well, the council’s expertise could certainly do with some broadening, because the next day they had to re-publish the release, with a new introduction:

“In a media release issued by the Press Council on 25 May 2017, headed ‘Australian Press Council appoints its first-ever Indigenous member’, it was stated that Carla McGrath was the first Aboriginal and Torres Strait Islander person to assume the position.

This is not correct.

In fact, the Press Council has had at least two Indigenous members in the past:

The Council regrets this error and sincerely apologises to Mr Bourke and Ms McNamara.”

As whoopsies go, that’s a gold medal performance. Not only wrong (on two counts), but offensive and plainly ignorant of the APC’s history. Maybe, before they push out their next chest-beating media release, the council might do well to consider the very first point of their own “Statement of Principles”, namely:

“Accuracy and clarity  1. Ensure that factual material in news reports and elsewhere is accurate and not misleading.”

Ten’s value hits another all-time low. What a difference a month makes. About 30 days ago the Ten Network share price was 44 cents (a new all-time low) and the company was valued at $163 million. Then on April 27 the interim financial results were released confirming an earlier downgrade and the impairment of the value of the company’s TV licences for a $232 million loss, and down went the shares. And they haven’t stopped falling since. Last Friday they closed at another new all-time closing low of 17 cents (1.7 cents before last year’s one-for-10 consolidation).

The shares had dropped to 16 cents during trading on Friday to be down 24% in the week, before rising one cent at the end for a 19% slide. The company’s value has plummeted by more than $100 million in the past month — from $163 million to just over $61 million on Friday. The shares started the year at 93 cents — a fall of 83% to last Friday’s close. It’s a metaphor for dud investment decisions, poor programming, weak management from the board down and the confused thinking of just one man — Lachlan Murdoch.

But it wasn’t just Ten that was hit on Friday, Seven West Media, Kerry Stokes’ 45%-owned TV and magazine business, took a hit on Friday as well. Shares lost 1.4% to close at 70 cents, but hit a low of 68.70 during trading. The shares were up half a cent over the week, in contrast to Ten’s slide.

The other notable loser was Southern Cross, where shares fell from $1.165 to $1.13 on Friday (the lowest for more than a year), after it issued a quasi earnings warning the previous Friday. The shares were trading at $1.29 the day before the warning, so the slide has been 16 cents or 12.4%. The shares are down 25% so far in 2017, joining the rest of the sector in the cellar (except for Fairfax, where the share price has been boosted by takeover activity). — Glenn Dyer

Media summit a farce. Ten’s falling value (and the continuing weakness in the share prices of Seven West Media and Southern Cross Austereo) will be conveniently ignored at a legacy media summit in Canberra on Wednesday, where media will gather to lobby the federal government and the Senate crossbenchers on the need for the media law changes (and the cut in TV and radio licence fees) to be passed as quickly as possible. The meeting will be all talk and nothing else from the likes of Foxtel (half owned by News Corp), Ten (21% controlled by Foxtel and Lachlan Murdoch), Fairfax Media, Seven and Nine.

The summit on Wednesday is a farce — it is a way the media industry has thought up of legitimising the grubby descent of of media company lobbyists, executives and rent-seekers on the national capital to push for the Turnbull government’s reforms. Fairfax will of course be lobbying for approval for any deal it might do with either TPG or Hellman and Friedman for a takeover (which would enrich CEO Greg Hywood).

But Ten’s fate will be the stereotypical elephant in the room. Everyone will note the network’s woes, but no one will want to draw attention to it because to do so would invite comments that might mention the other unspoken bogey — the rising grip of News Corp on the Australian media. Already it controls well over 70% of the Australian newspaper market (a situation permitted by the ACCC), it controls the pay TV industry through its half interest of Foxtel, and control over management, plus ownership of Fox Sports (Foxtel’s major content supplier, but heading for a big write-down later this year), control of Ten through the combined 22% stake of Foxtel and Lachlan Murdoch, and control over Ten’s content through Fox and half ownership of Shine Endemol, plus control over Ten’s ad sales. On top of that there’s Lachlan Murdoch’s control of the Nova radio network, and News’ 14.9% stake in APN, which owns two national radio networks.

Ten’s sliding share price tells us that not even the prospect of a “mates’ deal” in Canberra to allow News to grab control of Ten can save the network from the dud management and the gathering grip of News. Friday’s early slide drew a please explain query from the ASX, but directors replied that had no idea except that that Lazard Asset Management and its associates have been selling out — Lazard is no longer a substantial shareholder. But that was notified on May 10, revealed when the shares were at 25 cents. They have fallen a third since that date.

Far from a gang of powerful billionaires and oligarchs flying into Canberra for some rent-seeking, the media managers will be limping, doing the bidding of absentee owners or billionaires — in the shape of the Murdoch clan and Kerry Stokes. Nine will have Peter Costello, its chair, floating around. The others will be there to make up the numbers. The lobbying is all about what the Murdochs and Stokes want. As always, follow the money. — Glenn Dyer

Glenn Dyer’s TV Ratings. A close night between Nine and Seven in the metros. Nine claimed the demos, Seven claimed total people and a very arrow win in the main channels. But the big story was another very solid night for House Rules — its best so far with 1.97 million viewers nationally. It was an OK night for The Voice with 1.55 million, while Masterchef Australia was squeezed out and failed to crack the million viewer mark nationally, ending up with 965,000. More than 4.3 million on average watched these three programs last night — again underlining why the commercial networks still believe in these programs.

House Rules was second in the metros with 1.18 million, which is OK these days, but it is getting real traction in the regions after a moderate start — it soared last night, reaching 785,000 viewers. In the morning chats, Insiders was again tops with 527,000 national viewers on the main channel and ABC News. Seven’s Weekend Sunrise also cracked the half a million mark with 407,000 while the ABC’s unassuming Landline managed a solid 410,000. — Read the rest on the Crikey website

“Corby and the Press”? …… Ever watched one of those wild-life documentaries where the vultures, jackals and hyenas are fighting to “clean up” a carcase?

The Corby clan bamboozles the media, what a hoot! Fun for all.

Hell hath no viciousness & vitriol like a media deprived of their self righteousness.

Someone choosing to control how they are exposed to the public under that circumstance doesn’t seem that unreasonable to me. Tabloid journalists do not have an automatic right to access her, but she does have a right to use Instagram or Twitter in such a way….

I used to wonder what “escaping the rat race” would be like – the “scoop” is the cheese?
Corby’s done her time – and probably someone else’s – now she has to undergo “Ordeal by Media”?