Numerous wealthy families were excluded from the list altogether.

What sort of Australian rich list doesn’t include billionaire families such as the Smorgons, the Myers, the Libermans and the Wilsons? Sadly, it is the Fairfax Rich List, which was published last Friday.

Back in the day, BRW used to produce two Rich Lists, one for individuals and another for families.

If you look at the 2010 edition, there were 200 individual entries and an additional 57 families.

Budget cuts meant families were removed by the time 2013 came around, but the absurdity of the situation is highlighted by the way some families have multiple individual entries, but others don’t get a mention at all.

The late Dick Pratt had three kids, and all three of them get a mention, albeit both daughters are only covered in passing because it is their husbands who apparently control the wealth. That’s perhaps one for the feminists to debate.

Fairfax tells its readers that the Pratt family are collectively worth $15.28 billion, as follows:

How must the three Wilson brothers — Alan, John and Bruce — feel about this? Their family bought into plumbing supplies business Reece in 1969, and today their 70% stake is worth almost $3 billion.

In terms of wealth, they are a top 10 family in Australia, but the Fairfax Rich List doesn’t mention them, either individually or as a family, which is just how the media-shy Wilsons would like it.

[Mayne’s take: The top 25 Australian billionaires, as claimed by Fairfax]

Contrast that with Anthony Pratt, who paid for Fairfax journalist John Stensholt to visit his American operations. Pratt was crowned as Australia’s richest person, while both his brothers-in-law also got a spot.

Fairfax can’t have it both ways. Numerous wealthy families are excluded altogether, but 29 of the entries have “and family” included after their name. Like the Pratts, here is a list of other families that have been granted multiple individual entries in the Rich 200:

Rinehart family: Gina is valued at $10.41 billion whilst estranged daughter Bianca comes in at $2.74 billion, but the three other children are nowhere to be seen. It would be simpler to just value the whole family.

Roberts family: the Multiplex founder John Roberts died a few years back, but it was as if the billionaire family had no wealth in the 2016 Rich List. This year, both of John’s sons appear for the first time with individual entries, with Andrew Roberts valued at $819 million and his younger brother Tim Roberts debuting on $986 million, for a total of $1.8 billion.

Besen family: The 93-year-old patriarch Marc Besen is valued at $2.24 billion, and his daughter Naomi Milgrom comes in separately at $585 million, but there is no mention of her three siblings, Carol Schwartz, Daniel Besen and Deborah Dadon, who are all clearly worth plenty. Why not just value the whole family at more than $3 billion?

Fairfax family: The 94-year-old Mary Fairfax is valued at $597 million, but there are hundreds of millions floating around among the other strands, so why not just put the family on the list at more than $1 billion?

Neilson family: Platinum Asset Management founder and majority shareholder Kerr Neilson comes in at $1.44 billion, only marginally ahead of his former wife Judith Neilson on $1.34 billion for a total of $2.78 billion.

Grollo family: is Fairfax trying to reduce the amount of work on the list? Bruno Grollo gets his own mention at $720 million but then his brother Rino and wife Diana are given two separate spots for their $493 million pile. Why not just “Grollo family: $1.213 billion”?

Strangely, there are a number of other married couples who each occupy two spots on the top 200: Bill and Imelda Roche, Ervin and Charlotte Vidor, Tony and Christina Quinn, Jina Chen and Alex Wu, Jamuna Gurung and Shesh Ghale, and David and Vicky Teoh. Even divorcees such as Max Moar and Iris Lustig Moar are listed and valued together at $650 million, but they take up two spots, 91 and 92. Throw in a similar treatment for brothers such as John and Robert Kirby, Andrew and Michael Buxton, and Morry and Zac Fraid and you have a Rich 200 that actually only covers 182 families.

This is dramatically less than the circa 240 different families covered in the 2010 Rich List. Readers are being short-changed here. 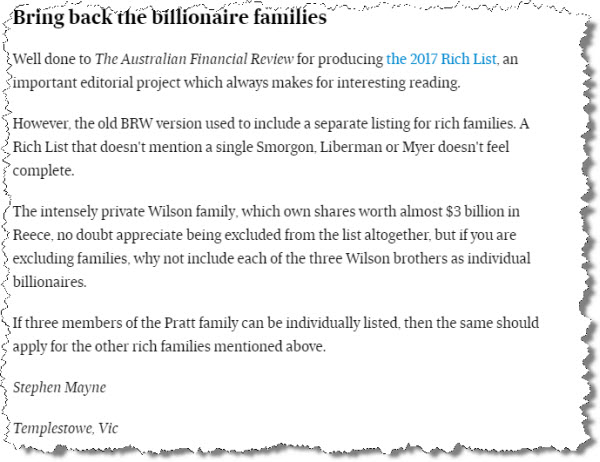 At least the AFR was good enough to publish this letter in today’s paper (above) calling for a return of the rich families, which is an encouraging sign for next year.

BRW’s Executive Rich List a wobbly extension of the franchise