Cricket Australia’s further troubles. Cricket Australia and the players’ union, the Australian Cricketers’ Association, are heading for a stoush — one that is very public, with a cut-off date of June 30 for a new pay deal. In the midst of the dispute, the players have formed a company that will control their intellectual property and images. Here’s a question for Cricket Australia and their union-bashing chairman David Peever (a former CEO of Rio Tinto Australia): can Cricket Australia, the Nine Network and their advertising and market consultants and agencies continue to use the images of Test team stars such as Steve Smith, David Warner and Mitchell Starc after June 30, to sell next summer’s much-anticipated Ashes Test series against England? If there is no agreement by June 30, can the players and their new company assert control of their images and intellectual property? And if they can, can they then assign the right to use those images after June 30 to Cricket Australia, Nine and their marketing and advertising consultants for a fee (presumably a very large fee)? If they can control their images and they don’t wish to assign them in any way, do Cricket Australia and Nine have a marketing campaign, or will Cricket Australia and Nine have to pull the ads now being broadcast? One for the sports lawyers perhaps?

United Australia Party’s busy leadership Last week Crikey brought you the travails of the United Australia Party, the conservative micro-party looking to Cory Bernardi’s Australian Conservatives to maintain their viability and increase their clout. Certainly, a glance at their various online spaces shows they could use some of the bigger party’s infrastructure and some more members. According to the organisation structure page (currently down), new president Ron Pike shares CEO duties with secretary Stuart Donald. Pike is a busy man — he’s also the New South Wales state executive president, and he is described on his Facebook page as a “key member of the policy committee”. That definitely checks out; he’s currently the only listed member. The roles of treasurer and vice-president are both vacant at national level, and neither the Victorian nor NSW branches has a secretary. 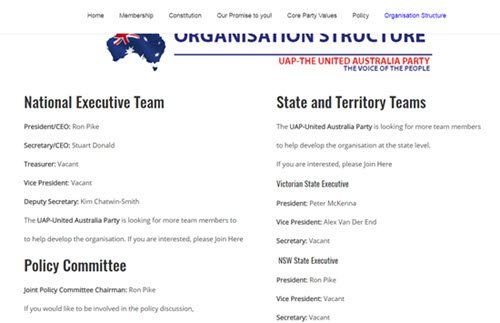 Further, Pike’s email address is that of an Australian Liberty Alliance member (Pike is a former ALA candidate — incidentally, the party recently announced they wouldn’t be merging with Bernardi) and his website is still listed as unitedconservatives.com.au, which leads to a blank page. The UAP website (theuap.com.au) is also currently down. If the many governance issues prove too difficult to fix, maybe the party’s online presence would be a good place to start. 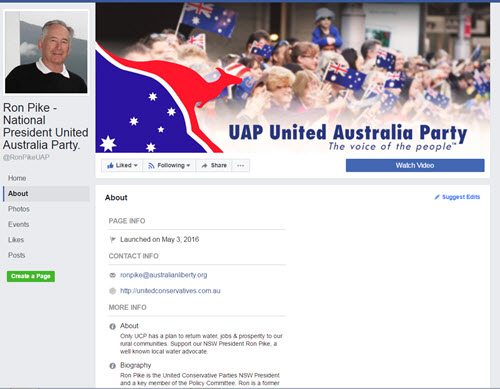 Same old story. Intrigued by the “radical funding changes” for healthcare being considered by “top government officials” and a “secret taskforce” unveiled by the Fairfax press today? Under the “radical funding changes”, the government would pool its existing hospital funding, the cost of the private health rebate and its payments to private system doctors into a single 35% contribution to all hospital costs no matter where they were.

The problem is the “radical changes” are so “secret” that News Corp’s gun health reporter Sue Dunlevy reported something very similar in November 2015. Back then, the proposal was that the Commonwealth would pool its hospital funding, private health insurance rebate and funding for private doctors to cover 40% of the cost of hospital care.

Nor is the current version being pursued by a “secret taskforce” — it’s just a group of bureaucrats and consultants doing what bureaucrats and consultants normally do. On that basis, pretty much the entire public service is a “secret taskforce”. But couching it in such terms, and invoking “top government officials” who may or may not have even participated in discussions, turns ordinary policy development — which includes considering things governments would never do in a million years — into something faintly sinister that the government has to immediately slap down; the Health Minister, the unfortunate Greg Hunt, was forced to do just that this morning. And nary a word linking it to the fact that the same idea has been batted round in public for a long time already — or the work of other journalists.

Ballsing it up. Winston Peters was a big thing in New Zealand politics a few years back: a Maori, a mainstay of the right-wing New Zealand First Party, and possibly a walking argument against the principle of dedicated seats for indigenous groups. He faded somewhat, but he’s back:

Yes, Peters has joined the exclusive club of public figures — including Rupert Murdoch and UK Labourista Ed Balls — to confuse the compose and search fields while obsessively searching his own name. But was it accidental? Chancellor Ed Balls’ tweet of his own name on April 28, 2011, ensured that the day has become Ed Balls day ever since. Since the former chancellor’s strategy appears to be keeping himself in the public eye — by doing a season on Strictly Come Dancing — in order to jump back into the Labour leadership, maybe these are all deliberate. Peters’ effort gets extra points because the phrasing — “Tweets on Winston Peters NZ Politician” — suggests he thinks it will have some harried Twitter executive thumbing through a filing cabinet. Whether it does represent a shrewd attention grab on Peters’ part or an honest mistake, it caught the approving eye of the original — over the weekend, Balls approvingly retweeted Peters’ gaffe. 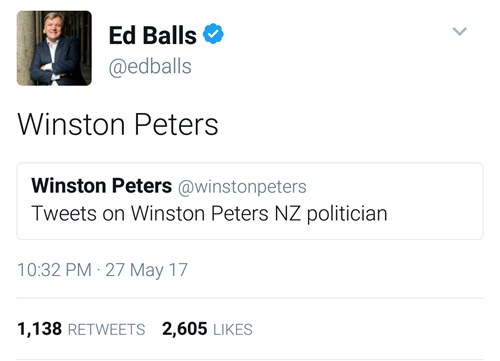 Roberts confused by the facts on ACL ‘bombing’. Last week, a 36-year-old man was charged with one count of arson and one count of property damage for the incident at the Australian Christian Lobby’s headquarters at the end of last year. But that hasn’t stopped the ACL and One Nation Senator Malcolm Roberts from seeing terrorist conspiracy theories everywhere. Roberts asked the AFP in February’s estimates hearings about the incident and asked a set of questions on notice, including:

“Did any witnesses come forward and tell the AFP that on the night of the bombing [sic] they saw suspicious activity? Was the individual who exploded the device an activist of any kind opposed to the ACL? In the Commissioner’s previous testimony to the committee, he claimed that that the bombing of the Australian Christian Lobby offices was not a terrorist attack by an opponent of traditional marriage, did not involve more than one person, nor was it motivated by any religious, political or other agenda but was instead a “suicide attempt.” Please confirm that this is the story which you wish the committee to believe. Has any ACT or Federal politician or a member of their staff sought to discourage the AFP from concluding that this was a terrorist attack by an activist opposed to the ACL and its advocacy of traditional marriage?”

The AFP essentially stuck to its guns, saying there were no links between one instance of someone harassing the ACL over the phone and the incident, and nothing to suggest it was anything other than what the AFP has said before, which was that it was a suicide attempt. When Roberts read this response, however, he remained adamant that the AFP had it wrong. “We can see a number of inconsistencies with what we see as the facts,” he told AFP Commissioner Andrew Colvin. “Make sure the answers you provide are consistent with the facts as we see them.”

Courting controversy. Margaret Court has been defiant over calls for the Margaret Court Arena to be renamed after the tennis champion said she would boycott Qantas because of its advocacy for same-sex marriage. Court’s views should not be too surprising; she has a long history of opposing gay rights. But who knew that Court had held other questionable views for more than 40 years? Activist Pauline Pantsdown dug up an article from 1970, where the pastor said that apartheid was working well in South Africa, and she would go back any time. 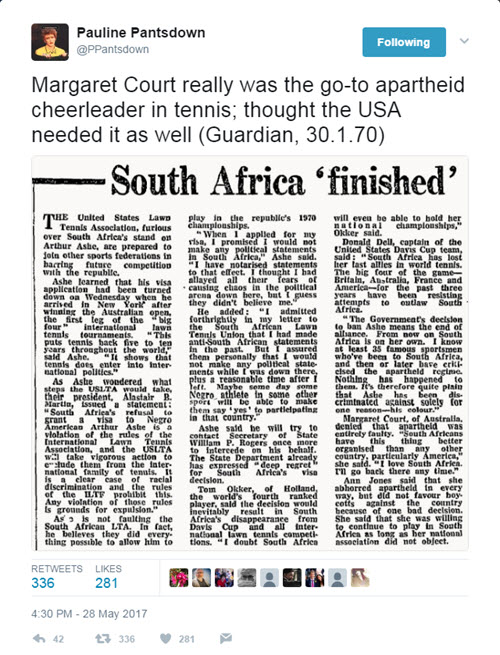 Confirmation that Court has been a consistently crazy conservative…she’s not one for turning,learning or same-sex yearning.

I am sick of the show ponies who call themselves Aussie cricketers, most of whom have lucrative jobs overseas. I’d love to see one or too at the grassroots in the bush. In my town ,cricket is stuffed. I’d like to see them turn up and play for the full series instead of every second test. I exempt about four of them from that. Several of them notably Maxwell are big noters (Warner is another). It will be very odd if they own the photos the media takes. They might in fact suddenly find local endorsements a bit thin. Moreover most of them had public support in taxpayers dollars at the start. Don’t see too many beat up Hyundai excels in the car list, greedy and overrated for the most part. Starc, Smith, Hazlewood and our new opener REnshaw are the exceptions

Winston Peters is a walking argument against many things, but not “the principle of dedicated seats for indigenous groups”. New Zealand has seven Māori electorates which guarantee Māori representation in Parliament, and Winston Peters did first run (unsuccessfully) for office in the Northern Māori electorate; however the responsibility for his long career in government lies with the voters in the general electorate of Tauranga.

Many see the ACL as a mean spirited, sinister and self servicing organisation with no redeeming features. Its all hate, hate, hate for those that do not clap for them.

No need to go back to the 70s – Court was a big Rodent supporter during Truth Overboard & Tampa with some borderline comments, xenophobic to be generous.
Rather like Dame Joan Sutherland objecting to being interviewed by an “Indian” Post Office employee for a new passport.

The Curmudgeon
Reply to  AR

Court- another example of someone who left the Catholic Church because she found it too progressive (possibly on racial issues)! Must have been some ultra-right dinner table conversation in the days when when she caught up with her father-in-law – the awful Charles Court.