Senior staff from ABC radio face the chop. And other media tidbits of the day.

Today in Media Files, management jobs have been cut in the ABC’s restructure of radio, and Crikey has received a ringing endorsement from George Brandis.

ABC managers cut in restructure. The ABC has cut nine radio jobs as part of a restructure flagged by managing director Michelle Guthrie in an announcement in March. In an email to staff, radio director Michael Mason said the changes were coming at “a very exciting time for the ABC”.

Two of the positions were already vacant. Three content directors will be made redundant from Radio National, and one from Classic FM, as well as a senior producer role in Melbourne. The manager of emergency services and community development was also made redundant. Another seven roles will be moved to a central support division. Three jobs from TV and two regional jobs have also been made redundant.

Managing director Michelle Guthrie emailed staff yesterday, summarising her statement to Senate estimates on Wednesday, saying 70 jobs will be cut from TV and news divisions by the end of June, and another 120 jobs were still to go, mostly from management, which include the cuts announced yesterday.

Guthrie said the content fund, also announced in March, would be open for applications from staff from June 14. There will also be nine new positions in arts and science, and an education strategy that will include new content positions in Adelaide. Six of the roles will be in science for Radio National, and one will be a music role at Triple J.

Culture wars update. The news would no doubt have pleased Immigration Minister Peter Dutton, who talked up his distaste for the ABC to Ray Hadley on 2GB yesterday. Talking about Q&A, Dutton said the program was a waste of taxpayer’s money, and there was a “fundamental problem with the ABC” in choosing panellists. In response to the news that Yassmin Abdel-Mageid’s show Australia Wide has been axed, he said, “one down, many more to go”.

Journalist assaulted by US political candidate. Republican candidate for Montana Greg Gianforte has been charged with a misdemeanor assault after allegedly body-slamming Guardian reporter Ben Jacobs questioning him at an event for volunteers. Gianforte took exception to the questions, and, while Jacobs was recording, knocked him over, breaking his glasses. You can listen to the audio of the encounter here. Gianforte has since disputed Jacobs’ account, emphasising he is a “liberal journalist”, but it has been improbably corroborated by a Fox news reporter, Alicia Acuna, who witnessed the incident and wrote an account for the Fox News website. She has also appeared on-air, describing the incident. A special election is being held today in Montana, and is being watched for clues about the political environment in the US.

Crikey not serious enough for Brandis. Crikey received a ringing endorsement from Attorney-General George Brandis in Senate estimates yesterday. When Crikey journalist Josh Taylor’s piece on Immigration Minister Peter Dutton’s criticism of the Administrative Appeals Tribunal was quoted in a question to Brandis, he asked for a “serious source”. Watch the exchange here. 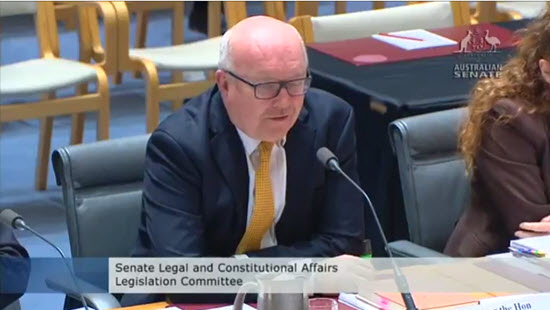 Front page of the day. This colourful front page from the NT News is apparently photoshopped, according to the paper’s Twitter account because the PM “can’t really play the ukelele”. 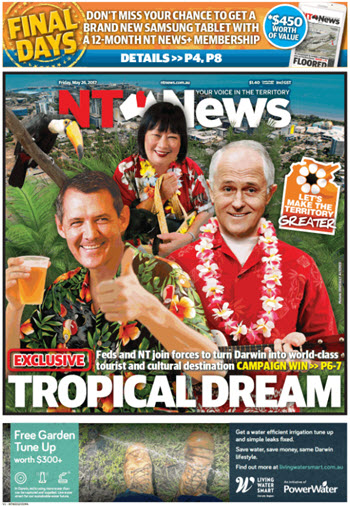 Daily Mail‘s print performance slides. The Daily Mail is arguably Britain’s loudest, most conservative newspaper, and is probably the most influential — backing Brexit last year and giving blind support to the Conservative Party led by Theresa May in the June 8 election campaign. But that does not translate well to revenues and profits in these days of all things Facebook and social media. In fact, the paper’s future with its owners, the Daily Mail and General Trust — controlled by the wealthy Harmsworth family for 11 years — could be shortened if it doesn’t lift its game.

The paper’s performance financially in the six months to March was not good and was only made to look better by the Mail Online website which continues to grow its ad revenues (but so far there are no signs of profits). The Mail Online had 60 million pounds of advertising revenues in the March half year, representing 46% of the media group’s total ad revenues. The next year should see digital ad revenues overtake print advertising revenues, marking a watershed moment for the company. But the media group (like News Corp) is still dominated by the performance of the newspaper titles, with the media division still accounting for almost 40% of revenues and a third of operating profits.

American chief executive Paul Zwillenberg is reshaping the company and in a meeting with analysts on Thursday said that even the Daily Mail, which has been part of the Harmsworth newspaper dynasty since it was founded in 1896, could be sold. — Glenn Dyer

Fairfax to push media merger in NZ. In a sign of the desperation of Fairfax Media and APN News and Media to get their Kiwi operations merged, and out of their hair completely, the decision by NZ’s competition regulator to deny the merger of NZME (APN) and Fairfax NZ will be challenged in court. Under the plan Fairfax Media was to get A$53 million in cash, two board seats and a 41% stake in the merged company, all of which would have flowed back to the Australian parent, which is now grappling with two possible bids from private equity companies. NZME and Fairfax said in a joint statement on Friday they will file an appeal against the New Zealand Commerce Commission’s decision early this month to block the merger.

The appeal states the NZCC was mistaken to conclude there are separate markets for online news, Sunday newspapers and community newspapers given the overlap in readership and advertising. They also say the regulator did not give enough consideration to the advertising revenue taken by Google and Facebook, or the number of other news sources available online. — Glenn Dyer

Glenn Dyer’s TV Ratings. The AFL game last night on Seven between Geelong and Port Adelaide was one of the best this season (796,000 nationally) — many rapid lead changes, hard fought, but mostly without rancour or “jumper punching”. Only a few points in it, with Geelong grabbing the lead from a snap shot in the dying embers of the match. Last night’s game was how all football codes should be played. Will next Wednesday’s extravaganza in Brisbane (Origin 2017) be similarly close and energetic? Geelong versus Port Adelaide and Masterchef Australia (1.26 million, the most watched non-news program of the night) were the only programs with colour and movement last night. Tonight, Swans play Hawthorn — is it revenge time?

“Sirrius sauce”? Maybe George was just cloud sourcing …..
…..”I wondered loudly, as a clown
Than stumbles over facts and riffs
When all at once I saw crowd –
The wedding of my mate Mike Smith.
I’ll call it work, it’s such a breeze,
‘Here’s my receipts – take care of these’ ….”

Brandis’ regard for Crikey would seem to recall Aristophanes’ “to be insulted by such is to be garlanded with roses.”