PM’s new CoS keeps salary under wraps. When Malcolm Turnbull brought in the secretary of the communications department, Drew Clarke, as his chief of staff in the Prime Minister’s Office, a special allowance was given so Clarke could retain his high secretary wage while working in the PMO. When Clarke was in Turnbull’s office, he was paid $691,200 per year, more than the PM on $517,338 per year, and well more than Opposition Leader Bill Shorten on $368,224 per year.

Clarke has retired and been replaced by Greg Moriarty, a former ambassador to Indonesia and national security expert who had been working as an adviser in the PM’s office since September last year. Labor, in estimates last night, attempted to figure out whether Moriarty, like Clarke, was on a special pay deal that put him well above the standard pay bands for ministerial staffers, but Special Minister of State Scott Ryan said he would not release the pay for individual staff. He said he would take the question on notice to review what the practice was, but he said his personal view was that individual staff should be allowed privacy over their pay. He indicated he would be willing to provide details on whether Moriarty was paid above the standard bands.

Labor had been chasing detail on this earlier in the week with the Department of Prime Minister and Cabinet, and Labor Senator Jenny McAllister said it was “extremely disappointing” that Ryan was refusing to hand over the information when asked.

“There is an expectation that basic information about ministerial staffing will be available … It is extremely disappointing we find ourselves unable to get the information we are asking for tonight. We are asking straight-forward information.”

Shades of Greens. Last Friday, we reported on a possible split in the Queensland branch of the Greens, resulting from the party’s non-committal public response to the Gonksi 2.0 schools funding policy. We’ve heard since to say this indecision originates in Victoria. According to one tipster, every other state Greens party, and much of the membership in Victoria, is opposed to Gonski 2.0, but the “party hierarchy” in Victoria supports it. The Victorian Greens represents “nearly half of the total Greens membership across the country” and so holds “considerable sway over federal decisions”. Hence, according to the tipster, the Greens’ reluctance to explicitly support or oppose the legislation. We have also heard whispers that, particularly in Victoria, “party members considered to be of the ideological left of the Greens have been pressured to leave” in an attempt to quell “factional warring in the party”. Do you know more details? Are you a Grassroots Greens member who’s been nudged towards the door? Let us know. You can remain anonymous if you wish.

Enter stage right. As if on cue, after we discussed just how awful a Senate committee chair Ian Macdonald is yesterday, he decided to give us one of his most ham-fisted displays in memory at yesterday afternoon’s session of the Legal and Constitutional Affairs estimates hearing. After Greens Senator Nick McKim repeatedly interjected during Eric Abetz’s badgering of Gillian Triggs (the Coalition, apparently, couldn’t let her final estimates appearance go without some more attacks on her), Macdonald tried to eject McKim from the hearing, something he has no power to do, then said McKim would not be allowed to ask any further questions for the duration of the hearing — something else he has no power to do. This led to what Crikey understands was a very heated private meeting of the committee in which the Clerk of the Senate provided advice that Macdonald was out of order. Macdonald then had to return to the hearing and publicly admit he had no power to do what he had threatened to do. We’ve been watching estimates since the Keating years, and can’t recall a more abjectly humiliating performance by a committee chair.

Still, there’s always someone worse. Pauline Hanson later graced the committee with her presence and made an even bigger fool of herself, trying repeatedly to get the head of ASIO, Duncan Lewis, to talk about the danger posed by Australian Muslims. Lewis was having none of it, repeatedly pushing back against Hanson, pointing out that at least one planned terror event disrupted by ASIO had been by right-wing extremists and that ASIO was uninterested in the religion of people, only whether they posed a threat. Hanson, both in questions to ASIO and later to the Administrative Appeals Tribunal, at times actually struggled to intelligibly read out written questions presumably prepared for her by James Ashby, leaving witnesses having to guess at what she was asking. It made Macdonald look a model of coherence and discipline.

Ace troll. Former tennis star Margaret Court is in the news again for her views against marriage equality, this time for a letter to the editor in The West Australian saying she would boycott Qantas for the company’s public position in favour of changing laws to allow same-sex couples to marry. The outrage has led to an awkward position for Tennis Australia and the very arena that bears her name in Melbourne. The Margaret Court Arena Twitter account tweeted last night:

“Melbourne & Olympic Parks does not support Margaret Court’s comments and we remain an organisation committed to embracing equality, diversity and inclusion; from our fans to our colleagues who deliver the events that people love to attend.” 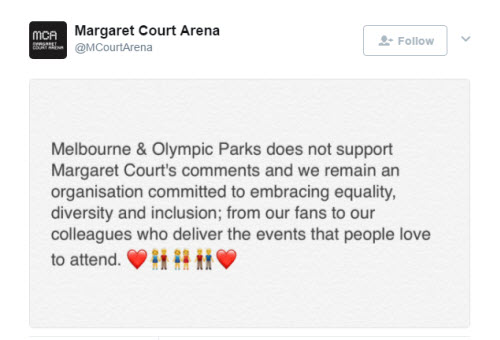 Hawkey used to call them “silly old buggers”, but her Christianity puts her in a sillier class again..!!

I’m pretty sure that Court came out with some tooth aching xenophobia during Truth Overboard in her support of the Rodent.
Perhaps some wonk or googler can find her comments.

Maybe they should just change the name of the venue from Margaret Court Arena to Bigoted Hater Arena.

This comment is exactly why a plebiscite in same sex marriage is not a good idea. Although Margaret Court’s comment is not one I agree with, I agree in free speech which gives her the right air her opinion without any personal ramifications from social media etc etc. What is Australia coming to when we verbally and non verbally attack someone who disagrees with our beliefs? We can disagree without personalising it.