Former Family First Senator Bob Day will not be required to pay back the close to half a million he owes to the taxpayer.

As Centrelink chases down debts as low as $20 for some welfare recipients, the government has decided to waive nearly half a million dollars owed to the taxpayer by former Family First Senator Bob Day and his staff for the time when he was declared ineligible to be elected by the High Court. 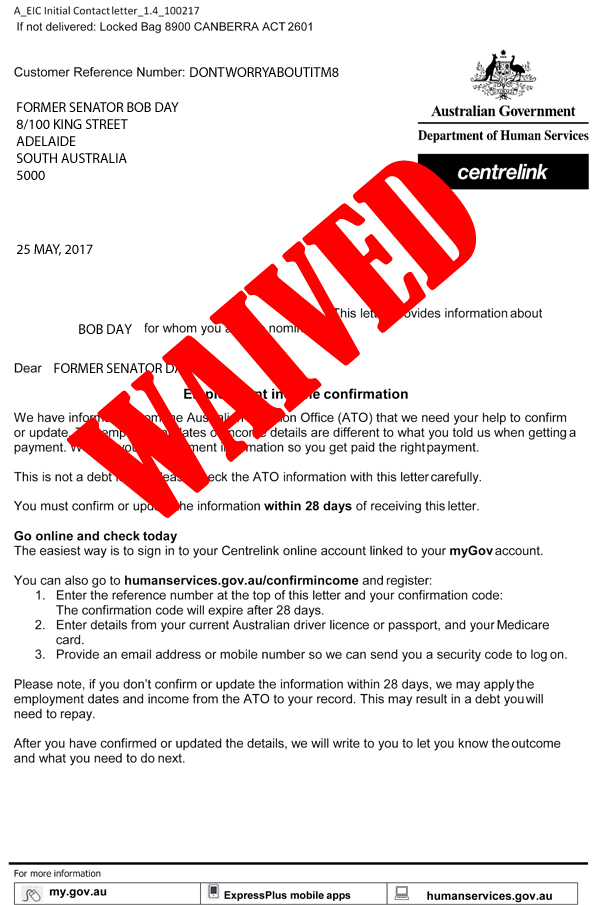 In April, the Court of Disputed Returns found that Day was incapable of sitting or being chosen as a senator because the lease of his Adelaide electorate office was effectively paid to him by the Commonwealth, which was in breach of section 44 of the constitution.

Department of Finance officials then wrote to Day saying that he had to pay back salaries, superannuation, and staff payments. Day applied to the Special Minister of State to have the debt waived and Ryan yesterday confirmed the government’s intention to absolve Day of his debts.

Deputy Prime Minister Barnaby Joyce on RN Drive yesterday confirmed the amount could be as high as $464,000 for the total costs back to February 2016 — the day the lease was signed and Day became ineligible. Joyce defended the decision, stating that Day had turned up to work to do the job, and indicated it was unfair on the staff to have to pay the money back.

The $464,000 is on top of the $1.8 million in grants given to trades training schools connected to Bob Day.

It came just a week after the Senate heard that Centrelink had a policy to waive debts of less than $50 but has pursued debts as low as $20 if it was the remainder owed of a larger debt.

Former-One-Nation-party-member-who-never-was-a-senator-but-still-thinks-he-is Rod Culleton can also apply for a waiver but hasn’t done so yet.

Should Bob Day even be in the Senate?

Any citizen can sue Mr Day to recover part of that money.
You should do it Josh. You will be a constitutional hero.

The following is copied from “House of Representatives Practice”:

“The Constitution states that, until the Parliament otherwise provides, any person
declared by the Constitution to be incapable of sitting as a Member shall be liable to pay
£100 ($200) to any person who sues for it in a court of competent jurisdiction for each day
on which he so sits. The case of Senator Webster (see p. 137) prompted the enactment of
the Common Informers (Parliamentary Disqualifications) Act 1975, one of the main
provisions of which was to fix a maximum penalty for a past breach. As under the
constitutional provision a penalty of $200 per day could amount to an enormous sum where
the infringement did not become apparent until years after it had occurred, the Act provides
for the recovery of a penalty of $200 in respect of a past breach and $200 per day for the
period during which the Member sits while disqualified after being served with the
originating process. The Act also restricts suits to a period no earlier than 12 months before
the day on which the suit is instituted. The High Court of Australia is specified as the court
in which common informer proceedings are to be brought.”

This is ridiculous. The guys were working and getting paid for putting in the hours. Are you seriously suggesting that his staffers should pay their salary back? By that logic if any company is found to be performing business illegitimately then the staff working for the company should repay their debt. That’s not an employee : employer relationship… It’s a shareholder type risk. That’s a lot of risk any employee is taking on. How would banks feel about selling mortgages to an employee workforce who are at risk of having to repay their salary. Obviously I’m taking this to an absurdity with this comment but that’s the point, this whole idea of employees having to pay back wages retrospectively for work already performed is absurd. Pick your battles Crikey!!

Just as it is ridiculous the way the robo-Government is picking on many normal people for supposed debts to Centrelink. I think that was the point…

I hear what you are saying and I can also see that this perspective is resonating out there in voter land (especially amongst people impacted by the robo-debt) but I just don’t think it’s a fair comparison … Wages paid versus debt owed – very different things.

Pretty sure the letter was sent to Day- not his staff. Day was asked by the ATO ( briefly) to pay back the salaries and superannuation, not the staff. It was Joyce who dragged the staff into it, putting it back on them and you’re letting him, Dan. Classic bait and switch.

If Family First and the Nationals really were first and foremost about families and the nation, Day would have copped it sweet ( like all those poor Centrelink recipients) and put his hand in his pocket. If he was short, Joyce would have put his hand in his pocket to help his mate out- maybe he’d have a whip round the mates. What would NOT have happened was socialising the debt – making it the responsibility first of Day’s staff then ultimately of Australian families.

You need to watch the pea and thimble closer, Dan.

Thanks Charlie, I’ll watch the pea & thimble a bit closer …. You might care to pass that advice onto Josh as well given that this article (on which we’re commenting) was also talking in the context of Day & his staff and not just Day. But even if we all agreed that Day’s staff should not have to pay back their wages, I still think it’s ridiculous to ask Day to pay back his wages given he’s done the job for x period and i cannot think of any precedents where people have to repay wages. And, again, wages versus debt owed are two very different things.

Thee robo debt generally refers to the automated process that generates the demands with menace but has anyone had the eerie experience of speaking to a Centrelink officer recently?
“Computer sez no” would be intelligent interaction by comparison.

What happens to the legislation they’ve passed?

Has Tony Abbott actually produced evidence that he did not hold dual citizenship at any time during any of the time he claimed the salary and expenses of a legally elected politician? Who has seen it?