Today is all about money -- just what is going on at Australia's big banks, who has made it to the 2017 Rich List and which schools have it and which don't. It's the news you need to know, by Sally Whyte and Max Chalmers.

We’ve learnt a lot about the inside workings of the high levels of Australia’s banking sector and how they deal with the government, with The Australian‘s Pamela Williams revealing just how and why former Queensland Labor premier Anna Bligh became the Australian Bankers Association’s boss earlier this year. Williams lays out why the ABA wanted someone like Bligh, with NAB chief executive and ABA chairman Andrew Thorburn saying: “We wanted a new, strong leader who would connect with the community and consumers — and would be strong enough to challenge us. And everything I’ve seen since says she’s the right person for the job.”

It’s not just that Bligh is a former Labor politician (and current Labor Party member). As is already public, the Coalition was blindsided by the appointment, and while Thorburn called Treasurer Scott Morrison and PM Malcolm Turnbull (a call that is described as “an attempt to remediate the situation”), there’s a view there wasn’t enough warning before the appointment was made public. As Williams writes, the phone calls made to the bank bosses on budget day to warn them of the bank levy were also quite late — “either a fine coincidence or it was touche”.

But the inside word on the banks isn’t over. The Australian Financial Review‘s Phillip Coorey reveals through leaked agenda papers from ABA meetings that the sector has spent almost $7 million in a year in a public relations exercise that has had “close to zero” effect on fixing the images of the banks. An ABA council agenda from December has two warnings fro the sector — one a royal commission into the sector, which has been pushed by Labor and some sections of the crossbench and the Nationals, and this possibility:

“… death by a thousand cuts from the current government, which has made it clear that, so long as banks remain a political issue, it will continue to make new announcements against the banks, including imposing new regulations and making further demands for banks to fund government initiatives.”

So while the phone call on the bank levy came late, it wasn’t entirely out of the blue.

“They already don’t like you very much,” Scott Morrison said to the banks after the announcement of the budget, on the prospect of passing on the cost of the bank levy to customers. But it’s a lot more complicated than that.

The Australian Financial Review’s Rich List is out in full today, and following Anthony Pratt at No. 1, the top 10 has a lot of familiar names. Harry Triguboff is at No. 2, Gina Rinehart at 3 and Frank Lowy at 5. The full list is here, and John Stensholt’s tips on how to put the list together are also worth reading.

Gonski 2.0: Private schools back funding changes despite 40 per cent losing out

WHAT’S ON TODAY (AND THIS WEEKEND)

Uluru: The National Indigenous Constitutional Convention continues today, and despite a walkout yesterday by some delegates, it’s reported the convention is set to agree on a path to constitutional recognition for Australia’s Aboriginal and Torres Strait Islander people.

Bali: Schapelle Corby is due to be deported from Indonesia tomorrow, but before that, she must report to police as part of her parole obligations. Corby has been avoiding doing so because of the media pack outside the Bali villa where she has been living since being released from prison three years ago.

Sydney: The Vivid Festival will have its “lights on” moment tonight.

Modest spend to fix health, win election, but weakness remains — Matthew Denholm (The Australian $): “Yesterday’s state budget, the Liberal government’s fourth and last before a poll due by March next year, will see spending accelerate after a period of restraint. The largesse at least appears well targeted —on a failing public health system.”

Labor and the budget: all tactics, no legacy — Laura Tingle (Australian Financial Review $): “Nowhere did [Bill Shorten] say what Labor’s plan would be if it were successful in getting the Coalition’s implementation of actual Gonski defeated. As a result, Labor continues to support a model that gives more money to some rich schools and less to others.”

Myths about 1967 referendum should be discarded — Anne Twomey (The Australian $): “For better or worse, this was what was passed in 1967 by the Australian people and despite the best efforts of the myth-makers it had nothing to do with flora, fauna, rights, voting or citizenship.”

British PM Theresa May will press Donald Trump to ensure intelligence shared with the US remains secure, after further details of the investigation into the Manchester bombing were leaked to The New York Times.  While Trump described the leaks as “deeply troubling”, Manchester police have decided not to share any further details with their American counterparts. Though eight people have now been taken into custody, police have said accomplices could still be at large, and a “suspicious item” was recovered from a dwelling in Wigan.

At the NATO headquarters in Brussels, Donald Trump has lashed out at European partners for failing to do their share to contribute to the alliance. After a campaign in which he singled out NATO for criticism, it was expected the president would ease back and express a commitment to NATO’s collective security provision. In the end, however, he did not. — Washington Post

Fighting between government forces and Islamic State-linked rebels in the southern Phillipines has escalated, with 46 people now dead as a result. Members of the little-known Islamist group Maute have captured parts of Marawi City, and the Philippine military has responded by mobilising helicopters and special forces. — Reuters

How Maggie Haberman covers Donald Trump (Elle): “Trump frequently complains about Haberman’s coverage. He’s tweeted, at various points, that she’s “third-rate,” “sad,” and “totally in the Hillary circle of bias,” and he almost exclusively refers to the Times as “failing” and “fake news.” But no matter what Haberman writes about Trump, he has never frozen her out.”

Farming the world: China’s epic race to avoid a food crisis (Bloomberg): “China’s 1.4 billion people are building up an appetite that is changing the way the world grows and sells food. The Chinese diet is becoming more like that of the average American, forcing companies to scour the planet for everything from bacon to bananas.China’s agriculture industry is undergoing a revolution that may be every bit as influential as the industrial transformation that rewrote global trade.”

Australia’s ‘Stolen Generations’ tell their stories (New York Times): “When survivors from a residential school in Fort Albany, Ontario, released documents in 2013 that detailed atrocities from rape to the use of an electric chair on the children, Mr. Sherwood decided to delve into the legacy of the boarding school era. He moved to Sydney, Australia, for at least part of the year and discovered that its boarding school history was much like Canada’s.”

GOP candidate charged with assault on reporter as newspapers pull endorsements (Washington Post): “Gianforte has not apologised for the incident, which upended the race considered by many to be a bellwether for Republicans’ political chances in the era of Trump. Gallatin County police announced the charges late Wednesday” 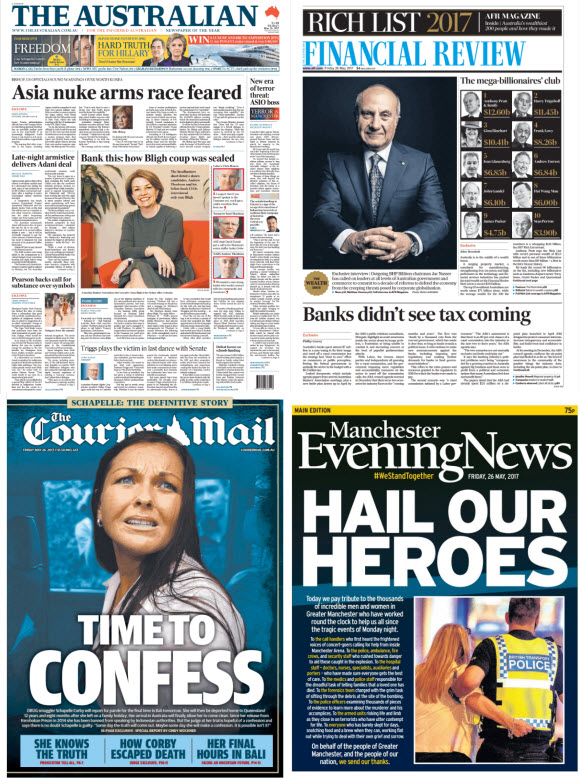