Schapelle Corby is returning to Australia! (Maybe. Probably.) So where will she go? Let's stalk her relatives until we have a list of possible locations.

Today in Media Files, Schapelle Corby is coming home, and we see the bad and good in the media in the wash-up of the Manchester bombings.

Quadrant apologises, doesn’t remove article. Quadrant has apologised for an opinion piece by online editor Roger Franklin in which he said he wished the ABC had been bombed instead of the Manchester concert venue. Editor-in-chief Keith Windschuttle sent a letter to ABC managing director Michelle Guthrie yesterday afternoon after she wrote to the magazine demanding the article be removed and the magazine apologise. This morning the article was still on the website, and the apology had not been posted to Quadrant‘s website. The ABC has reported that the article is not accessible from within the ABC, but it could be having trouble accessing the site because of what we would expect is unprecedented traffic to Quadrant caused by the controversy. 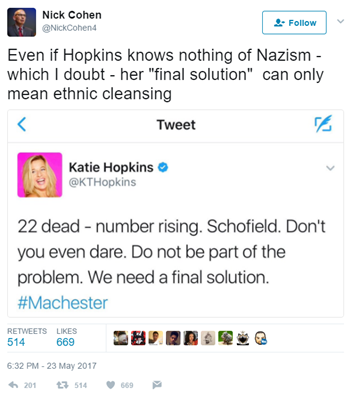 The tweet, since deleted and replaced, has been referred to Metropolitan police, who are reviewing it. Hopkins replaced the tweet to remove the wording used by Nazis to refer to the Holocaust.

Delivering kindness. Reporters at the Manchester Evening News continue to put countless hours into the story that’s shaken their city. In a touching gesture, US paper The Boston Globe bought pizza to be delivered to their transatlantic colleagues, tweeted by Evening News editor Rob Irvine: 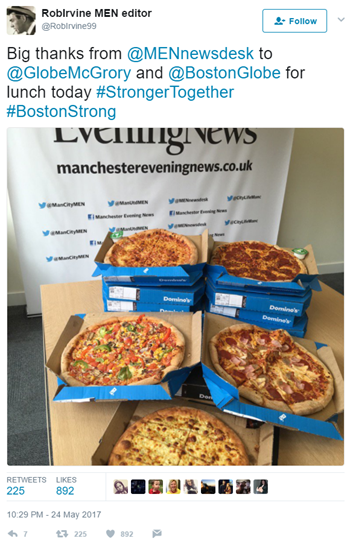 Chasing Schapelle. Schapelle Corby is due to return home to Australia over the weekend after serving her parole period in Bali for smuggling marijuana in 2004, and news organisations are gearing up for full coverage of the story. Corby is reportedly not going to be allowed to return unless she reports to authorities by tomorrow — a condition of her parole. She’s been saying she can’t because of the media packs camped outside her Bali home. Unsurprisingly, Corby didn’t answer the door for A Current Affair‘s Chris Allen when he came knocking. 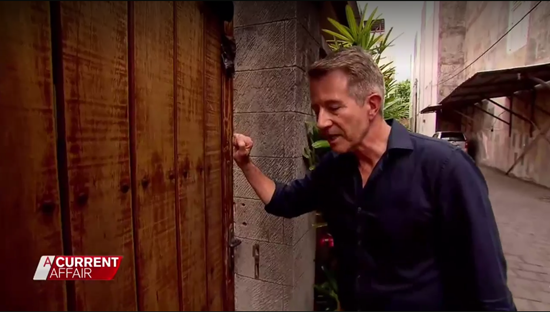 In his report, Allen then popped up at Corby’s mum Rosleigh Rose’s house in Loganlea — where he was simply told “bye” — turned up near her sister Mercedes’ place in the southern end of the Gold Coast, and then went to at a bar and cafe previously owned by Mercedes, where Schapelle apparently won’t be celebrating her 40th birthday.

Even The Australian is getting in on the action, printing a photograph today of a startled-looking Rose outside Mercedes’ house next to a wheelie bin. 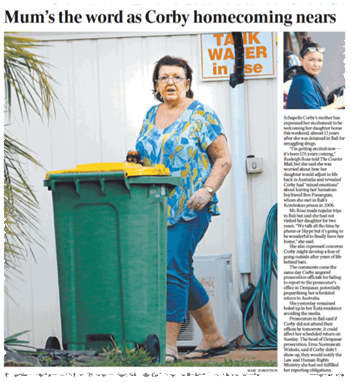 The picture came from Brisbane’s Courier-Mail, which had a full interview with Rose.

Corby’s parole officer Ni Suriaki Ketut told AAP: “Please no more foreigners like this. It makes us so busy. We’re tired. Please just one Corby.” We’re sure that’s a sentiment felt around Bali.

Won’t someone please pie Latho? Following the pie-ing of Qantas supremo Alan Joyce, B-list celebs are living in fear of an attack. Not F-lister Mark Latham. He welcomes it:

Stan and deliver. Fairfax might be clutching at straws with its cross-promotion of part-owned video streaming service Stan. Think carefully — what could the correct answer be for this question in The Age‘s super quiz? 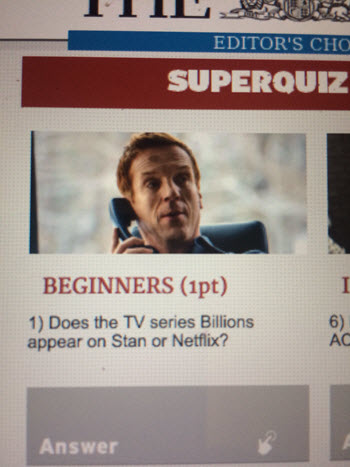 Glenn Dyer’s TV ratings. A close night, but 7.30 again sank in the metros to under 500, 000 — but in the regions it improved. House Rules ruled again for Seven — second nationally with more than 1.5 million viewers. Masterchef had 1.09 million and faded badly in the regions. Ten said it was the most watched program last night in the 25 to 54 demographic, but that was only in the metros. TV is a national business these days, but bragging rights are bragging rights when you are grimly hanging on by your fingernails.

Seven News was again weak on the East Coast, but still had enough from big margins in Adelaide and Perth to win the metros, and enough of a boost from the regions to clearly top the national list.  In breakfast Today was a narrow metro winner, but lost again by a big margin nationally to Sunrise. Tonight there’s AFL on Seven with the Cats playing Port, while Janet King returns to the ABC and Ten has Masterchef at 7.30pm.– Read the rest on the Crikey website

Truckloads of cash awaiting Schappele Corby on return to Australia. Channels 7, 9, 10. New Idea, Womens Weekly, Who, and a myriad of other magazines, a possible book and film will all be lining up for the proverbial this is Schappele Australia’s very own. Cocaine Cassie will have to wait a while.

Re Quadrant’s rant. It is understandable in light of the reaction many people feel about the latest of many Islamic terrorist attacks. Attacks on children appear to the last straw for many. For 48 hours after the Manchester attack, the ABC had not used the words ‘Islamic’ nor ‘Muslim’. They refer to the Muslim terrorist as a “Home Grown” terrorist. Warm and fuzzy since many people think of home grown vegetables as something nice. People have had a gutful of the protection Islam gets from the media generally. Some may see the ABC as being the worst but not the only ones.

In an era when change comes thick & fast A Current Affair & News Corp have somehow maintained their dated styles and standards of reporting non-news. Some traditions deserve to die out.

I move we set up some kind of crowd-funding to continuously pie Mark Latham, with different pledge levels having different levels of pies per funder.
A special level would be a pie floater.

The beauty of it being Latham has stated in print he will not press charges. It’s an invitation to dance.

It will need a lot of zeros to come within cooee of compensating Corby for what she has endured, mostly because of the pig ignorant gutter press putting Indo. judges on their dignity & high dudgeon.
And still no blame on Keelty or the Rodent for falsely claiming during her trial that there was no evidence of airport corruption, despite the Wheeler Report & $200M to rectify such.

The Rodent’s many dubious pronouncements are on record ie: no airport corruption, David Hicks being ‘a dangerous terrorist’ and Saddam Hussein’s certain cache of weapons of mass destruction.

The score for just this small sampling: zero out of three.