Six arrested over Manchester bombing, Lindt Cafe failures revealed, and who is Australia's richest person? It's the news you need to know, by Sally Whyte and Max Chalmers.

The coroner has made 45 recommendations, including changes to the way police make decisions, in handing down his report on the Lindt Cafe seige. NSW coroner Michael Barnes has criticised the delays in police going into the cafe, as well as communications between police and Man Haron Monis and the hostages.

There were six major failings made regarding the way police dealt with Monis, reports The Australian, including granting him bail in 2014, and too much reliance on a psychiatrist who gave misguided advice.

The families of Tori Johnson and Katrina Dawson have reacted to the findings, with Johnson’s partner Thomas Zinn saying:

“While we have been shocked by these failures I would like to make it clear that our family has high regard and respect for the officers who put their lives at risk after waiting so long for orders to act and we acknowledge the grief and trauma that they have experienced.”

A rapid investigation into how Manchester bomber Salman Ramadan Abedi was able to manufacture his explosive device has led to arrests in England and Libya. Abedi’s younger brother, Hashem Abedi, and father, Ramadan Abedi, have been arrested in Tripoli, and the 18-year-old brother is suspected of having links to the Islamic State group. In the UK, police have said it is “very clear that this is a network that we are investigating”, and six people have been arrested.

UK Interior Minister Amber Rudd told reporters that up to 3800 soldiers could be deployed on the streets of Britain. She also castigated US authorities for leaking details of the ongoing investigation to the media, though the leaks have continued since her statement.

The coalition is defending the budget against claims of a $2 billion black hole, with Labor claiming that the bank levy won’t raise as much money as originally expected. As reported by Crikey‘s Bernard Keane and Glenn Dyer this week, the government’s projections on the bank levy are optimistic at best. Meanwhile in The Australian, Treasurer Scott Morrison is spruiking the low rate of growth in spending by the government. In a speech to the Australian Industry Group last night, he said: “In fact, average real growth in spending under this Coalition ­government is lower than the ­average of each of the previous five governments, extending back ­almost 50 years.”

COULD IT HAPPEN HERE?

“The terrorist profile is changing. They are getting younger and they are increasingly known to police and intelligence agencies – if not for terrorist activities then for other violent crimes.” — that’s Dr Anne Aly, Labor MP and counter-radicalisation expert, quoted in the Fairfax papers, saying a similar attack to the Manchester bombing could “absolutely” happen here.

That’s the personal wealth of Anthony Pratt, who has been named at the top of the BRW Rich List ahead of the full list being revealed tomorrow. That’s an increase of $2 billion on last year’s top rich lister Harry Triguboff ($10.2 billion in 2016) and also $2 billion more than Pratt’s wealth last year. The full profile of Pratt and his growing wealth is here.

Uluru: The National Indigenous Constitutional Convention will continue today, ahead of the 50th anniversary of the 1967 referendum. The convention will look at how to recognise Australia’s Aboriginal and Torres Strait Islander people in the constitution.

Melbourne: The defamation trial brought by Rebel Wilson against Bauer Media continues today, after a bizarre day yesterday where Wilson told the court she was related to Walt Disney.

Five factors that will shape the outcome for ‘recognise’ at Uluru — Paul Daley (Guardian Australia): “Legitimate Indigenous divisions would be far more pronounced this time, while illegitimate (racially motivated) opposition from reactionary columnists and megaphone shock jocks would likely resound.”

Misguided, squeamish Liberals are failing Aborigines — Greg Sheridan (The Australian $): “The Liberals do nothing. They appoint an ABC chairman who believes there is no problem of bias at the ABC, a chief scientist who supports an emissions trading scheme, Australian Human Rights Commission members who offer no challenge to the zeitgeist.”

Lindt siege report: tragedy the result of a series of avoidable mistakes — Paul Maley (The Australian $): “The contain and negotiate strategy of siege management was, and is, ill-suited to the nihilistic tactics of ISIS.”

Simon Birmingham’s subtle ministerial style stands out in this cabinet — John Warhurst (Sydney Morning Herald): “Birmingham is the right man in the right place for the Turnbull government. He comes across as conciliatory but firm, measured and careful in his words, refusing to throw fuel on the fire as Dutton, Morrison and Joyce regularly do in other portfolios.”

Our public discourse is weakened by one-trick contrarians — Alex McKinnon (Sydney Morning Herald): “Besides the initial novelty, the appeal these figures have lies in the prospect of reassurance from an unlikely place. If you think young people should stop whining about house prices and just pull their socks up, you’ll love this 34-year-old property mogul who thinks Millennials buy too much avocado on toast.”

Three police officers and two suspected suicide bombers have been killed in Jakarta, Indonesia. Two blasts were heard, though the number of casualties is not yet clear. — Reuters/Fairfax

At least 34 people — including a large number of children — have drowned off the coast of Libya, after passengers fell from an overloaded boat carrying asylum seekers and migrants to Europe. Around 250,00 people are expected to arrive in Italy from North Africa this year, though an estimated one out of every 40 will not survive the treacherous boat journey. — Al Jazeera

ISIS has a strategy to create a media frenzy and news outlets are struggling to disrupt it (BuzzFeed): “The world is shaken by another depraved mass murder. And just like the countless other times before, the mass media coverage seems stuck on a loop: the same few videos of victims panicking, anguished parents waiting for their children, and distraught mothers sobbing dominate our screens, playing again and again and again and again … ISIS has a media strategy, and unfortunately, it is aimed exactly at generating this type of coverage.”

Trump called Rodrigo Duterte to congratulate him on his murderous drug war (The Intercept): “In a phone call from the White House late last month, Donald Trump heaped praise on Philippine President Rodrigo Duterte, one of the world’s most murderous heads of state, for doing what Trump called an ‘unbelievable job’ in his war on drugs. Trump offered an unqualified endorsement of Duterte’s bloody extermination campaign against suspected drug dealers and users, which has included open calls for extrajudicial murders and promises of pardons and immunity for the killers … ‘Keep up the good work,’ Trump told Duterte.’ You are doing an amazing job’.”

Let me tell you a story about Mark Colvin (ABC): “To do an interview with Mark Colvin was to enter the gladiatorial ring. You never knew what was coming, but you knew he firmly believed you should be sufficiently across the subject matter that he should be free to ask you anything at all. There was no point sending a list of suggested questions, he would have seen that only as a weakness.”

Hiding in plain sight: how the ‘alt-right’ is weaponizing irony to spread fascism (The Guardian): “What Yiannopoulos left out, according to Marwick, is that these spaces increasingly became attractive to sincere white supremacists. They offered them venues for recruitment, and new methods for popularising their ideas.” 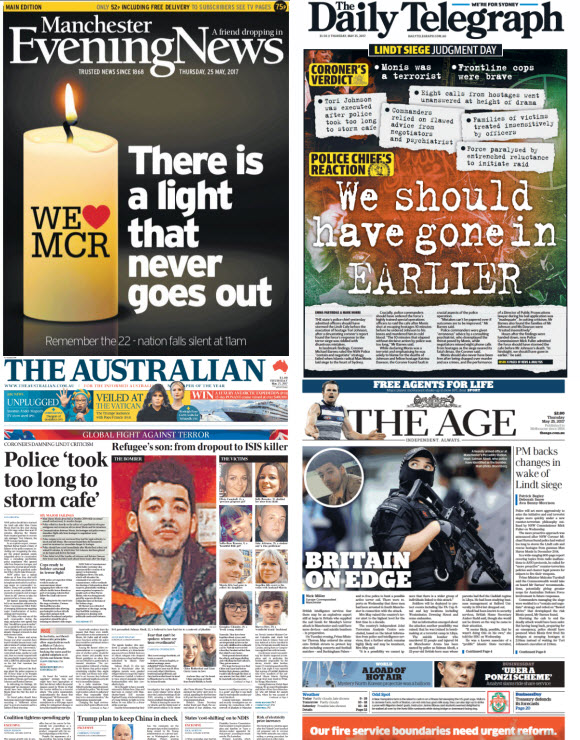