How not to chair an estimates hearing ... Rebel with a cause ... Culleton is relevant! A little bit! Actually, no, sorry ...

How not to run a committee. Estimates hearings inevitably, and rightly, get heated at times. But the presence of a sensible chair can ensure that things don’t get out of hand, and most senators, when given the responsibility of chairing a committee, take it seriously — as do opposition deputy chairs when they have to fill in. Cory Bernardi, whatever else you might have thought of the now ex-South Australian Liberal, was a good, relaxed and fair chair of his estimates committee. Barry O’Sullivan now chairs the Rural and Transport Committee without too much partisan rancour, even if he indulges in the occasional snipe at opposition senators.

But in the Legal and Constitutional Affairs Committee, it’s often one long-running brawl between the likes of the Greens’ Nick McKim and Labor’s Penny Wong and Murray Watt, and Ian Macdonald, the elderly LNP Senator best known for spitting the dummy about not being given a ministry by Tony Abbott and standing up for travel entitlements for former politicians. This morning’s hearing, notionally about the Australian Federal Police, started off with a blue between McKim, Wong and Macdonald over an erroneous claim that McKim had called Department of Immigration officers “brownshirts”.

Macdonald repeatedly cuts into other senators’ questions, intervenes in the most clumsy way to afford government ministers protection even when they don’t want it (yesterday he tried to claim the now-notorious Man Haron Monis letter to George Brandis was “innocuous”, which Brandis declined to agree with), rambles at length in order to chew up the time of opposition and crossbench senators and goes out of his way to take offence at anything a non-government senator says — with the result that Legal and Constitutional Affairs is most ill-tempered, disrupted and unproductive estimates committee. Presumably that’s what Macdonald wants, or perhaps he doesn’t know any better. If the government, which is frequently embarrassed by his performance, won’t sack him from the committee, maybe it should get one of his colleagues to encourage him to learn how to chair.

Culleton doesn’t want in on this party. Last we reported on the problem besetting the Select Committee on Lending to Primary Production Customers — the brainchild of Nationals Senator Barry O’Sullivan and now a pet project of One Nation’s Malcolm Roberts and Brian Burston, The deadline for submissions was extended last week after it was reported there have only been about 20 submissions.

Roberts has even reached out to WA senator-that-never-was Rod Culleton to encourage him to make a submission, which Culleton tweeted was calling on him to “give the banking enquiry teeth and help with submissions”.

However, Roberts was quick to deflate Culleton’s claim, replying: “We agreed on no such thing All I have done is to encourage you to make a submission after you said you weren’t going to”. 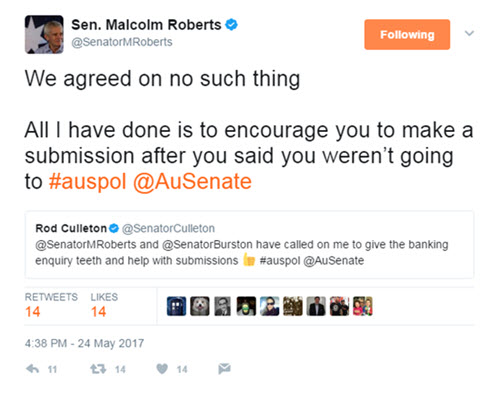 Mo moths, mo problems. Another year, another moth problem at Parliament House. Staff have been told to “remain vigilant” against the threat of case making moths.

“They will usually be found in carpet or clothing, and are very fond of organic fabrics eg (wool, silk or cotton materials). There have recently been documented cases of case making moths being found on the second floor, Senate side, in particular under furniture and artwork plinths.”

Media organisations stationed inside the press gallery have been told to keep a lookout in their own offices. Our spies tell us they are yet to see any moths, which is a good sign. In previous years they have been heaped in piles around the halls of power.

Wilson’s case is in the bag. The defamation trial in which Australian actress Rebel Wilson has accused Bauer Media of destroying her media career in a series of articles published two years ago has taken some strange turns over the past three days. There have been impersonations, viewings of Wilson’s work and the story of how she is a member of “Club 33”, a secret exclusive club at Disneyland, which she says she was allowed to join because she was told growing up that she was related to Walt Disney’s wife. It’s quite a story, and reporters say the court has been packed every day to hear the case. A tipster even thought Wilson was carrying a Mickey Mouse-shaped handbag — which would really be dedication to Disney-fandom. On closer inspection, the bag is actually a bear — but it does feature the curved ears that look remarkably like the iconic Disney character. 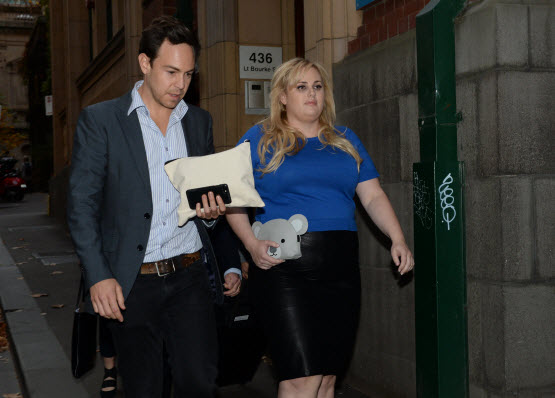 There is no way that Rebel Wilson’s handbag or ‘clutch’ looks like Mickey Mouse.

He is definitely the complete arsehole’s arsehole…..how incompetent does a PM have to be to let someone like him chair a committee..?

There’s a big difference between casemaking moths and bogongs. You are unlikely to see clothes moths heaped in piles; you need to look quite carefully for them, and often, when you do find them, they have already done the damage. Bogongs are harmless, very visible, and delicious.

Macdonald doesn’t have to be Chair to waste time & run interference for his side of politics – I had the misfortune to watch him several times on other Legal & Constitutional committees and he generally takes the majority of time but is never pulled up.