The fall in the level of women in Australia's tech sector continues, while manufacturing had one of its best years of recent times, employment data shows.

The proportion of women employed in the information and communications tech sector plumbed a long-term low at the start of the year, employment data shows, as the tech sector struggles to address its lack of diversity.

Trend data from the Australian Bureau of Statistics on industry and sub-industry employment for February 2017 shows that just 35% of people working in the Information, Media and Telecommunications category were women — the lowest level since 1990. In raw numbers, that was 72,100 — the second-lowest number of female employees since 1995. And the proportion of women in the telecommunications sub-category was 22% — and the first time since 1993 that the number of women in that sub-sector fell below 20,000.

The level of women specifically in software engineering (computer system design and related services) was just below 22% — a strong contrast with the near-50% level achieved in the early 1990s.

The ICT industry continues to struggle to deal with perceptions it has a cultural problem with women, as well as dealing with the consequences of a huge fall in the number of girls and women studying STEM (science, technology, engineering and maths) subjects. While other industries have addressed their reliance on 457 visas and curbed their use, Australian tech companies continue to draw heavily on foreign workers and is currently urging the government to retain software developers as a category under the rebadged 457 visa. Successful Melbourne firm Envato has been upfront about its mixed record in increasing the number of women in its ranks, reporting in November that it had lifted the number of women in tech roles by a small amount.

[Keane: the looming crisis for women in Oz tech]

The data also suggests that the most recent rapid expansion in jobs in health and social care — Australia’s biggest and fastest growing employer of recent years — has definitely come to an end. The sector peaked in August 2016 at 1.54 million people in trend terms, and has shrunk slightly since then to just below 1.5 million. 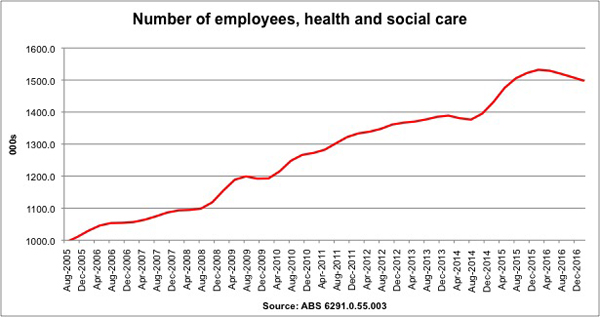 The decline in recent quarters appears to have been in hospital staff numbers; the bigger medical services sub-industry hit a new high of 547,000 (in original numbers).

Manufacturing employment had its best year in recent memory in 2016, growing 4.5% in trend terms to recover to well above 900,000 jobs, when it looked in 2015 as if it would be headed toward 800,000 — despite the close of Ford’s automotive plant in October. However, the closure of Holden and Toyota’s local operations later this year are still in the offing. Meantime, the other fast-growing sector, professional services, cemented its position as a million-plus employer, growing by 2.1% in trend terms over the course of 2016 to over 1.02 million jobs.

Anecdotal evidence supports your suggestion that the over-use of the old 457 visas is a key factor in why the record is so poor in ICT. There is no need for 457 visas in this space as there are an abundance of local graduates who can’t find work in the industry. Of course, that would require an investment in on-the-job training, but that may end up being cheaper anyway. I have yet to here of an ICT project that didn’t end up costing multiples of the nitial cost while providing an inferior outcome (ABS Survey anyone?).

Certainly has been the case in places I have worked where there was a heavy reliance on 457 visas to staff their project teams.