Fairfax is cutting its video staff to bare-bones levels, though the company says a final decision on numbers has not yet been made.

Today in Media Files, video teams are to be cut at Fairfax, and the tragedy of Cyclone Debbie is good news for the Townsville Bulletin.

Video staff to be cut at Fairfax. Editorial staff in the Fairfax metropolitan newsrooms are starting to learn about which jobs are likely to go, even as the voluntary redundancy program is still open. The video team has been told just three positions would be left across the country, and the websites will rely more on third-party providers, including the ABC. Video desks at all the metropolitan mastheads were named as one of the areas that would be likely to be reduced when the redundancies were announced earlier this month. A Fairfax spokesman said the number of three video staff remaining is wrong, but numbers were yet to be confirmed, and this would not be known until after the voluntary redundancy program had ended.

“We have recently been discussing a number of proposed changes with the SMH/The Age video teams, including staff reduction. No decisions have been made and won’t be made until the voluntary redundancy process currently underway in our newsrooms has concluded. We will continue to have in-house video capability and will continue using content from a number of third-party sources.”

When bad news is good news. There’s no doubt that local media is important to communities during a crisis, but boasting about that increased audience is in poor taste. That is what the Townsville Bulletin has done today, attributing its readership increase to coverage of Cyclone Debbie: 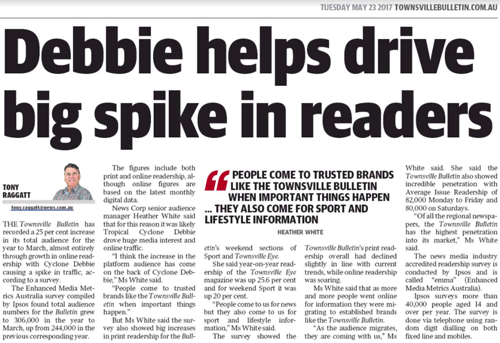 Foxtel Play slashes channels. Foxtel has cut 19 channels from its Foxtel Play streaming service. The channels, including BBC World News, CNN, Discovery Science and several music channels, will now only be available on the full broadcast service, which requires the IQ box, after June 5. The cuts weren’t announced to its subscribers, other than a post on its community forum. In the six months to December, Foxtel lost 100,000 subscribers.

Foxtel said in a statement:

“Periodically we make changes to our proposition in our push to give customers more of the content they want, delivered how they want to watch it. Most of the content from the broadcast channels is still available on demand, which is how people are increasingly using Foxtel Play … Foxtel Play customers will continue to enjoy access to the best choice of blockbuster movies, new shows and complete seasons, including every new HBO drama and Foxtel originals, as well as live sport.”

Ten shares hit all-time low. Ten’s shares have now dropped to a new all-time low of 20 cents — that’s the equivalent of two cents before last year’s one-for-10 consolidation. It’s the market maintaining its scepticism about the changes to the media laws, including the licence fee cuts, and the chances of the company getting its $250 million loan to replace the $200 million revolving credit from the Commonwealth Bank. — Glenn Dyer

Fox News losing its hold. Donald Trump’s growing political problems are now starting to impact the previously unassailable position of the Murdoch clan’s Fox News Channel, leading some US analysts to wonder if the network’s legendary hold on its mostly older audience is as strong as previously claimed.

The big worry for Fox and the Murdoch clan is the continuing inroads that MSNBC (which is considered to be more “liberal” than the right-wing Fox News) is making in the ratings, along with the other rival, CNN. And driving that is MSNBC night-time host Rachel Maddow (she had the Trump tax return leak in March) who is a liberal woman, the direct antithesis of the sort of female host favoured by Fox. Maddow is the first openly gay prime-time news anchor in the US, a background that must get up the noses of the crassly male Fox News and the Trump White House.

But she and her network are at last having a growing impact on the US political debate. Ratings for last week show that MSNBC was No. 1 among cable news networks in prime time news-demo viewers. MSNBC clocked an average of 610,000 viewers aged 25-54 in evening prime time. CNN was second with 588,000, and Fox News was third with 497,000. Deadline.com said Fox had five consecutive third-place finishes in prime time last week — its longest No. 3 streak in the demographic for 17 years.

If this continues for much longer, Fox News’ supremacy will be under more pressure than it has been for years. The move away from Fox has coincided with the increasing problems for President Trump.

But the biggest change is happening in the 8pm to 10pm slot — that used to be dominated by Fox’s Bill O’Reilly, who was sacked and paid a reported US$25 million to leave after a torrent of sexual harassment claims proved too much for the Murdochs and advertisers. Now CNN’s Anderson Cooper has grabbed the top spot at 8pm with O’Reilly’s replacement, Tucker Carlson (chosen personally by Rupert Murdoch), in third last week.

But Rachel Maddow at 9pm is now the most watched show on cable news prime time. Her MSNBC show topped the week among adults 25-54 with an average 760,000 viewers in the key news demo.

And while Fox News still leads May in both the 25 to 54 and total viewer measures, this last week will decide who wins the month. Maddow pushed MSNBC to its first ever win in the prime time news demo of 25 to 54 and another strong performance this week could give the network its first ever win for a month. US analysts point out that news channel viewing is up sharply on a year ago when the presidential primary race was hotting up. Fox finished 2016 as the clear winner among cable network news channels. Now last week it was third. With Roger Ailes gone and now dead, Megyn Kelly fleeing to NBC and Bill O’Reilly sacked, Sean Hannity is the only major name left in Fox’s prime time line up from a year ago. — Glenn Dyer

Glenn Dyer’s TV ratings. Four Corners last night laid it all out for viewers to see about the debacle that was the Lindt Cafe siege in late 2014. This was a far more definitive look that anything we have seen before, thanks to Sarah Ferguson’s great reporting skills and the powerful contributions of the families of victims Katrina Dawson and Tori Johnson. It grabbed 905,000 national viewers and deserved more. Sympathetic but hard-edged reporting from Ferguson — it showed why she is head and shoulders above anyone else on Australian TV.

But it was Seven’s House Rules that starred — its second big audience of the season, 1.704 million, the same as Sunday Night’s. It had 1.026 million in the metros and 677,000 in the regions. The program is now clearly ahead of The Voice on Nine (1.420 million) and Masterchef Australia (1.275 million viewers nationally). That’s 4.4 million people watching these programs on Seven, Nine and Ten, which makes a mockery of all the puffery from the digital urgers that linear legacy TV is dead. I bet there weren’t 4.4 million people watching Netflix and Stan last night. And any of the 4.4 million were sharing their screens with Facebook, Twitter etc. Many should have been watching Four Corners, or stayed with TV and changed to the ABC. — Read the rest on the Crikey website

Note: This story was updated to include Fairfax’s assertion that the number of three remaining video staff nationally after cuts are made is incorrect.

Re Glenn Dyer’s TV Ratings . . . . Ferguson’s Four Corners last night. There could be no better example of why Australians must demand of the federal government an ironclad guarantee safeguarding a full and open independent ABC.

Comfort and support to all the families who now have truth.

Hooray, hooray, the increasingly bad news for the Murdoch NewsCrap organisation, is wonderful news for Australians. May the bad news keep rolling along at an exponential rate.

Video is basically where the money is on the web right now. With the ongoing collapse of television there’s huge demand for video advertising, and an equally huge undersupply of inventory to fill it. Which is why CPMs for video ads are 3-4x everything else, and every website is autoplaying video and screw you if you don’t like it.

It would be the best possible outcome if the Drumpfster & mudorc crumbled and collapsed together.
Sign, one can but dreram.