The government takes on the Catholics, the pressure on One Nation increases, and there are plans for compensation for the stolen generations. It's the news you need to know, by Sally Whyte and Max Chalmers.

According to the report, Department of Education data show that although federal funding is meted out according to need, it is paid to state and territory education commissions “in a lump sum, which they distribute among schools as they see fit”. The analysis covers 22 schools in Sydney and Melbourne, and Education Minister Simon Birmingham said: “I think people would be very concerned if they thought that less well-off schools were subsidising wealthier schools.”

The government is releasing its school funding plan into the House of Representatives today.

ASHBY AND HANSON UNDER PRESSURE

The pressure on Pauline Hanson‘s chief of staff James Ashby is increasing, with the Prime Minister saying “In the first instance Mr Ashby — or I should say his ­leader of the Pauline Hanson party, Senator Hanson herself — should respond” to reports they planned to make money out of the upcoming Queensland election.

Ashby and Hanson held a press conference yesterday, and Ashby also gave an interview to the ABC’s 7.30, defending his “poor choice of words” revealed in a recording in The Courier-Mail yesterday, in which Ashby and Hanson spoke about a plan that involved making money from One Nation candidates through mark-ups on advertising material. Ashby said they didn’t go ahead with the plan because it was only part of a “brainstorming session”.

Federal Labor, and Queensland Labor and LNP representatives have also backed moves to investigate Ashby and Hanson over the recording.

Canberra: Prime Minister Malcolm Turnbull and Opposition Leader Bill Shorten will mark the 20th anniversary of the inquiry into Australia’s stolen generations by receiving a report from the Healing Foundation. The report calls federal, state and territory governments to share the cost of compensation for members of the stolen generations.

Melbourne: The defamation trial brought by actor Rebel Wilson against Bauer Media continues today. Yesterday the court heard that reports in Australian magazines had affected Wilson’s ability to get more work in Hollywood.

Basel, Switzerland: RBA deputy governor Guy Debelle will give an address titled “How I Learned to Stop Worrying and Love the Basis”.

Labor shares the budget illusions — Craig Emerson (Australian Financial Review $): “Labor should support the full Medicare levy rise. In doing so, it would lock in the National Disability Insurance Scheme, a signature Labor reform for which Bill Shorten can take much credit from his time as the Rudd government’s parliamentary secretary for disabilities and children’s services.”

Treasurer Scott Morrison becoming a huge disappointment — Tom Switzer (Sydney Morning Herald): “It’s difficult to avoid the conclusion he lacks the nerve and the political muscle to make the unpopular spending cuts that are urgently needed to address runaway debt.”

Australians are in dire need of a pay rise — Sally McManus (Sydney Morning Herald): “The Prime Minister bats away the claims of minimum wage earners, urging people to consider the “economic impact” of wage increases. Yet at the same time the Coalition is relying on wage growth across the broader economy to help balance the budget.”

There’s plenty to privatise at the Treasury Department — Judith Sloan (The Australian $): “It’s time for Treasury to take some of its own medicine. Why not contract out the economic forecasting function using a competitive tender? It certainly would be cheaper than having the huge standing army of underperformers.”

Americans who are dissatisfied with their president may be looking to Brazil for inspiration, as the country mulls impeaching its second leader in the space of a year. President Michel Temer, who ascended to power after Dilma Rousseff was impeached, is now himself facing an impeachment attempt after he was captured on tape condoning a bribe. Temer insists the recording was altered and has vowed not to quit, even if he is indicted. — Reuters

The Turkish government has summoned the US ambassador after an altercation between protesters and members of President Recep Tayyip Erdogan‘s security detail in Washington, DC. Despite video footage showing the president’s men beating unarmed US protesters, Turkey’s foreign minister blamed US police for failing to respond to the protest in the first place. Tension between Turkey and the US has increased since the Trump administration committed to arming Kurdish forces fighting against Islamic State. — Washington Post

British PM Theresa May has been forced to back down on a policy that would demand people who require care at home pay more for it. The policy was dubbed a “dementia tax” by the Labour party and might have contributed to a significant polling boost for Jeremy Corbyn’s opposition. May then announced to reporters that the cost of such care would be capped but argued this was not a change in policy. — The Guardian

Iran’s moderates win election, but it won’t matter to Trump (The New Yorker): “For Iranians and the outside world, the stakes in Iran’s Presidential election were not just who holds office for the next four years or the nuclear deal. The outcome will also influence the future direction of the revolution at a time when its original masterminds are aging, ailing, or dying off.”

Damning with deafening praise: why Netanyahu is unimpressed by Trump (Times of Israel): “Both Israeli and Palestinian leaders plan to welcome Trump with pomp and circumstance, lavishing praise on the American leader and pronouncing their full-throated backing for his as-yet amorphous peace initiative. This is not a sign of trust in Trump, but of their calculation that words are more important than substance to the new administration, that this president is best handled as a reality television star rather than a hard-nosed policy challenge.”

Why we lie: the science behind our deceptive ways (National Geographic): “Lying, it turns out, is something that most of us are very adept at. We lie with ease, in ways big and small, to strangers, co-workers, friends, and loved ones. Our capacity for dishonesty is as fundamental to us as our need to trust others, which ironically makes us terrible at detecting lies.”

Facebook promised to tackle fake news. But the evidence shows it’s not working (The Guardian): “A review of false news articles and interviews with fact-checkers and writers who produce fake content suggests that Facebook’s highly promoted initiatives are regularly ineffective, and in some cases appear to be having minimal impact. Articles formally debunked by Facebook’s fact-checking partners frequently remain on the site without the ‘disputed’ tag warning users about the content. And when fake news stories do get branded as potentially false, the label often comes after the story has already gone viral and the damage has been done.”

We should levy Facebook and Google to fund journalism – here’s how (The Conversation): “Facebook and Google have reached almost total saturation of the Australian audience in terms of “active reach” (the percentage of people accessing a particular site or platform). Not only do they have the two largest audiences, but they also soak up the most time spent online.”

Dock officials blame parents of girl dragged in water by sea lion (New York Post): “The dramatic video of the incident Saturday clearly shows the massive marine mammal snapping at the pigtailed tot before she’s allowed to sit down with her back to the beast — which then drags her into the water by her dress, the pier’s general manager told The Post.” 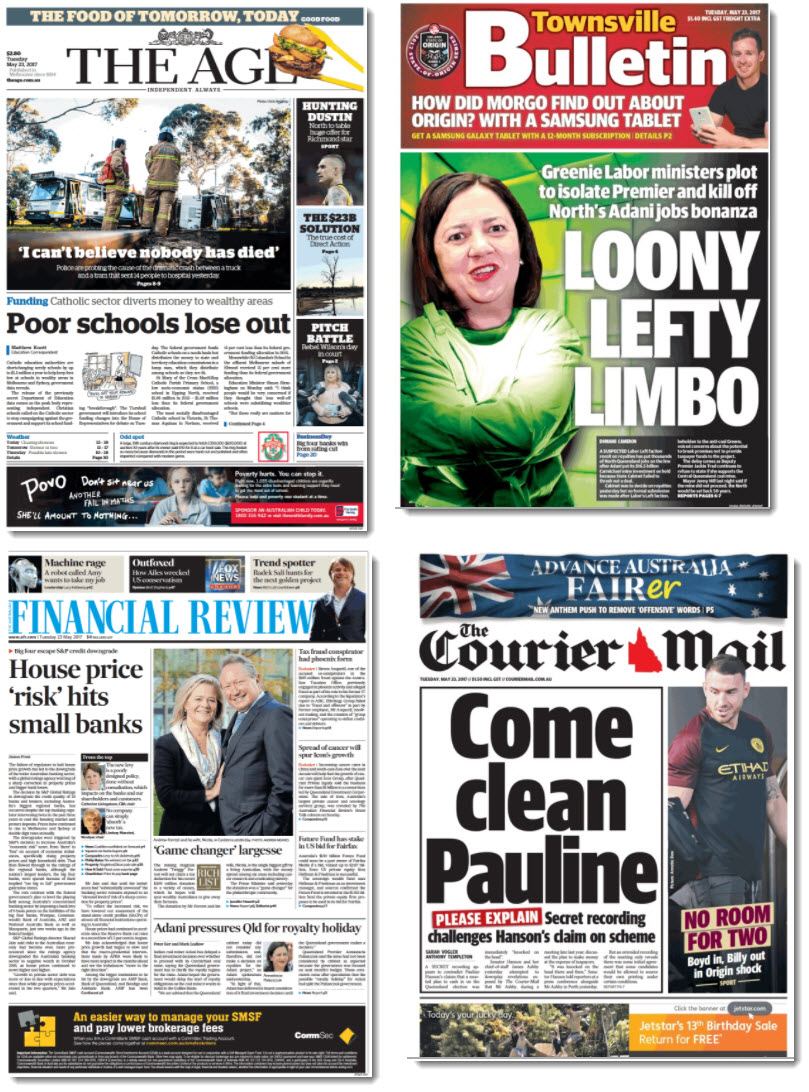