New digital agency head at Lib fundraiser. The new CEO of Malcolm Turnbull’s pet project, the Digital Transformation Agency, has admitted he needs to get better acquainted with rules around public servant impartiality after he attended a Liberal Party fundraiser on budget night just days into his new job.

In Senate estimates today, Gavin Slater said he wasn’t aware that the Liberal Party’s fundraising dinner in the Great Hall in Parliament House on budget night was a party political event.

“It is fair to say I have a lot to learn about obligations,” he said, adding he was invited by a friend — Angus Barker, a special adviser to Trade Minister Steve Ciobo — and didn’t pay for his ticket. Attorney-General George Brandis said that the event had people from “a very wide cross-section of the Australian community” and he didn’t think there was any rule against public servants attending political events.

Ms Tips passed the event on budget night, and the Liberal logo was very hard to miss on the door out front — that’s the Liberal Party logos above where the seating charts were displayed. 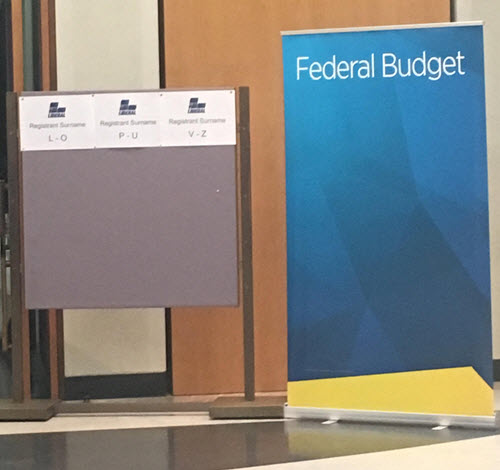 Given some Liberals are chasing Gillian Triggs for daring to speak at an event organised by the Bob Brown Foundation, some might find Brandis’ dismissal of the criticism too cute.

Strange days as Liberals and Catholics go to war. One of the most common tactics used by governments to influence debate over any sort of controversial policy is to drop data, sourced either from within the government bureaucracy or sourced from an “independent” consultant, usually paid by the government or sectoral interests, to a favoured journalist. The data will purport to show how claims being made by the opposition or a sector making life difficult for the government are false and the government correct.

But the government’s surrender on Gonski school funding reform has produced the bizarre sight of a Coalition government handing out such drops to journalists as part of an attack on the Catholic education system. In the Fin Review and the Fairfax metros today, readers found out how the Catholic Church subsidises rich schools ahead of some of the poorest schools in the country. Anyone familiar with the Howard years, when that government opened the funding floodgates to Catholic schools as part of its taxpayer-funded “aspirational agenda”, would be shocked to see the Liberals’ guns turned on the Church of Rome. As would poor Simon Benson at The Australian, normally the Coalition go-to guy for drops. He was left to run a (literally) Howard-era piece on plucky Catholic schools vowing to fight the government.

One Nation quiet on ABC complaints. When the ABC’s Andrew Probyn revealed on Insiders in March that Pauline Hanson was set to visit Australian troops in the Middle East on Anzac Day, the party was furious, as the trip ended up being cancelled for security reasons. Hanson went on to announce on Facebook that she was boycotting the national broadcaster. “You know what I was really looking forward to, is spending Anzac Day with them,” she said.”Good on you Andrew, great one, mate.”

As we revealed at the time, Defence had already put the dates up online, but took them down in a later version of a pamphlet sent to MPs.

But how angry was she really? A freedom of information request reveals the ABC hasn’t received any complaints about the program, so while Hanson had time for a Facebook video, she didn’t actually contact the public broadcaster about it.

House of Reps or The West Wing? Yesterday, Sky News played “name that MP” using footage of Parliament’s less known representatives to test out just how well they knew some of the more camera-shy backbenchers. Tasmanian Labor MP Ross Hart took his inclusion in the segment quite well, tweeting a photo of himself with the caption “Ziegler perhaps?” 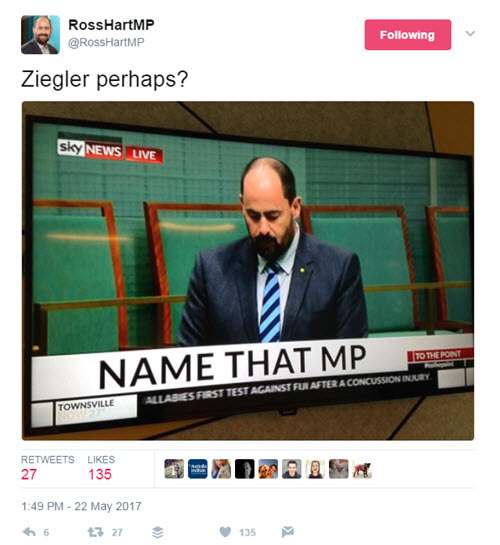 We had wondered if we were the only ones who saw the resemblance with the character Toby Ziegler from The West Wing. Sounds like he’s heard that one before. 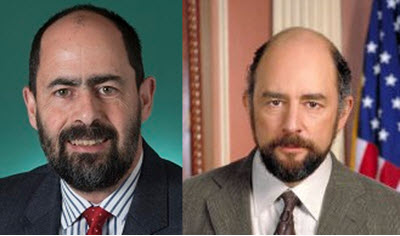 Just the tonic. It was gin o’clock at Senate estimates last night as parliamentary librarian Dr Dianne Heriot was questioned about just how the Parliament House gift shop began selling the “parliamentary librarian’s gin”. Heriot told the committee the idea to sell the gin was her own, while chair Senator James Paterson chimed in to say that he was a fan. The committee heard it’s a good seller, with a following on Twitter. While Heriot said she wasn’t involved in the distilling process, she is available for autographing bottles.

“I thought it was a good idea,” Heriot told the committee. “Because when I’m on holidays I often go to parliaments because I’m tragic in that regard and I noticed that branded spirits often sell very well, and gin was a trending beverage.”

Senator Penny Wong ended the gin speculation by bringing the committee back to more serious matters, asking “what about your resourcing?”.

Unfortunately she meant funding for the Parliamentary Library’s work, not the provenance of the juniper berries.

‘Gullible’ pollies being fooled by the Catholic Church? A former PM thinks so

What better credentials for being picked for the job of “the new CEO of Malcolm Turnbull’s pet project, the Digital Transformation Agency” than not to know a Liberal fund-raiser from a hole in the ground – all those Labor politicians there …..? No interest of conflicts?
….. Guthrie there?
… Did someone say FICAC? …. It wasn’t Labor?

It sounds like drug testing might be necessary in the Parliamentary library, if only to establish a preliminary base line.