What Ashby doesn't know about the law ... Abetz in economy, Wilkie in business ... Twiggy's convenient timing ...

Ashby’s confused relationship with the law. Not since Peta Credlin has there been a chief of staff so much in the limelight as James Ashby. The Courier-Mail reports today that it obtained a recording in which Ashby allegedly talks about how to make money out of the Queensland state election.

Speaking on ABC Brisbane this morning, Ashby dismissed the story, claiming the recording of what he said was a “brainstorming session” was “illegal”. Audio recording law varies from state to state, but in Queensland, as long as the person doing the recording is party to the conversation, it is legal to make a recording. Ashby might argue that it is illegal to then publish the recording, as it has been both in the The Courier-Mail and on the ABC this morning, but there are exemptions on that law if the publication is in the public interest. And the public is very interested.

Spotted. Flying from Hobart to Melbourne last night ahead of the parliamentary sitting week, a Crikey spy spotted independent MP Andrew Wilkie in the cushy seats at the front of the plane in business class. As our tipster moved further into the plane, who should also be there? Liberal Senator Eric Abetz in economy with the everyman.

Watching the Plutus Payroll scandal unfold. While the Australian Federal Police announcement that it had broken open a $165 million tax fraud came as a shock to most of us last week, contractors who were usually paid by Plutus and readers of IT news website The Register would have been less surprised. Journalist Simon Sharwood has been chipping away at the story for almost a month, after Plutus told contractors in late April that its bank accounts had been frozen because of a “dispute”, that it later revealed was with the Australian Tax Office. Over a series of stories, contractors revealed the issues they faced as they hadn’t been paid, and Sharwood wrote this prescient line on May 3:

“One possible reason for the mess is that Plutus did not charge for its services. How it made money is therefore a mystery. Another scenario concerns the company’s recent acquisition: perhaps its new owners are being denied access to some service Plutus could access as a standalone company.”

He also wrote “readers have contacted The Register with worries like whether Plutus has paid their taxes”. Later updates reported Plutus eventually paid contractors but didn’t put money into their superannuation accounts and assured customers things would be getting back to normal, until the AFP went public on Thursday and Plutus contractors finally knew the full story.

On Sunday, the party’s account tweeted a pledge to “retain Easter, Christmas and other Australian traditions”. The accompanying tweet calls for the “march of political correctness” to be halted and uses the hashtag #tcot, which stands for “top conservatives on Twitter”. But given the total absence of any move by anyone — however afflicted by politically correct madness they may be — to abolish Easter or Christmas, Australian Conservatives are, presumably, planning their next move: a call for the retention of the sun rising and setting. 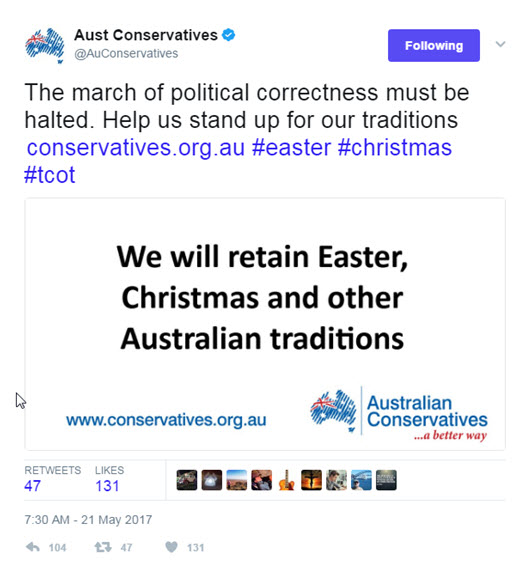 Controlling the conversation. What does it take to get unrelentingly positive coverage just a few days after a long and fairly damning report in the national broadsheet? Roughly $400 million, apparently. This morning, mining magnate and philanthropist Andrew Forrest announced the “single largest philanthropic donation in Australian history”. Prime Minister Malcolm Turnbull called the “extraordinary act” a “game changer” at the announcement in Parliament House this morning, and many politicians took to  social media to praise Forrest. One person who might not join the chorus of praise is Tony Shaw, a former native title negotiator who was tasked with convincing indigenous people in the Goldfields to allow Forrest’s early Murrin Murrin project on their land, interviewed at length in this weekend’s Weekend Australian.

The piece talks of Shaw’s “deep sorrow and regret” for his involvement in negotiating an agreement with Aboriginal elders who lacked legal representation, and who, according to Shaw, received “next to nothing”. The article quotes academic Ciaran O’Faircheallaigh, who describes Forrest’s Murrin Murrin deal as “among the least beneficial” he has seen. O’Faircheallaigh also notes that Forrest’s native title deals “didn’t improve” when he was chief executive of Fortescue. Of course, a large donation of this kind was bound to attract a great deal of attention, and Ms Tips is not so conspiracy minded as to think Forrest could (or would) just get the Prime Minister, the Leader of the Opposition and Russell Crowe into a room to squash some bad press, but Forrest must be glad that the negative story only had a day or so of oxygen before the donation announcement buried it.

Andrew Forrest has many contradictions, but one is getting harder to defend

I’m not sure that Forrest’s donation has managed to bury the story.
By the looks of my twitter feed, it’s just thrown petrol on the flames.
Heaps of snark about just who’s $400 million he “gave away”.

It says a lot about the Perilous Pauline that she would employ Ashby at all. Twiggy, the rent seeking little sod is trying to pretend he’s a nice dude. His workers know otherwise. He has used his family name, as far as I can tell, to get a lot of favours done, including access to rail lines that neither he nor the WA gov’t contributed one cent to.

I thought it was the least Twiggy could do – after the ways he’s profited in the past, and is probably banking on into the future, after this?
What I can’t understand is why this announcement took so much hoopla?

Interesting that Ashby would cry foul considering his previous track record. I am surely what he did to Peter Slipper can’t be forgotten in a hurry.
It’s interesting that Forest & really all of these miners just can’t behave like reasonable human beings, seems odd that he won’t/can’t pay his way in previous projects, but then tries to buy political clout “now.” Slippery as an eel & the powers that be just don’t start asking questions…..