The Cassie Sainsbury scandal deepens, there are Labor cabinet leaks on Medicare levy, and Peter Dutton targets "fake refugees". It's the news you need to know, by Sally Whyte and Max Chalmers.

The headlines just don’t stop when it comes to alleged drug mule Cassandra Sainsbury, with 60 Minutes reporting she was working in a brothel in Sydney under the name “Claudia”. The program also claims her fiance, Scott Broadbridge, is a person of interest in the case. Sainsbury is accused of trying to smuggle 6 kilograms of cocaine out of Columbia’s Bogota airport. Sainsbury now claims she was forced to act as a drug mule by an international syndicate, according to court documents.

Labor leader Bill Shorten ignored the advice of senior members of the shadow cabinet when he announced that Labor would only support increasing the Medicare levy for people with incomes of more than $87,000 a year, Fairfax reports. In a story that James Massola writes is confirmed by three members of the shadow cabinet, the majority of shadow cabinet believed Labor should back the government’s budget measure for an increase on the Medicare levy for everyone. It’s an interesting and rare leak of details from shadow cabinet, with one member quoted saying: “It was a really tough decision and there was a lot of discussion. It was very tempting to take that revenue.”

Immigration Minister Peter Dutton has returned to his favourite punching bag, announcing asylum seekers living in Australia who have not started their applications for refugee status by October face being deported and cut off from government income support. Dutton says there are 7500 asylum seekers in Australia who arrived under the former Labor government who are yet to provide information about their claims, saying the “game is up” for “fake refugees”. Now lawyers are saying the government can expect to face legal challenges to the move. The new anti-boat people push comes just weeks after the federal budget was announced, a time when the the government would usually be focused on prosecuting the case for its budget measures.

BUDGET MEASURES TO BE BLOCKED BY SENATE

Speaking of the budget, the government faces an uphill battle in legislating $14 billion of its budget measures, with the Senate expected to block five measures, according to analysis in The Australian. As Parliament returns today, the paper has surveyed Labor, the Greens and crossbenchers on eight key budget measures, finding that while the 0.06% levy on the big banks is likely to pass, the Medicare levy, higher education reform, Gonski 2.0 and drug testing for welfare recipients are going to face a difficult path. As Senate negotiations have already showed, these positions aren’t set in stone. A note on the table in the paper says “these positions are highly volatile and subject to change”.

“They [TPG] said if I wasn’t interested in staying they weren’t interested in spending any more time looking at the business.” That’s Domain CEO Antony Catalano, in his first interview since private equity firm TPG made an offer to buy Domain and the Fairfax metro mastheads. Catalano said that he had been in contact with TPG Australian boss Joel Thickins before TPG had made the offer. Catalano also said that he hadn’t disagreed with Fairfax CEO Greg Hywood on plans to spin off the profitable real estate arm of Fairfax.

Lindt Cafe siege: Families of the hostages who died criticise police handling of the deadly incident

Canberra: It’s the start of Senate estimates today, with the Department of Immigration and the Energy and Environment Department among those up for questioning by senators today.

Melbourne: Australian actress Rebel Wilson will be in the Supreme Court today in the defamation case she has brought against Australian magazine publisher Bauer Media. Details on the case so far are here.

Brisbane and Sydney: The Queensland and New South Wales sides to take the field in State of Origin game one on May 31 will be announced today.

Be honest about unemployment — it’s above 15 percent — Adam Creighton (The Australian $): “The official national jobless rate fell to 5.7 per cent last week, prompting perfunctory cheers. But the reality is that more than 2.26 million Australians of working age can’t find work, far more than the 732,000 suggested in April’s figures.”

Catholic schools’ campaign against Gonski exposes their Achilles’ heel — Tim Dodd (Australian Financial Review $): “…their complaints about schools being forced to raise fees has no logic. The Turnbull government is going to continue to allow them to redistribute money as they choose. Privileged Catholic schools can remain privileged. The main hurt they will suffer is embarrassment.”

Donald Trump has made his first international visit, spending two days in Saudi Arabia. The US President was greeted warmly by his Saudi hosts, with Trump and Secretary of State Rex Tillerson joining a ceremonial sword dance. The sabres seemed appropriate given they had just sold $110 billion worth of weapons to Saudi Arabia.

On day two of the visit, Trump addressed the leaders of several Middle East and north African countries. In a change of rhetoric, Trump described Islam as “one of the world’s great faiths” but counselled that “if you choose the path of terror, your life will be empty, your life will be brief, and your soul will be condemned”.

APEC members have agree to pursue the Trans-Pacific Partnership Agreement (TPP) without the US after Donald Trump abandoned the US’ commitment to the deal. Moving forward will be difficult given nations like Vietnam and Malaysia were originally drawn to the table by the prospect of gaining greater access to the US. — Reuters

Facebook’s internal moderator rulebook has been leaked to The Guardian. The training manuals indicate that posts such as “I hope someone kills you”, “fuck off and die”, and “to snap a bitch’s neck, make sure to apply all your pressure to the middle of her throat” would not be removed as they are judged too “generic”. A post that said “someone shoot Trump” would be removed, however. The guides also show the company will allow people to stream self-harm on the basis it does not wish to “censor or punish” the distressed person. — The Guardian

After being re-elected as the leader of Iran, Hassan Rouhani has been given a further boost, with sweeping council elections in Tehran. Rouhani stormed to victory in the country’s presidential election, a boost for the troubled Iran nuclear deal. — BBC

Football giant Real Madrid has won the Spanish La Liga competition for the first time since 2012. On the final day of action the club secured the title. It’s the club’s first since former player and headbutter of Italians Zinedine Zidane became manager. — ESPN

The Trump administration talent vacuum (New York Times): “Over the past 10 days the atmosphere has become extraordinary. Senior members of the White House staff have trained their sights on the man they serve. Every day now there are stories in which unnamed White House officials express disdain, exasperation, anger and disrespect for their boss … the staff is jumping ship so fast they are leaving the rats gaping and applauding.”

Syria has effectively ceased to exist (Foreign Policy): “With the regime and rebels now effectively reduced to client status and no great desire on the part of the patrons to commit to absolute victory for their proxies … Syria will be divided between the regime enclave in the west, the Sunni Arab rebels in the northwest and southwest, a Turkish-ensured rebel enclave in the north, an SDF-controlled region in the northeast, and some arrangement involving both the SDF and Western-backed Arab rebels in the east.”

When your child Is a psychopath (The Atlantic): “Samantha later showed Jen her sketches, and Jen watched in horror as her daughter demonstrated how to strangle or suffocate her stuffed animals. “I was so terrified,” Jen says. “I felt like I had lost control.” Four months later, Samantha tried to strangle her baby brother, who was just two months old. 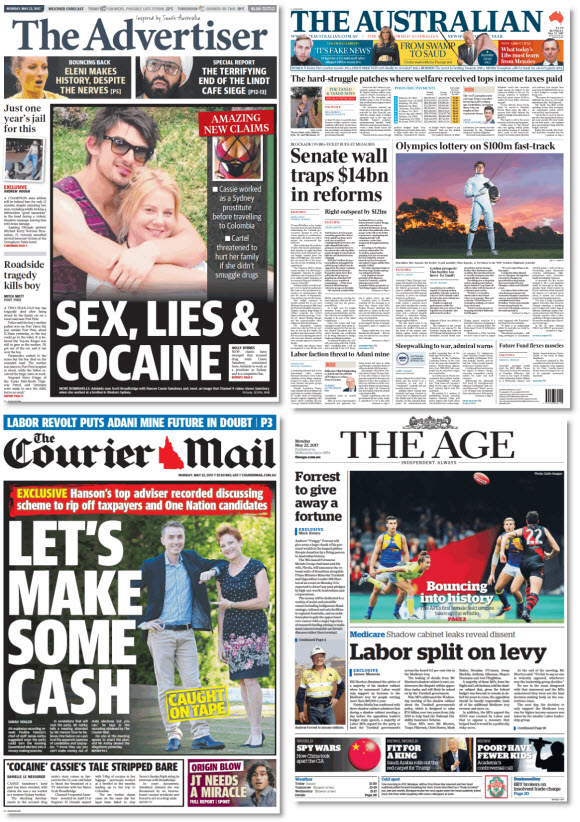 Correction – surprised that I read it wrong:( 75’th anniversary – apologies for my senior moment.