No ads for SBS … Ailes dead … will tweet for pitches …

Murdoch stalwart Roger Ailes is dead. And other media tidbits of the day.

Today in Media Files, the government is to drop its bill that would allow more prime time advertising for SBS, and the controversial former head of Fox News has died.

SBS fight for prime-time ads over, for now. The federal government will drop a bill that would have allowed more prime-time advertising on SBS. The president for advocacy group Save Our SBS Steve Aujard said Communications Minister Mitch Fifield’s office called him yesterday to tell him the bill would be withdrawn. The group has been running a campaign over the past couple of weeks asking viewers to write to their MPs and senators in support of dropping the bill.

The SBS was allocated an additional $8.8 million in the federal budget earlier this month to compensate for the failure of the government to get the legislation up. The bill would have allowed SBS to average out its ads over the day, so it could show more during prime time, when it could charge more.

And the medal goes to … The Australian Press Council’s press freedom medals have gone to two lawyers. Michael Cameron, the head of News Corp Australia’s in-house legal team, and Peter Timmins, a freedom of information and privacy expert. Cameron established the team at News Corp, which has since challenged more than 100 suppression orders in the Australian courts. Timmins is a leader of the Australian Open Government Partnership Network, publishes the Open and Shut blog, wrote a major press freedom report for the Right to Know Coalition and is on the New South Wales Information Advisory Committee.

The medals were awarded at a ceremony in Sydney this morning. Last year, journalists Kate McClymont, from Fairfax, and Paul Maley, from News Corp Australia, were awarded the medal.

Telco moves into newspaper business? Graphics explaining the bids for Fairfax were the way to go for the papers this morning. If you were reading The Australian‘s business section this morning, you might have been surprised to learn from the explainer graphic that Aussie telco TPG was involved in the deal: 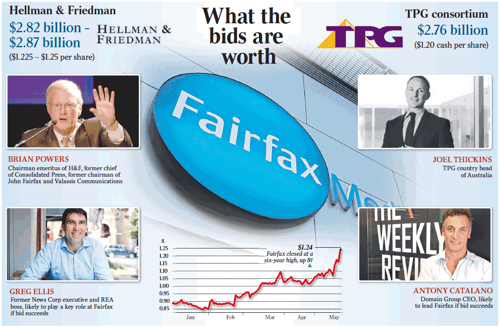 If you read past the pictures, though, or had been following the story, you would have known that the TPG involved in the deal is the TPG consortium, a private equity firm from the US, which shares its name with the telco. For the record, the Fairfax papers managed to track down the correct logo for their graphic:

Controversial former head of Fox News dies. Roger Ailes is dead, long may he live on in the daily rubbish pushed to the world by Fox News and its convocation of right-wing clowns, starting with the man who gave birth to all of this, Rupert Murdoch. For all the tributes to Ailes and his “vision”, one very stark fact stands out: he was a creature that Rupert Murdoch allowed to flourish and infect political debate not only in the US, but throughout the world. The UK and Australia are notable examples because of the poisonous presence of the Murdoch media in both countries, especially print in the UK and in Australia pay TV and print.

US journalist Gabriel Sherman is the unauthorised biographer of Ailes and did much last year to help force him out of his position at the head of Fox News. Last weekend, in an article on the continuing troubles of Fox in the wake of Ailes’ sacking, and that of his No. 1 invention, host, Bill O’Reilly (both men faced a string of sexual harassment claims), Sherman placed the blame squarely on one person: Rupert Murdoch:

The Financial Times reported this morning that the criminal investigation into Fox News and Ailes is now in doubt because of the 77-year-old’s death, just as it was starting to get traction with at least two former senior Fox News executives rolling over to give evidence against Ailes and the Murdochs’ company.

So in death Ailes may have saved Rupert Murdoch’s bacon — again. Just as in life he provided the drive and nastiness to get Fox News Channel off the ground and into close to 90 million US homes. “Fair and balanced” and “We report, you decide” became two driving catchphrases of Fox News under Ailes, and never have two misnomers flourished in the US media more than those two bald-faced lies. — Glenn Dyer

Can you Nazi the problem? Look, I’ve been trying to lay off Helen Dale (nee Darville, briefly Demidenko) because she has been laying into the hypocrisies of some of the right, from the right. But there’s a limit to one’s restraint, and it’s reached when Dale writes an article criticising people for unnecessarily bringing Hitler into the conversation. Yeah, imagine that.

Wait, it gets better. Dale states that the republishing of her “first” novel, The Hand that Signed the Paper, has been something of a sensation, the totality of which appears to be an article in the Oz by … Helen Dale.

From there it gets very confusing. In her pursuit of Hitler analogies, Dale takes a made-up statistic by humorist Alan Coren as a real fact, calls the idea of WWII as a battle against radical evil a “‘Just So’ story”, quotes the original mathematical version of Godwin’s law, and then proposes a modification — “the first person to make a Hitler analogy in a debate loses” — which bloody well is the version of Godwin’s law we’ve all been using for years. And those are just the highlights. You see Dale, as regards stuff she thought of, and stuff that exists, has a tiny bit of a problemette, as multiple plagiarism events in her past attest to. It is not unrelated to her libertarian politics. But, hey, she has book to sell — out now from a press called Ligature. So named presumably, because “Enough Rope Books” was already taken — Guy Rundle

On shaky Grauniad. The battle of private equity firms for Fairfax has yielded a stern battle cry from one quarter:

Good idea. Perhaps The Guardian, with its global reach and networks could commission something? Maybe from Melbourne, still the centre of Australian capital?  Who is the Melbourne editor of The Guardian Australia? That would be Gay Alcorn.

And a very good editor and writer she is too. But what is The Guardian Australia, when its second-city editor has to bleg for articles to be written? Answer: there is no Guardian Australia, and everyone knows it. There’s an Australian bureau of a British newspaper, which inserts a few stories into the British edition. Maybe some of its bewilderingly large number of staff could be put onto this? –– Guy Rundle

Despite that, the two versions of The Footy Show continue their slow on air death. While they are winning their time slots — 8.30pm in Melbourne for the AFL version and 10pm onward on Nine in Sydney and Brisbane for the NRL program — the audience sizes are a shadow of former figures, and reflect just how much viewers have tuned off free to air TV, especially on Thursday nights.

Over on the ABC Seven Types of Ambiguity ended last night on just 355,000 metro viewers and 517,000 nationally. The Checkout at 8pm is doing fractionally better — 481,000 in the metros, and 710,000 nationally — but still far from impressive. Masterchef was the most watched non-news program with 935,000 in the metros and 1.26 million nationally. At least Ten kept faith with the programs fans, unlike Seven, which ran dead as a doornail, and Nine, which rested on the NRL and the AFL Footy Show. The breakfast wars maintained the usual usual dynamic — another solid metro win for Today, another easy national win for Sunrise (543,000 to 460,000).

A great read. A friend of mine in the U.S. gave his amicable 72 year old uncle a subscription to Fox News a few years back. He tells me since then his uncle has become a committed evangelical, watches Fox News as often as he can; nowadays hates and distrust every one, even members of his family who do not accept the Fox News as the absolute truth.

Re the AFL Footy Show – we and most of our friends here in Adelaide much prefer to watch the Marngrook footy show – it is far more entertaining and has much more interesting and knowledgeable guest commentators than the other free-to-air shows. We would be interested to know how many viewers the show has?

One small consolation fro the baleful effect Ailes had on news presentation is that he didn’t live long enough to wallow in his $40M golden parachute.
Pity about those longevity genes the mudorc seems to have inherited from his sainted mother.