Today in Media Files, children’s newspaper Crinkling News has raised enough money to keep printing, just in the nick of time. And Miranda Devine thinks Behind the News is turning kids into terrorists.

Crinkling survives. The children’s newspaper Crinkling News has hit its fundraising goal, with just hours to spare. The paper was due to close if it did not raise $200,000 by the end of today, after it ran out of its seed funding.

Editor Saffron Howden told Crikey she only started to feel optimistic about reaching the goal last night as pledges were still coming in. “We’re incredibly grateful and excited and glad that Crinkling News is going to keep publishing,” she said.

Crinkling launched just over a year ago, but announced two weeks ago it would be closing if it could not find the extra money. Howden told the Select Committee on the Future of Public Interest Journalism yesterday the funds would make the business sustainable, and she did not expect they would need to do further fundraising.

Poison pens. Miranda Devine was clutching at straws in her Daily Telegraph column yesterday in trying to say an ABC kids’ show is turning children into terrorists. Under the headline, “Behead the News”, Devine goes after the ABC’s children’s news program Behind the News (“the kiddies’ version of the Green Left Weekly” as she puts it) for stories it ran three years ago. She quotes one teacher from Punchbowl Public School in Sydney, named only as “Mrs A”, saying that in 2014, BtN aired stories that were sympathetic to Islamic State, which riled up her students in grades five and six. “They were brainwashing the kids,” the teacher reportedly told Devine.

An ABC spokeswoman told Crikey the ABC had not received a single complaint about BtN stories in 2014 being sympathetic to the Islamist group.

“Any suggestion that BtN has run stories sympathetic to IS are nonsensical and offensive,” she said.

Hywood’s selective memory. Fairfax boss Greg Hywood either has a conveniently short corporate memory, or is just another overpaid executive hypocrite blaming everyone except themselves for the decline of legacy media. Speaking yesterday during the silly, cobbled-together pantomime of the Select Committee on the Future of Public Interest Journalism, Hywood attacked the ABC for “using taxpayer money to drive traffic” to its news websites. This, he claimed, was harming traditional newspaper companies.

Hywood has clearly forgotten that for more than 40 years Fairfax was happy to take millions of dollars of ABC money for display advertising to promote the national broadcaster’s television programs — exactly the same type of expenditure he now decries as unfair. And he’s also clearly forgotten the more recent practice of Fairfax (while he was at its helm) of halving the cost of some of its “public interest” journalism by undertaking joint investigations with ABC staff, notably Four Corners and 7.30. No problem with enjoying the benefits of “taxpayer money” back then. — David Salter

Ten’s value drops again. The market value of the Ten Network continues to shrink. The company’s shares took a big hit in yesterday’s 1.1% slump in the ASX 200 and will come under more pressure with another big slide forecast for today after Wall Street finally broke and sold off as investors finally realised that President Trump was an incompetent.

Ten shares fell 2.6% to just 21.5 cents at the close (and a day’s low of 21 cents). That’s 2.15 cents before the one for ten consolidation last year. At that level, Ten is valued at just $77.8 million, which if maintained for the next few months, will force another massive impairment loss on the company (and on big shareholder Foxtel).

Ten’s shares could plummet even further if the government’s media law changes are delayed or rejected in the Senate, with Pauline Hanson arcing up about the nasty ABC. She wants the government to punish the ABC for asking tough questions of her and her stumbling party — specifically Insiders host Barrie Cassidy and the Four Corners program which exposed questions about an aircraft. If this legislation is rejected, Ten will move much closer to being placed in administration.

Front page of the day. There are some things you really will only see in the NT News. You can read the full story, based on a survey by the Australian Women’s Weekly, here. 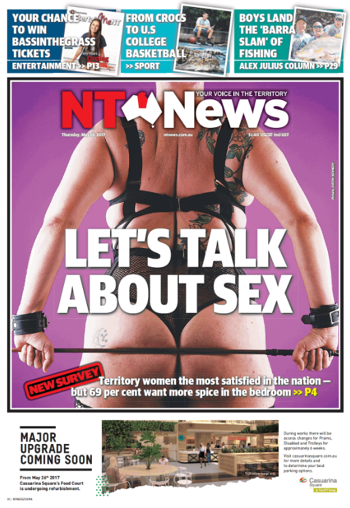 Glenn Dyer’s TV Ratings. A good night for Seven and House Rules, but a bad night for Nine and The Last Resort, which was again the black hole in the network’s prime time schedule — 519,000 national viewers, the lowest figure so far for the show. Now, the figures for Britain’s Got Talent — 716,000 nationally — were nothing to boast about, but they were substantially better than The Last Resort and underline the audience response to the program. They just don’t like it, and it seems Nine are not getting the message. Or it is that Nine has nothing in its program bank to replace it?

MasterChef was solid for Ten, in front of Seven’s House Rules in the metros, 958,000 to 807,000, but nationally that was reversed with House Rules on 1.39 million people and MasterChef managing 1.24 million. That was due to the strong regional performance by House Rules: 591,000, more than double the 287,000 who tuned in to MasterChef.

I don’t think Hywood forgot the ABC money coming to Fairfax at all, but your piece enables me to make sense of his remarks, Mr Salter! I didn’t know about these ABC-Fairfax financial links and was bemused by Hywood’s gibberish about not understanding why, “the ABC is taking money out of the system”. All is now clear(ish) – I still don’t know what “the system” is but, whatever it is, Fairfax must be in it.

Miranda isn’t hesitant to (try) to brainwash adults. Although with the DT’s audience, she’s preaching to the choir, somewhat.