The Good Food Guides will now be one edition, Aldi gets a bunch of free advertising. Plus other media tidbits of the day.

Today in Media Files, the Melbourne, Sydney and Brisbane Good Food Guides will be consolidated into a single national edition, and Aldi bags itself a load of free advertising.

Good Food Guides lose local editions. The Good Food Guides of Sydney, Melbourne and Brisbane will be consolidated down into a single national edition. The Age‘s guide had been running since 1979, and The Sydney Morning Herald‘s since 1984. The Brisbane Times edition launched in 2015. Fairfax is spruiking the change as win for readers because it will now cover all capital cities and more regions, including South Australia’s Barossa Valley, Western Australia’s Margaret River and Tasmania’s King Island.

When Fairfax announced it was cutting resources in a bid to save $30 million a year from its costs at the metropolitan newspapers, it issued a five-page memo to staff saying it would reduce state coverage, try to find more widely appealing stories and strip back its staff in lifestyle areas, relying more on freelance and agency copy.

The PR agency promoting the story of the new and improved Good Food Guide told Crikey the same number of staff would be working on the new edition, and the decision was not related to Fairfax’s cuts and change of direction at its newspapers.

Plugs for Aldi. Aldi has managed to bag itself loads of free publicity for the reveal of its new slogan. News.com.au ran a “rare interview” with with Australian CEO Tom Daunt after a tour of the Waterloo store to reveal that wait times were no longer a issue. Daunt also spoke to Fairfax for its one-source story about Aldi’s place in the supermarket wars. Over at Nine News, Ross Greenwood covered the story too, including yet another of those rare interviews with Daunt and a visit to a store. Greenwood’s colleague over at A Current Affair Reid Butler also gave Aldi’s “upmarket” move a full 10 minutes last month. Aldi has changed its slogan for the first time since 2001, to “Good different”, which it is pushing in a new ad campaign.

Video of the day. In the second episode of Huge if True, Penny Wong has been attacked by a rabid sheep! Click here for more details. 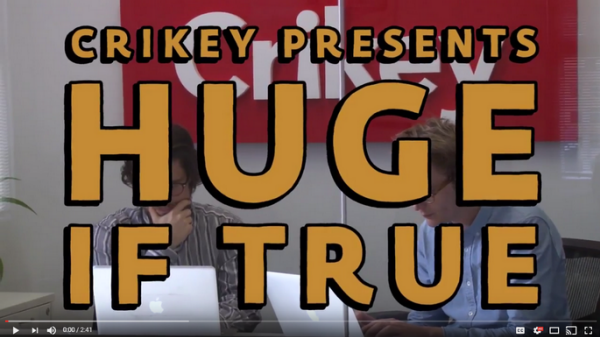 How to conduct interviews, according to A Current Affair. You could say A Current Affair’s reporters have a particular style of doorstop interview. When approaching the targets of their stories — who are most often quite hostile — their questions are crafted to be included in the final cut. The expectation is always that you won’t get a quote from the subject, so you need to get your own loaded questions on tape. Last night, reporter Steve Marshall told us about former pharmacist Minia Attia, who lost his licence after he was accused of selling counterfeit viagra to a hospital. According to Marshall’s report, Attia has since been working as a faith healer while also studying Christianity. When approached outside his house, Attia’s only comment was to ask ACA to leave him alone. So it was over to Marshall, who, in quick succession, asked: “When God spoke to you did he tell you to buy counterfeit viagra?”, “Are you in the business of healing or are you in the business of hurting?”, and, referring to Attia’s Masters thesis on prophets, “Is it prophet with an ‘et’ or an ‘it’?”. You can watch the story in full here.

AFL and NRL codes dominate online sports viewing. Data from the TV, radio and digital ratings group Nielsen for March show how clearly Australian rules football and rugby league dominate online viewing and social media, with Telstra’s websites devoted to each code accounting for about half the 11.2 million in total visits to websites looking for sports content.

The Nielsen report was released at a sports conference yesterday run by the Interactive Advertising Bureau for the start of the 2017 season for both football codes. On top of this, while desktops still dominate online traffic to sports websites (indicating many come from workstations), smartphone access is growing much faster, along with tablets.

Nielsen said its monthly digital ratings for March showed 11.2 million Australians visited online content related to the sports category via any device, up 8% compared to February 2017.

Nielsen said males account for more than half (56%) of all Australians who visit a sports-related content, and those visits were up 13% in March compared to the previous month, compared to just 2% for women.

And the top five sites and apps in the sports category (ranked by unique audience) all reported strong, double-digit growth in March compared with the prior month. Telstra Media’s AFL website reported 3.4 million (up 68%), ESPN Digital Network 3.3 million (up 63% and solely due to the controversial four test series against India in India), Telstra Media’s NRL 2.2 million (+69%), Fox Sports 1.9 million (+36%) and Cricket Australia 1.7 million (+14%, again solely due to the Indian test series). The two Telstra sites accounted for half the 11.2 million uniques. Note that the newspaper websites such as news.com.au and The Sydney Morning Herald and Melbourne Age are not mentioned.

More interesting though was the data for social media where Nielsen said sport was “the most active genre” in March (and the NRL far more discussed or mentioned than the AFL) with “one in every two social media interactions was about live sport”. According to the report, the total Facebook and Twitter interactions for each code for the month of March were: NRL — 2 million (Fox League/Nine); AFL — 1.2 million (Fox Footy/Seven) and Formula One — 418,000 (Ten/FoxSports506). — Glenn Dyer

Glenn Dyer’s TV Ratings. What is Nine thinking? Why would they keep a nasty, emotionally exploitative show like Last Resort on TV after its flop of a debut last week on Tuesday and Wednesday nights?

It was fourth nationally, just in front of the SBS program, a repeat of Great Continental Railway Journeys which got 493,000 viewers. It didn’t help the ratings for Love Child –– which fell from 805,000 nationally last Tuesday to 685,000 last night. That’s the sound of a good TV show dying on air — 2017 is one season too long, killed by programming ineptitude by Nine. Combine that with the absence of The Voice and it was a very weak third place last night for Nine. MasterChef (1.40 million national viewers) looks like high class entertainment in comparison (to Last Resort and Seven Year Switch), as does House Rules (1.381 million). Up against those, Last Resort took a real drubbing as the viewers thought the same way.

Well it seems the Age good food guide is finally toast.
(I’m surprised they didn’t blame the food bloggers.)
Still, I’ll now be able to decide if it’s worth a quick fly/drive to Margaret River or the Barossa for brunch.