The recent ABC Four Corners program “Power Failure” by Michael Brissenden began inauspiciously: “By any measure Australia is an energy superpower. We’re the world’s largest exporter of coal, we have abundant sources of renewable energy and by 2020 Australia will be the largest exporter of liquefied natural gas. And yet, this apparently lucky country is […]

When I tell you that our roads are used by cyclists, cars and skateboarders, you probably have a good idea of the relative share of the traffic of each. And everybody would pick quickly that I missed trucks entirely. But almost nobody has any idea of the relative share of the energy system of the sources named; and the rest of the program failed to enlighten them. And I wonder, did anybody spot the energy export more than twice as big as liquefied natural gas that didn’t rate a mention?

According to the Australian Energy Update 2016, our total energy consumption in 2014-15 from renewables was 343 petajoules. A petajoule (PJ) is a large unit of energy. Most people are at best familiar with kilowatt-hours (kwh) from their electricity bills. A PJ is a rather large energy unit being equal to some 277 million kwh.

For comparison, our oil, coal and gas energy consumption was 2237, 1907, and 1431 petajoules respectively; and our energy exports were 13,088 PJs (mostly coal). Of the 343 petajoules from renewables, 186 were from biomass, and 48 were from hydro. Biomass might be renewable, but it isn’t necessarily low-carbon, and wood smoke has all the same toxic pollutants as cigarettes; it’s filthy stuff. Of the 343 PJs, wind came in at 41 and solar photovoltaic (PV) at just 21. People see solar panels on roof tops and don’t understand what a small piece of the energy puzzle they are looking at. Speaking very roughly, household electricity consumption is one-quarter of all electricity consumption, and electricity is one-quarter of all energy use and almost all energy use is from fossil fuels. Electricity certainly generates a disproportionate amount of CO2, but we have to solve the whole climate problem, not just the easy bits. 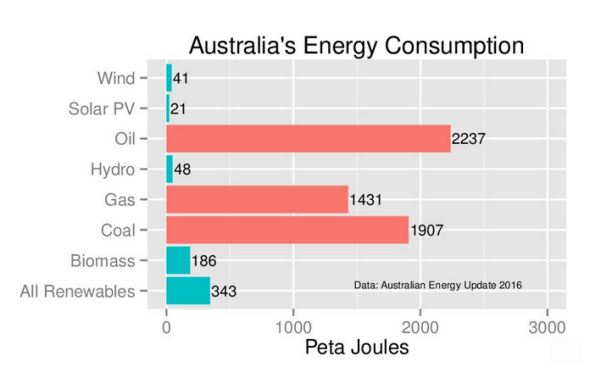 The other thing Australians, in particular, need to keep firmly in mind is that energy is not the be-all and end-all of our decarbonisation needs. We have more cattle than people in Australia and their methane will generate more warming over the next 20 years than all of our coal-fired power stations. And then there’s the land cleared, or kept cleared, to graze them.

In summary, wind and solar PV featured heavily in Brissenden’s story, despite only being worth 41 and 21 PJs respectively. And what of uranium? Remember uranium? Four Corners forgot it entirely.

The elephant in the room didn’t get a mention

We only produced 6110 tonnes of uranium in 2014-5, rather less than than the 67 million tonnes of coal we burned or the 392 million tonnes we exported. But what’s 6110 tonnes of uranium oxide in PJs? About 2592 PJ according to the Energy Update. That’s right, 123 times more energy than solar PV. But not all PJs are equal. Burning stuff produces around two PJs of heat for every one PJ of electricity. That’s not because engineers are incompetent, it’s a consequence of the laws of thermodynamics. Smart people use the heat for heating (fancy that!), desalination, or other industrial processes.

So if you used the uranium for electricity, rather than heat, then you can cut that 123 down to about 40. Meaning that our 6110 tonnes of uranium exports would produce about 40 times more electricity than our solar PV — plus a lot of heat.

A solid investigation of our energy problems would at least have have asked the obvious question: “Why don’t we use our uranium instead of just exporting it?”

So the Four Corners program began with a glaring omission.

Lakeland solar farm and other toys

Considerable time was devoted to the Lakeland solar farm without pointing out how tiny it is; it’s 10.8 megawatts (MW). The fact that it looked massive on the program is just because solar energy harvesting uses large amounts of land to harvest very little energy.

Brissenden interviewed Lakeland’s Christopher West who claimed, “What we’re creating is a base load power generator”.

A five-second look at the Lakeland specs (as reported to the Australian Renewable Energy Agency) shows that his claim is false; not just exaggerated, but false. Lakeland is 10.8 MW solar farm with a 1.4 MW/5.4 MWh battery. A 10.8 MW base-load power station would provide 10.8 MW continuously for every hour in the day; maintenance notwithstanding. When the sun stops shining on the Lakeland solar panels, it won’t provide 10.8 MW for any hours — not one. But if the battery happens to be full, then it could provide 1.4 MW for about four hours.

Clearly, talk of this being base load is a load of another sort entirely.

And then there’s the blackout

Think about a person riddled with metastatic tumours and weakened both by the tumours and large doses of chemotherapeutic drugs. When influenza finishes them off, how do you describe what killed them? The immediate cause of South Australia’s September 2016 blackout was the automatic shutting-down of the Heywood Interconnector when it needed to cover the loss of 456 megawatts of wind. The Australian Energy Market Operator (AEMO) has been worried about the stresses to the interconnector caused by renewables in SA for years. A 2014 renewable integration study wrote:

At the time of the blackout, the two interconnectors were supplying 613 MW of the 1826 MW demand. The wind farms weren’t delivering; they’d slowed down because it was too windy. One hour before the blackout, they’d been supplying almost 1200 MW and within the space of 20 minutes, this slowing down had dropped the power supply by 340 MW to just 860 MW causing the interconnectors to make up the shortfall. This meant it was loaded well above the 250 MW safety limit. AEMO responded by dispatching more gas to try to reduce the interconnector flow. What does this mean? It means they were trying their best to implement their policy of leaving enough capacity on the interconnector to cater for the unforeseen.

This is similar to not travelling too close to the car in front because something might cause that car to brake suddenly. But the unforeseen happened before the interconnector had enough capacity to handle it. The graph below shows the kind of large wind variability that the AEMO had to deal with on that day. 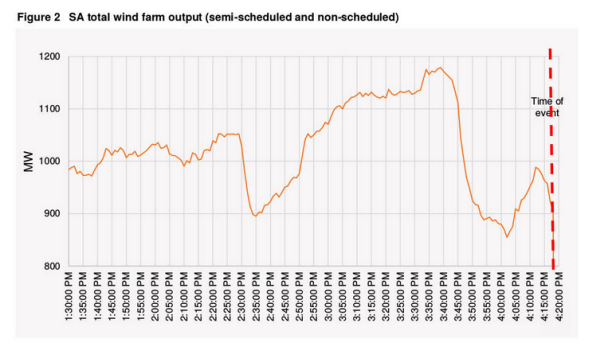 A European study in 2014 found that 100% renewable systems need interconnectivity to be increased by a factor of five to 10 to optimally shunt power from where it is to where it is needed. This is precisely because of the huge swings that must be stabilised by allowing increased flows.

The maximum efficiency in coal power plants is around 50% (it’s much the same as with humans in converting food to work, the rest going in heat). It’s true that with the laws of thermodynamics the only way of making chemical equations go to the right (burning food or coal) is to release heat, a lot of heat, as exothermic reactions.

The world best efficiency in coal power plants is around 40%.

Richard Muller has noted that the efficiency of nuclear power plants is only around 2%. Most of the energy is left in the nuclear waste, which then decays very slowly over many thousands of years requiring to be stored for that length of time.

The 4th generation nuclear reactors (the development of which was canned by Clinton/Gore) promised to be much more efficient, producing much less waste, of shorter half life, requiring to be stored for centuries, which is currently possible to do.

If somehow the efficiency of nuclear could be got up to that of coal, the present reserves of uranium would last much longer. Although its price would be so low, it wouldn’t be economic to mine it.

Thank you Geoff. It is a shock to realise that for all of our big talk about “reductions” with renewables, that we have achieved almost nothing at all. Yet it is during the lifespan of today’s ankle biters that we must eliminate all of our carbon usage.

That is, we must completely replace all of our usage of coal, oil and gas with carbon-free energy. Although it is fashionable (at least in the ABC) to equate carbon-free energy with “renewables”, would better serve our duty to the ankle biters to instead say, “renewables and nuclear“.

There is a difference between a science writer and a scientist. I have seen a number of reports of solar preventing load shedding in hot weather. What the writer does not say, is how the reserve power stations had not done their job by failing to be available without informing the regulator, selling off their gas reserves and generally seeking to manipulate the price. Then there is his claptrap about rangeland cattle when nearly all the research comes from lot feeding. Perhaps he can eat the rangeland grass himself. Crops don’t grow there. Our energy needs can only be met by an integrated system which the LNP government has refused to address lest a renewable energy plant bite it. I often wonder if nuclear has a role, but the lead time is massive and it would have to have a huge amount of water, ie be where there is already a city. Much of this article seems to be a barrow pushing blather.

There’s not much problem with acquiring an adequate supply with nuclear power plants. Just put them on the coast, like Fukushima. There’s plenty of water in the oceans.

Strange logic is used in this article. That as renewables make up 6% of entire energy use and 14% of electricity use currently then they obviously can not provide the solution to a post carbon energy world. Therefore nuclear must be the answer as there is abundant embedded energy in uranium. Does the same logic suggest that as nuclear makes up 0% of Australian energy production that it is even less likely to provide solutions in a post carbon world?! He mentions pollution from wood smoke, then by extension is trying to insinuate the nuclear is safer and healthier than renewables? He mentions some technical issues with renewable energy storage and security, but fails to touch on back-up plans when one or more nuclear generators is ‘down’ for repairs or safety. I’m sorry, but no matter how enthralled the author is with the mystic of nuclear energy, this is not going to magically make nuclear energy affordable nor the nuclear waste problem solvable.

No one wants a nuclear power plant nearby, therefore nuclear is not a viable solution. You can publish all the figures you want but you are still talking about putting a controlled nuclear fission reaction somewhere in Australia.