ATO website problems ongoing. We hear that the Australian Tax Office has had yet another crash — which, as readers will know, is not exactly a new phenomenon, but for many tax agents, the website problems couldn’t have come at a worse time. This time, the problem, reported to us by several tipsters, seems to have largely affected the practitioner lodgment service, the primary channel for tax agents to lodge returns electronically. Worse still, May 15 was the due date for various 2016 tax returns. An ATO spokesperson told Crikey that “any tax agents, and their clients, unable to lodge during this disruption to services will not be disadvantaged.”

Tell us again how there are no factions in the Liberal Party. Former Kevin Andrews staffer Nick Demiris has been handed the job of deputy campaign director for the Victorian Liberals, just over a week after he lost his preselection challenge to Liberal stalwart and Legislative Council president Bruce Atkinson. Demiris is from the conservative wing of the party, and strongly aligned with the Victorian president Michael Kroger, who only kept his job without challenge this year when Peter Reith suffered a stroke in the lead-up to the party vote. In the absolutely completely non-factional tallying of who gets what jobs within the party, does that mean someone aligned with the party’s parliamentary leader Matthew Guy is next in line for a powerful job?

Who is the Mocker? The Australian has unleashed a new anonymous column upon the “sanctimonious attention-seekers”. “The Mocker” was awoken by Anzac Day (that clarion call to all culture warriors) to be irritated by anything anyone slightly progressive said on social media, before turning their withering gaze to the plight of accused Australian drug smuggler Cassandra Sainsbury and the “mug lair act” of Labor Senator Sam Dastyari. Why — given that the content (so far, at least) has not strayed far from the standard “grumpy at young people and lefties” line that marks much of the Oz’s commentary and hasn’t contained much in the way of “insider info” — is this scribe choosing to remain anonymous? There’s a Twitter account as well, with the banner photo of race discrimination commissioner Tim Soutphommasane, in case we were at all wondering just who the column would be targeting. 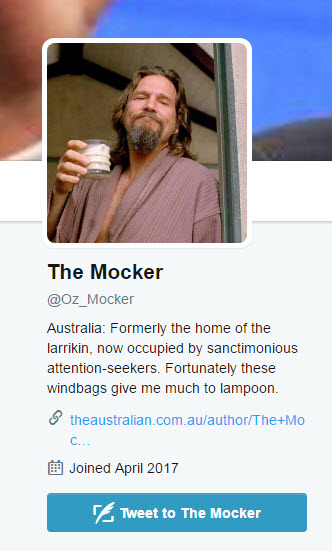 On a Shorten leash. A curious tipster pointed out to us that, having looked at Opposition Leader Bill Shorten’s website, the domain name registrant was none other than Shorten’s old employers: the Australian Workers Union. We asked Shorten’s office why that was, and whether that meant the AWU had any ongoing involvement in paying for or maintaining the website, and got the following response: “This conspiracy theory has been floating around the internet for the last few years. The site was originally registered back in 2006 by the AWU. But Bill is the current registrant/owns the site/pays the bill. It has nothing to do with the AWU.”

Exclusive watch: Fin v the Oz. As Crikey has long reported, The Australian is never shy about describing its stories as exclusive. But this morning it crossed a line, at least in the eyes of Fairfax’s Heath Aston, who pointed out on twitter that the Oz had labelled its interview with National Australia Bank chairman Ken Henry as exclusive, despite an interview (this one with Laura Tingle) with Henry also appearing on the Fin‘s front page. Crowe replied to Aston’s tweet swiftly, saying “Apologies. No idea how that ended up on the page. At no point did I say it was exclusive. I knew @latingle  had also done an interview.” The story has since had its “exclusive” tag removed on The Australian‘s website. 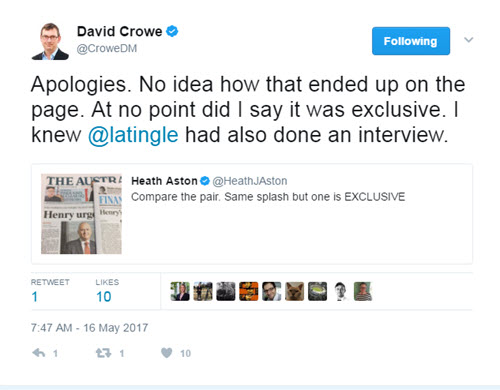 Let me re-write that for him.
The Australian, formerly the home of the larrikin, now occupied by sanctimonious attention seekers like Andrew Bolt, Miranda Devine, et al.

The mudorc’s national shit sheet should be renamed The Exclusive for all the relevance it holds for 98% of the population excluded.