To the extent that abortion’s technical status as a criminal offence remains, it's clearly the case that the law is running behind public opinion.

It hasn’t been a great year for the cause of abortion law liberalisation, with reform bills foundering in the two states where abortion remains on the books as a criminal offence.

First came Queensland, where a bill to remove it from the criminal code was put on the backburner in February after the Liberal National Party opposition resolved to vote against it, rather than allow a conscience vote as Labor was doing.

Then last week, the New South Wales Legislative Council voted down a Greens-sponsored bill that would have decriminalised abortion, compelled medical practitioners to refer patients elsewhere if they had a conscientious objection, and established exclusion zones around clinics to exclude protesters.

The prospective impact of these proposals should not be overstated — legal precedents ensure that abortion is lawful in these states where a doctor considers it necessary to preserve a woman’s physical or mental health, which represents a rather low hurdle in practice.

Nor was the New South Wales bill defeated in a spirit of pro-life absolutism, with speakers against it (and even some in favour) mostly critical of the way the Greens had gone about it.

Nonetheless, the vote followed the contours of liberal and conservative opinion in the chamber, with opponents including the two members of Fred Nile’s Christian Democratic Party: David Clarke, the once-formidable leader of the Liberal Party’s hard-right faction; and, on the Labor side, Greg Donnelly, a former official of the socially conservative Shop Distributive and Allied Employees Association.

[Case closed: experts loudly back decriminalisation of abortion in Qld]

It also followed the re-introduction by Fred Nile of “Zoe’s law”, a contentious bill to grant legal rights to foetuses that made it through the lower house on a conscience vote in the previous term of Parliament, before the government allowed it to die on the vine rather than progressing it through the upper house.

While not targeting abortion, this bill is fiercely opposed by pro-choice groups, who view it as the thin end of the wedge.

To the extent that abortion’s technical status as a criminal offence remains, it’s clearly the case that the law is running behind public opinion.

This is illustrated by the chart below, showing responses to a survey question on abortion featured in the Australian Election Study series, which the Australian National University has conducted after each federal election over the past three decades. 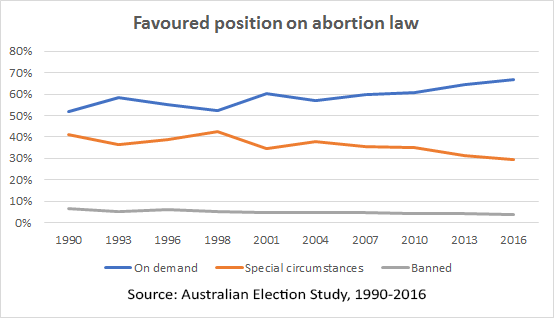 Support for an outright pro-life position has always been limited to the ideological margins, while backing for abortion on demand has grown steadily at the expense of the view that special circumstances should be required.

After last year’s election, 67% indicated support for abortion on demand, compared with 30% for special circumstances and only 4% for an outright ban (by way of comparison, a similar survey in the United States recently had the respective numbers at 46%, 41% and 13% overall, and 26%, 53% and 21% among Republicans).

This is partly reflected by the long-term decline in religious observance, with the proportion of respondents who attended services at least once a month falling from 23% in 1990 to 17% last year.

But whereas the religiously observant have been fairly stable in their conservatism over that time, the steadily increasing share of the population that attends services less than once a month has grown more liberal, with support for abortion on demand increasing from 61% to 75%.

Of still greater interest is a pattern over the past decade in which the observant have grown more pronounced in their identification with the Coalition rather than Labor, with the gap reaching a new peak of 52% to 25% in the 2016 survey.

This has been reflected in the increasing assertiveness of religious conservatives at the grassroots level of the Liberal Party in recent years, and the resulting growth of their influence in party preselections.

It also suggests social conservatives may chalk up more legislative victories in years to come, or, at the very least, hold back the seemingly inexorable liberalising tide of public opinion. 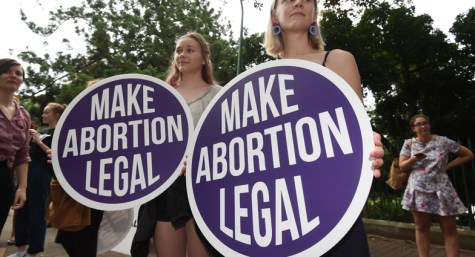 Can it ever be ethical to let women die?

Perhaps a prosecution of parties to an abortion should be tried. It is unlikely that a jury would convict. I am sure that abortion goes on in NSW and Queensland- and i am sure that the usual picketers know where they are.

Has been done, in other states at least. Didn’t lead to law reform. Politicians are vastly removed values-wise from most in society on ‘moral’ issues.

This doesn’t lead to law reform, the reality the right to lifers need to actually try to understand the nature of why these women are forced into having to go to this extent to manage a situation that really there needs to be better research & development around contraception. I also think that the problem we have with people like Fred Nile, they are so out of touch of the reality that these women, couples & families are making choices in often very difficult circumstances. I have noticed there have been right to lifer’s hanging around hospitals that don’t do abortions, since the exclusion zones have come into place around known clinics that perform terminations, they need to be given a limit as to where they can go, and realise that they cause a lot of stress for people that are already dealing with enough.

Can you point me to links on this result “Of still greater interest is a pattern over the past decade in which the observant have grown more pronounced in their identification with the Coalition rather than Labor, with the gap reaching a new peak of 52% to 25% in the 2016 survey.”
j.quiggin@uq.edu.au

The Queensland case really annoys me, a cabinet full of women and they didn’t struggle to legalize abortion. They didn’t legalize abortion despite most people being fine with it being liberalized. Liberalizations that are widespread and done decades ago in other places. How spineless can you get?

I think that Queenslanders live in a similar state as middle America, they are probably more concerned with the backlash from the god botherers than actually fixing something that has needed fixing for so many years.
This is the problem we have with politicians, many of them lose sight of what they’re actually supposed to be doing, whether it be state or federal.

It is a truly appalling comment on our society that abortion should ever be sought for any reason other than medical emergency.
I am so glad that the pro-choicers fund so lavishly top end nursing homes, free child care and other assistance for the children of reluctantly pregnant women.

AR I’m not quite sure what your smoking, but was this an attempt at sarcasm?
You are obviously a man, because no women with any sense would express such a comment.
I am sorry but it is always easier to be an armchair critic, who actually hasn’t had to make such a difficult decision, they aren’t made lightly, but the reality is this is the first time in history women aren’t dying in huge numbers from birth/pregnancy related interventions. So the only thing that needs to catch up is the law, & those people who feel they need to make decisions for others need to learn that the world isn’t flat anymore, and if they don’t like something well that’s their problem.

In QLD, legalising abortion came up a few times when Anna Bligh was Premier.

When she was younger, liberalising abortion was a heart and soul issue for her. When older as Premier and able to use her position on this issue, she lost her heart for taking on religious conservatives, and lost her soul.

Assuming that she ever had a soul, given her current job as flack for the banks.