Turn up the AC. Cory Bernardi has already taken over the Family First party in his quest to make his Australian Conservatives party a big player in the hard-line, socially conservative niche of the political market, but it looks like his Crusades are not over. In an email to members shared with Crikey, the Australian Christians Victorian state director Jeff Reaney revealed that they are also considering merging with Bernardi:

“In last month’s newsletter I shared about the possibility that AC might merge with Cory Bernardi’s Party, Australian Conservatives. I and members of our State Executive are meeting with Cory in Adelaide next Wednesday to explore this possibility, along with our AC Western Australia colleagues, as AC wishes to evaluate this initiative at national level also. As I stated in last month’s newsletter, we will notify and poll our members if a positive result is achieved, as our Constitution requires agreement from our members before such a move can be finalized. I’ll keep you posted!”

Have you heard of any other parties approached by Cory Bernardi? Drop us a line. You can remain anonymous if you wish.

It’s more than a gaaaaaame. Anyone wondering about why the AFL game between Port Adelaide and Gold Coast was played in Shanghai on Sunday, should go with the old saying and “follow the money”. You don’t need to look much further than the business interests of David Koch and Kerry Stokes. Koch is chair of Port Adelaide’s board and one of Kerry Stokes’ key on-air talents at the Seven Network, (which is owned by Seven West Media, 45% controlled by Stokes’ Seven Group Holdings , which is 73% owned by Stokes’ Australian Capital Equity and associated companies). Koch is co-host of Seven’s Sunrise, one of the network’s most important TV programs, as well as the small business-skewing Business Builders series, also on Seven. The AFL broadcast contract is with Seven West Media and Stokes’ most important media deal.

But also look at Kerry Stokes’ long-term investments in China. His WesTrac group (owned by Seven Group Holdings) controls the distribution of Caterpillar equipment and services in north-east China. In fact, he has closer and longer ties with China than almost any other Australian businessman. Stokes has been invested in China for more than 20 years to varying degrees. His investments are concentrated in and around Shanghai. Besides the WesTrac business (his biggest), he has also been in advertising and media ventures with well connected companies in Shanghai (Shanghai People’s Press was one partner) and Oriental Pearl Group is another. His companies also hold a stake in the Agricultural Bank of China (being one of the earliest, official approved shareholders in the float back in 2010).

George Christensen finally distances himself from neo-Nazis. George Christensen has added another group to the list of people he exempts from his commitment to free speech absolutism. His target this time is American neo-Nazi Mike Enoch, who is set to visit Australia to speak at “DingoCon”, a political convention scheduled for July.

“Like Radical Islamic sheikhs that come here to spread a message of hate, these people shouldn’t be allowed into the country,” the Coalition backbencher told the ABC’s AM program this morning. This was an awkward admission to make, given he’d lent his profile to an interview with some of these “these people” (Australian alt-right podcast “The convict report“) back in February.

Christensen now says that he regrets the interview, and would not have done it if he had known more about the group. “It’s since been pointed out to me they’re extremely anti-Semitic, regularly make racial-based slurs and they subscribe to white nationalism.”

Notwithstanding the fact that Christensen is an adult with access to a search engine (though Ms Tips can attest that #DingoTwitter is a search one feels like wearing protective gloves before undertaking) those traits were pointed out to Christensen at the time by BuzzFeed, and he felt no regret then, saying he didn’t agree with all their views, but then, being interviewed by BuzzFeed didn’t make him a “raving leftie” either. Either way, it seems “DingoCon” (the event at which Enoch was mooted to speak) is unlikely to be graced with a Christensen speech, unlike say, the Q Society. 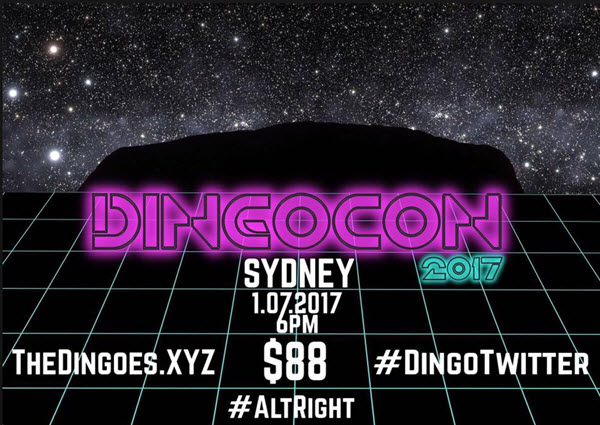