Xi Jinping (C), his wife Peng Liyuan, and Vladimir Putin at the Belt and Road forum.

China will be on the minds of the Prime Minister and many of his cabinet even more than usual this week with the overhyped summit for the overhyped Chinese government “Belt and Road Initiative” (BRI) — planned to link the east and west of Eurasia via road and sea — commencing at the weekend in Beijing.

Critics, including importantly Australia’s defence and espionage establishment, believe it to be empire-building, and therefore a potential strategic threat. Others — such as the Department of Foreign Affairs and Trade, and Australia’s all-talk-little-action business “leaders” — see opportunities. Nowhere, it seems, has the government bothered to explain the environmental devastation and trampling of land rights that BRI projects are inflicting on China’s neighbours.

These are the latest parts of the thorny China puzzle that Australia has left in its box, tucked away on a high shelf, for almost a decade by successive governments whose various departments have, at times, appeared contradictory, hoping it will either solve itself or simply disappear. A whole-of-government China policy is overdue and there has been a collective failure of both sides of the Australian Parliament.

But with the Prime Minister set to deliver the keynote address at the region’s de facto annual summit in Singapore in just three weeks time, the time for ducking and weaving a key issue for the country’s future is over. People who have no concept of what real diplomacy is, or who do not understand nuance, say we must “choose” between the US, our main defence ally and biggest investor, and China, our major trade partner. This is wrong. The question is how Australia balances its interests. To do that, we must be clear about what those interests are.

The Department of Foreign Affairs and Trade is currently writing a rare white paper on foreign policy. The project is being helmed by experienced DFAT staffer Richard Maude. Possibly at the centre of the paper will be some enlightenment on the question: what exactly is Australia’s mid-to-longer term China policy, beyond selling as many rocks, student places, food and tourist services as possible?

The big problem and the reason that every PM since Kevin Rudd has avoided such a debate is that even giving an answer on China and the US will upset someone. And with increasing confusion in Canberra, including a polarisation of views in the bureaucracy — and, of course, then there’s the Donald Trump wild card — the paper now looks increasingly like a no-win for the government, which is, right now, singularly focused on the domestic issues where elections are won and lost.

And so the debate is raging. Here is what Clive Hamilton says about Hugh White’s appeasement policy:

“White lectures us that we must be ‘realistic,’ but what kind of realism is built on a structure of false understandings? He criticises those like Stephen Fitzgerald who argue, just as he does, that 1) China is destined to dominate Asia, 2) the United States’ presence will diminish, and 3) Australia should shift its allegiance away from the United States and toward China.”

“He diverges from them only on their judgment that by getting closer to China we can influence Beijing and shape its policies in our interests. We will not be able to influence Beijing but will have to accept whatever it dishes up. We cannot shape Beijing’s policies; Beijing will be shaping ours. Even so, he says, there’s no choice but to back the economic winner, because if we don’t so choose then we will be forced into it by China’s sheer economic might.”

It is also raging on the BRI. At a closed-door session in Brisbane during the visit of Chinese Premier Li Keqiang, Crikey has learned that Australian defence officials presented the BRI as a strategic threat to Australia.

And, of course, it’s just more debt for China, initially this time off balance sheet and foisted onto unsuspecting, developing world nations.

Cranking up the printing machines for its currency, the renminbi, to offer loans to belt and road nations will help maintain Chinese growth, but this time the national wealth improvement in the “lucky countries” involved, will go precisely nowhere — and China’s elites and the party will be taking it in at an ever-increasing clip, ensuring Gini coefficients and any real economic reform along the road(s) and belt(s) will flatline. And if the loans can’t be paid back, China will take the asset, thanks very much.

And so far the projects are also exporting China’s shocking environmental record, as well as its history of summarily dislodging whole communities with limited compensation. There is pushback in central Asia related to Chinese treatment of ethnic Muslim Uighurs and many projects are in very dangerous places. So it’s worth a good, hard look before leaping into China’s latest economic colonisation project. 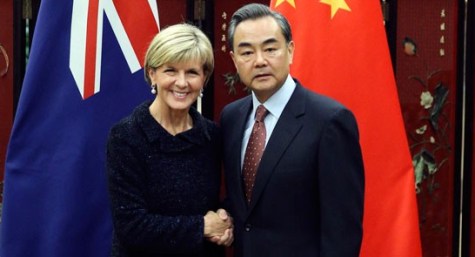 I have never thought of Hugh White as a fool, but this is folly. I have always been suspicious of China and I reckon you count your fingers when they shake hands. I am confident that we need to think very carefully as opposed to dumbass ministers like Robb and Ciobo who think we let them rule us. Chine has historically been a tribute based state and I am not keen to see more of it. No country respects those who crawl.

Interesting article. Worth the price of entry to Crikey today.

Great article.
All this Chinese outward expansion might be moot if people like Michael Pettis are right about the China’s debt and rebalancing problems.
The Chinese economy will have a major financial crisis and it is at that point we shall work out just how competent Chinese policy-makers actually are.
Might pay to study what happened to Japanese overseas initiatives after the collapse of the Japanese bubble.
In relation to the US-Australia-China nexus Australia should continue to ignore White’s admonitions about policy incompetence and policy-makers lack of understanding and continue with ‘walking both sides of the street’. As one of my colleagues suggests, Australia should maintain ‘strategic ambiguity’ and pursue Australian interests.

“Clive Hamilton eviscerated Australian National University professor Hugh White, with a searing take-down of the defence expert’s long-held position that Australia must, effectively, appease China’s military ambitions in the interests of regional peace and trade.”
Mr Sainsbury then goes on to extensively quote from Hamilton’s ‘evisceration’ of White’s lecture. It is obvious from reading both Sainsbury and Hamilton that neither of them have actually read the full text of White’s lecture, and certainly neither of them understand what he was arguing.
White’s argument is in fact a subtle and comprehensive one, in which he poses what are genuine dilemmas for Australian foreign policy, wedded as it has been since the 18th century to first, the British, and since WW2 to the Americans. He does not claim to have the answers. He does suggest however, that there are some serious policy issues that need to be debated. We can neither ignore them nor continue in the hope that the future will be the same as the past.
To describe that, as Sainsbury and Hamilton both do, as “appeasement” tells one more about their profound inability to grasp the real issues than it does about White’s argument.
If Crikey is unable to fairly represent White’s important views, then the least you could do is offer him the space for a rebuttal.
James O’Neill

Will
Reply to  James O'Neill

I agree. Nothing White says in his paper implies we have no choice but to appease a military ascendant China. What White does say is that hard choices vis a vis China and the US will in the future be unavoidable for Australia, that those choices will impact Australia’s moral-political self-identity, and that we must therefore urgently address ourselves to discerning China’s real intentions. But Sainsbury takes those intentions as known, utterly malignant, and hence White as an apologist for a criminal regime. It’d be interesting to get his take on the Trump regime, just how reliable an ally the US would be in a showdown, and Australia’s own moral culpability for a string of recently failing states across western Asia.