... and why we need subeditors.

Today in Media Files, the tributes for Mark Colvin following his death, and Fairfax journalists might be back at work, but where were the subeditors on a CFMEU story yesterday?

Vale Mark Colvin. ABC broadcaster Mark Colvin’s death yesterday was greeted with an outpouring of emotional tributes from his friends and colleagues. Obituaries telling of his his humour, kindness and intellect have been published, sharing what their writers knew of the man.

“He was a stickler for the correct use of the English language. Even today, I’m still reticent to use the word icon or iconic, unless I’m specifically referring to a Russian religious artefact.”

7.30 host Leigh Sales struggled through an introduction to the obituary for her friend last night, saying Colvin would have told her to keep a grip on herself.

“He could have been angry and bitter but I honestly never once heard him say anything like, ‘It’s not fair’ or ‘Why me?’.

I once asked him why he almost never talked about his physical ailments. ‘It’s just so boring, Sales,’ he replied. ‘There are so many more interesting things I’d rather discuss.’

Also in the Oz, Strewth columnist James Jeffrey remembered his friend as “a man of profound depths, but boy was he gleeful splashing through the shallows”:

“Sometimes I loved just listening to him. I mean, that voice. One of the joys of life was hearing that velvet instrument used to produce swear words — something he did with joyful abandon and creativity in the right company. And he was always keen to improve himself even in this area. I have a small collection of Mark’s messages to me that begin, ‘As a connoisseur of invective I thought you’d enjoy …’.”

“When I presented Media Watch, there were times when I needed to test my judgment about some ethical or journalistic issue. Mark was one of the few people I knew I could call who would give me his opinion, straight, considered and wise, and would never breathe a word to a soul.”

Mary-Ellen Field, who donated her kidney to Colvin, wrote of her heartbreak at his death, telling the story once again of her donation in The Guardian:

“A few days before the transplant the anaesthetist called me and asked if I was terrified or excited. I could honestly say I was very excited — I don’t know why — but I was never frightened. Mark and I went out for lunch. Unbelievably, he ordered kidneys. I said: ‘You’re not going to eat those are you?’ He said: ‘I love kidneys.'”

Another veteran, Jim Middleton, wrote for The Conversation on the career he shared with Colvin, reflecting on their time as correspondents on opposite sides of the Atlantic:

“He joined the ABC in 1974, a leather-jacketed, motorbike-riding, Gauloises-smoking devotee of the best of modern music, popular culture and the avant garde. He entered the lower depths of the ABC’s News Division like a youthful escapee from an Evelyn Waugh novel.”

The ABC has also published an interactive piece online called “Let me tell you a story about Mark Colvin”, where Colvin’s colleagues have shared short anecdotes.

Of course, the last word must go to Colvin himself, who had asked his family to tweet one last time after his death:

Fairfax negotiations continue. Fairfax management has still not opened the voluntary redundancy process for staff, but has told the Media, Entertainment and Arts Alliance (MEAA) — the journalists’ union — it will give staff at least 10 days before the voluntary round closes. In a statement from the union, they said Fairfax still hadn’t confirmed when staff would be able to apply to find out how much money they would be entitled to under a redundancy, or apply for redundancy itself. Fairfax announced last week it would cut 125 editorial positions as part of a bid to save $30 million from the budget, prompting a seven-day wildcat strike.

Good feud guide. And following the strike, it’s Peter Dutton v Fairfax in the latest news/politics feud. The Immigration Minister told 2GB listeners yesterday that “productivity went up” during the strike last week: “I think people realise that you can live without reading Fairfax newspapers. I think it’s a better way to lead your life — that would be my advice,” Dutton said. Hywood responded by saying, “Peter Dutton has shown once again why no one rates him.”

Union officials organised blockades of the New Children’s Hospital project in Perth, which was being constructed by building giant John Holland.

As per Fairfax’s report:

“On one occasion, the court was told, as many as 400 protesters blocked access to the construction site’s main entrance, forcing Mr Holland to abandon a massive concrete pour involving 45 trucks.

“The legal action, launched by the Australian Building and Construction Commission, alleged the officials had ‘organised, incited and controlled’ the blockades because Mr Holland would not cede to demands for a ‘whole-of-site’ agreement that paid subcontractors the same rates as employees.”

What being a journalist does to you. It’s never been the most glamorous job, but it looks like George Osborne has found his new role as editor of London’s Evening Standard a bit rough. The former UK chancellor controversially announced he had taken the role earlier this year. And to judge by these pictures, tweeted by politics reporter for UK tabloid The Mirror Mikey Smith, it’s been rough week so far: 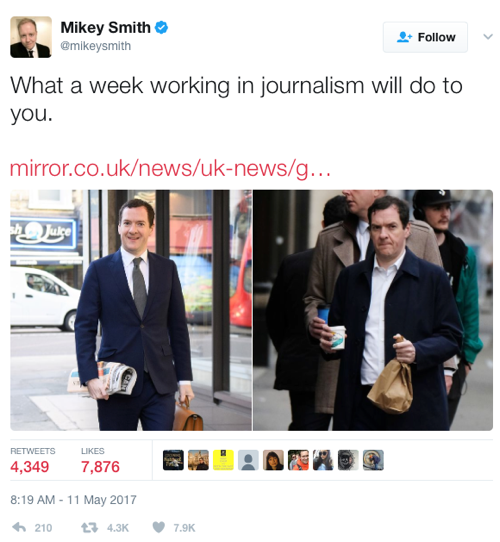 An allegory for our times? Not even the start of the Donald Trump era in the White House could save US ABC sitcom, Last Man Standing, which encapsulates the values of the Trump US rust-belt (now called “The Heartland”).

The main character is a male conservative, devout Christian in the shape of Tim Allen, who is a real-life Trump supporter.

The show appeals to viewers in the Heartland, which helped elect Trump as President and has been energised post-election by rallies and the success of programs such as Shooter (which is about a former army man and sniper on the run. That in turn sounds a lot like the 2007 movie, Shooter, starring Mark Wahlberg).

But Last Man Standing is no more — killed off by ABC after spending years fighting with 20th Century Fox TV about the cost. The program rated OK in the key 18 to 49 demographic (the most sought-after in the US) and averaged 8.3 million viewers a night for its Friday night broadcast on ABC. — Glenn Dyer

Fox counts harassment costs. At last 21st Century Fox has started putting figures on its sexual harassment costs — at least US$45 million since former head of Fox News Roger Ailes was removed in July after numerous and allegations of extremely inappropriate behaviour (which he has denied).

In its quarterly report, filed with the US Securities and Exchange Commission, Fox said that in the nine months ending in March, US$45 million had been paid in “costs related to settlements of pending and potential litigations following the July 2016 resignation of the Chairman and CEO of Fox News Channel after a public complaint was filed containing allegations of sexual harassment”.

Fox also noted in their report that the company has “received regulatory and investigative inquiries relating to these matters and stockholder demands to inspect the books and records of the company which could lead to future litigation”.

These inquiries relate to the non-disclosure of payments in the past (before Ailes was fired) in connection with the settlement of sexual harassment claims involving him and former host Bill O’Reilly. Ailes was reported to have received US$40 million to walk away and O’Reilly US$25 million. There is no sign of the US$13 million paid to settle five claims against O’Reilly (he paid US$9 million to one woman to settle one of those claims).

“Due to the early stage of these matters, the amount of liability, if any, that may result from these or related matters cannot be estimated at this time,” Fox said in the filing, which also said the company didn’t expect any payouts or costs to hurt the bottom line. — Glenn Dyer

Glenn Dyer’s TV Ratings. Nine won overall thanks to the NRL and the AFL Footy Show.  The big story from last night was that just as viewers turned off and tuned out of Scott Morrison’s budget speech on Tuesday night, so too they gave a wide berth to last night’s offering from Opposition Leader Bill Shorten. Last night’s offering was watched by 465,000 nationally on the ABC’s main channel and News 24/ABC News (or whatever it is called these days). That consisted of 346,000 in the metros and 168,000 in the regions. His 2016 Budget reply speech was watched by 798,000 people nationally, perhaps  boosted by the impending long election campaign.

And that brings up a final point about last night — Masterchef did well with more than 1.2 million national viewers and over 870,000 in the metros, but it seems like it is only capable of doing well without any opposition. As soon as Nine or Seven program The Voice or House Rules against it, Masterchef weakens. In Breakfast Today beat Sunrise for the fourth morning in a row in the metros, 287,000 to 272,000, while Sunrise had a narrower than usual win nationally. — Read the rest on the Crikey website

To add to your list of ABC tributes to Mark Colvin, Sabra Lane choked up at the end of AM this morning.

Nice list of Colvin tributes Crikey.
Lots of tears yesterday, still ambushing me whenever I venture on to twitter today.
That lovely fellow’s departure has left a huge hole in journalism. Vale.

If Fauxfux is panning on saving $30M by sacking 125 staff that suggests that they were paid over $200,000 on average.
Not enough for a Masserati like Hywood but certainly generous.