Adult services ads aren't worth what they once were to the newspaper industry, but newspapers have got to hustle any way they can these days.

As the once-great news organisations scramble to find a new way to fund their journalism, there is one category of classified that is still doing its bit for the bottom line in Sydney’s Daily Telegraph.

The adult services section of the classifieds fills a page of the Tele‘s paper just about every day. 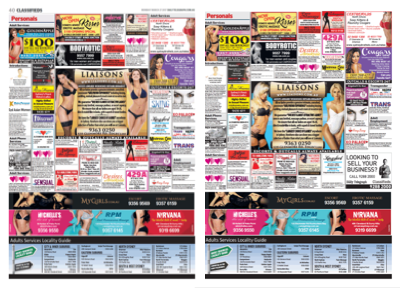 It’s a far cry from the multiple pages that used to bolster the now-defunct The Truth, and it is a fraction of the ads the Tele used to carry. But it’s a steady and reliable source of income for the time being that the paper can rely on to pull through every single day.

Media analyst Peter Cox said that while the adult services ads aren’t worth what they once were to the newspaper industry, the Tele wouldn’t thumb its nose (nor any appendage) at the money, no matter how unsavoury the content is.

“They’ve always been good cash flow items for the publications,” he said. “It’s a commercial operation. They take a little bit of flak every now and again, but they take the cash … Digital disruption has really put a lot of that out of these businesses. It’s very hard to generate revenue for those papers and that’s why they don’t want to let go.”

And that is a lot of cash, compared to anywhere else in the paper, according to Fusion Strategy media analyst Steve Allen.

“It’s very, very valuable real estate to them,” he said. “It’ll be worth four or five times the yield for the page than other parts of the paper … they’re very lucrative for any newspaper and more lucrative than 10 years ago because other revenue has become more negotiable.”

That’s for two reasons: one is the premium of about 25% put on adult services ads, according to Allen (and previously reported by Crikey), and the other is the lack of bargaining power available to smaller, individual advertisers compared to those with large, full-page ads.

“There’s very little that the advertisers of these organisations have to bargain with,” he said. “And these ads are seen as more risky and more controversial.”

But, as with most things print-related these days, the ads’ usefulness to sex workers, especially in big cities, is in decline.

“It’s definitely declined considerably,” Pony said. “Before the internet it was certainly 100% paper-based advertising. It would be less than five or 10% of sex workers now advertising in the paper.”

Pony says sex workers in smaller cities such as Darwin are more likely to advertise in the paper than in Sydney.

“People in smaller towns get the paper every day, it’s still quite ingrained. It’s how information is shared,” she said.

Newspapers are struggling to survive, with cost-cutting at both News Corp Australia and Fairfax Media announced over the past few weeks costing a substantial number of jobs in bids to save $30 million and $40 million, respectively.

In newspapers’ heyday, classified advertising made up a huge proportion of their income — one study from the US said in some cases it was up to 40% — which they lost with the rise of the internet.

Fairfax, News still at war over the job ads

Raunchy ads keep Daily Tele in the black. Now I understand why so many fundamentalist Christians buy the Daily T smut rag.

Does that shit sheet still rely on shock horror sex stories? Perhaps they could use the ads to illustrate them.