Malcolm Turnbull would like to add you to his professional network. Prime Minister Malcolm Turnbull has been trying a new social media policy in recent weeks, but we’re not sure how this one will win votes. Yesterday the media was alerted to the PM’s new title as an “influencer” on LinkedIn, which is apparently a very exclusive club. Why does Turnbull need to be on LinkedIn? Could he be about to be looking for a job? 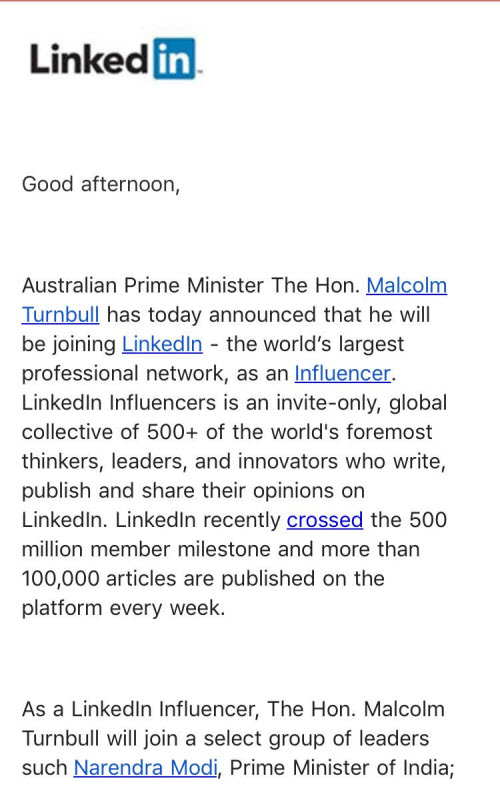 Dicks away, gents. A correction in yesterday’s edition of the Pakenham News, a local paper in Melbourne’s outer south-eastern suburbs, made the admission that a reporter had misheard Victorian Sex Party MLC Fiona Patten when she was talking about Victorian Premier Daniel Andrews and Opposition Leader Matthew Guy. The correction reads:

“Sex Party Australia leader Fiona Patten was quoted in the News on 27 April, calling on Matthew Guy and Daniel Andrews to ‘put their d***s down’. Unfortunately, the reporter misheard. Ms Patten called for the MPs to ‘put their sticks down’.” 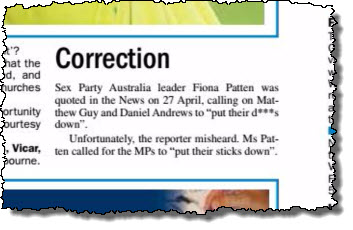 Get well soon, Clive Palmer. Former MP and disgraced businessman Clive Palmer was due to give evidence in the Federal Court today as part of the case investigating the collapse of Queensland Nickel, but the court was adjourned and Palmer is set to appear on Tuesday next week. Earlier this week Palmer turned up to court holding a sick bag and a ventilator mask, claiming he couldn’t give evidence because the medication he was on meant he had no memory. “Because I can’t remember my Amex pin number, for example.” The Australian reports that his medication hasn’t always been so incapacitating:

“But the medication — which Mr Palmer’s doctor Reza Madah said he had been taking since his gallstones were removed in March — didn’t stop him from ordering a complex and secret corporate move to appoint his friend, colourful businessman Domenic Mar­tino, as controller of his China First company, last week.

China First claims it is owed $135m by QN, and Mr Martino also tried to kill a $105m lawsuit launched by general purpose liquidators FTI Consulting against Mr Palmer’s flagship company Mineralogy. Mr Palmer is due back in the Federal Court witness box as early as today.”

Palmer joins a notorious club — dodgy businessman Christopher Skase claimed he couldn’t travel to Australia to face justice due a lung condition, and Alan Bond said he was suffering memory loss in court in 1994. More recently Cardinal George Pell told the royal commission into child sexual abuse that he couldn’t fly back to Australia to give evidence because of health reasons, and in 2011 Rupert Murdoch told a UK government committee he had no memory or hadn’t heard of many details relating to phone -acking at his papers. It’s not hard to see why his claims of illness aren’t received without question.

Utopia at Parli. The halls of Parliament were aflutter yesterday that true celebrities were in town: the cast of Utopia, the ABC Working Dog comedy about the Nation Building Authority, were filming the new season in the press gallery. Considering this government’s penchant for ripping meaningless slogans off other political sitcoms, we wonder if any government staffers were hanging around getting ideas. 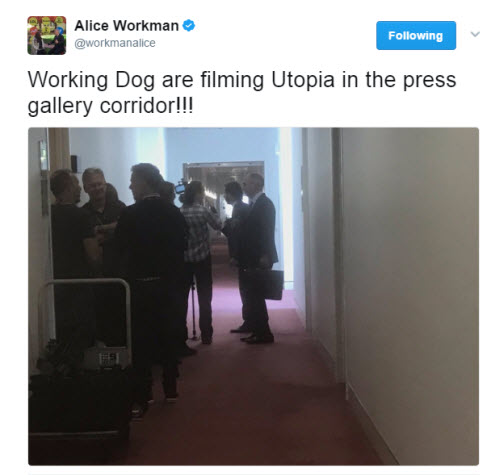